Retirement was approaching for John Wesseling. After running the University of Cincinnati’s in-plant for 42 years, he was looking forward to sleeping late, traveling, and spending more time with his grandchildren. But then something unexpected happened that made him change his plans.

As director of Printing and Duplicating Services, Wesseling had devoted his decades at the University of Cincinnati to building up his in-plant’s reputation. With an offset shop and three copy centers, it could handle almost anything, with fast turnaround times, excellent service, and low costs.

Meanwhile, at nearby UC Health, an affiliated health system, its more loosely managed six-employee in-plant was in need of some changes. With no full chargeback or job tracking system in place, the shop was in the habit of printing large runs, which customers had to store, and then dispose of when they became obsolete. On occasion, that in-plant’s limited capabilities would necessitate it sending work to Printing and Duplicating Services.

John Wesseling (center), director of Printing and Duplicating Services at the University of Cincinnati, stands with Bill Nienaber (left) and Karen Kappen inside one of his in-plant’s facilities.

“We already had done a lot of work for UC Health, so they were familiar,” remarks Wesseling. “We could do things that their shop could not.”

A year ago, he was approached by the director of marketing and communications at UC Health with a very important question: could Wesseling’s in-plant take over the printing for UC Health?

Wesseling knew it would be a massive undertaking. The UC Health system included three hospitals and 20 clinics. Print volumes would increase dramatically.

He thought about his upcoming retirement — well deserved after his success in building the in-plant up from one copy center to its current four-shop operation. He pondered his plans to spend more time with his community theater group and putter in his new garden.

Then he thought about his staff.

“A lot of these people have helped me bring it to this point,” he reflected.

He had already saved his in-plant once from an outsourcing push by a vendor. He didn’t want to see that happen again after he left. So out of loyalty to his staff, and wanting to ensure their future employment, Wesseling opted to put off retirement and move full steam ahead into integrating the two in-plants.

“I couldn’t walk away… when there was an opportunity to make sure that my staff had an opportunity to succeed,” he explains. “I had to grab this volume for my staff, to leave them in the best possible place, and that’s the reason why I’ve stayed an extra year.”

So last year, UC Health closed its in-plant, with Printing and Duplicating Services’ help, and Wesseling’s operation took in some of its equipment, including:

“Our digital volume actually doubled since December,” he reports.

Thanks to the Konica Minolta equipment his shop inherited, the in-plant can easily handle this new volume. 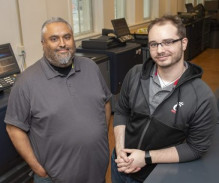 Carlos Trujillio (left) and Evan Harper stand with some of the in-plant’s Konica Minolta equipment.

“We’re able to really crank out the work,” Wesseling says.

The in-plant has since added a fourth copy center.

One big change for UC Health customers is being charged for their printing, which they previously never worried about, resulting in a lot of waste as customers ordered more than they needed. If they make a mistake and need to reprint a job, Wesseling says, they now have to pay for it, so customers are learning to be more responsible. All this is reducing costs for UC Health, while generating revenue for the in-plant’s future upgrade needs. It has also given the in-plant more flexibility to handle large jobs, which might have been outsourced in the past.

So far, the in-plant merger has been a big success, and Wesseling has no regrets about putting off his retirement.

“I could not walk away [from] this opportunity to literally double our duplicating volume overnight,” he says. “It makes the system stronger and protects the people who are running the system, who deserve to be protected.”