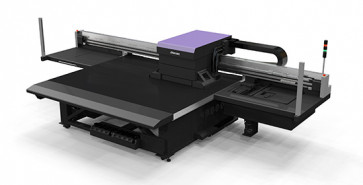 At a virtual launch event on October 20, Mimaki launched a range of new products for the wide-format market, including a new flatbed printer.

Kicking off the event, Naoya Kawagoshi, president of Mimaki USA, said a few words about the state of the industry, noting “As you know, the U.S. economy is recovering strongly as we have almost overcome COVID-19. Thanks to those circumstances, Mimaki USA was able to hit record high numbers in both sales and profits in the first half of the year.”

That said, he continued, “the biggest environment of our manufacturing industry is becoming more and more difficult. In addition to the overwhelming surprise shortages of parts such as semiconductors worldwide, it is not clear when the supply chain collapse will be resolved. At this moment, it is hard to foresee when we can fully achieve a stable supply of product from the Mimaki factories around the world. But even so, Mimaki never stops. With all the strengths of the group, we will continue to develop new products and solutions. And today will start releasing new products for the Americas market.”

He was followed by Ken VanHorn, vice president of Mimaki USA, who kicked off the slew of new product launches the company had to share. “Mimaki’s investment in research and product development, coupled with our engineering expertise and history of developing revolutionary products, has established us as the leader in the UV printing market,” he noted.

Talking about the new flatbed printers, he said, “Both of these new products take digital flatbed printing to the next level by offering high quality output at unbeatable speeds. …In an increasingly competitive market, Mimaki is your ally as you continue to differentiate your business and produce your most exciting, creative, and profitable projects yet.”

Michael Maxwell, corporate strategic development, Mimaki USA, then took the stage to introduce the brand new JFX600-2513 UV flatbed press. “It is a combination of the popularity of the size of the JFX200 for the print area, but it’s all the bells and whistles that have been incorporated into the JFX lineup with some stuff that’s really carried over from the JFX500. So, this product is more or less a direct replacement for the JFX500, and it is a companion product to the JFX200,” he said. “It’s going to make sure the JFX lineup has everything you need, whether you’re a startup, or a professional printing house that has a lot of throughput needs.”

The flatbed press features 16 printheads, with a maximum media size of 98.4x51.2”. It uses the company’s MAPS system for variable dot output, to help improve the print quality and reduce banding, and it uses six inks, plus slots for white, clear, and primer. It can run a maximum of 2152.7 sq.ft./hr. in 600x600 dpi, 2-pass draft mode, and 376.7 sq.ft./hr. in its highest quality, 1,200x1,200 dpi eight-pass mode. The JFX600-2513 also uses the company’s MPC control center, which allows operators to control the entire print operation easily from a single on-device screen. 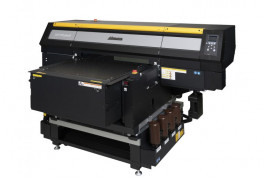 The second printer launched at the event was the UFJ-7151 Plus II for printing promotional products, an update of the current model UFJ-7151 plus, and brings some new features to the table, noted Maxwell. A few of the new updates include the Mimaki Advance Pass System, which helps improve image quality, as well as a 4-axis drive table, which provides increased weight capacity and individual motors for more accurate leveling and reduced vibration during printing. “Just like the other UFJ-7151, it has the ability to support all kinds of objects up to six inches, and it’s got a pretty large table,” Maxwell said.

“This machine is a bit unique in the UJF lineup in the table design,” Maxwell continued. “This table design has a 4-axis drive table mechanism with a ball screw, so it’s ultra-precise, it has the ability to hold some heavier materials … it has an update to the weight capacity compared to the previous models.” Instead of the 22 pounds the previous models could support, he noted, this one can support up to 66 pounds of weight. “There’s a lot of different objects you can put on here, and a lot of different things you can do with it,” he said. It also has eight printheads, in either six- or four-color setups, and can produce up to 1,800 dpi, allowing them to not only produce precise printing, but very fine details.

Maxwell also noted that another unique feature of the printer is the ability to create a gloss UV — not a clear overlaminate, he stressed, but a gloss UV effect by controlling the lamps and using Mimaki’s inks. “You’re able to produce glossy prints with colored UV ink,” he said. “That’s unlike any other machine in the market. Most UV ink has a little bit of a matte look to it — some are a little more semi-gloss than others — this one can produce a true gloss image with color without having to do a clear overlay. That is a game-changer in this series, and it’s a game-changer in the market.”

Mimaki also highlighted the UJF-3042 Mk II e. The e series, Maxwell said, brings everything customers have come to expect in the line, “with a little bit extra.” The first change is that the machine has been redesigned for better visibility at distances, with a clear front panel that allows operators to more easily see the print as it is produced. Other new features include a better cleaning mechanism, a new LED lamp array for tighter control over the curing process, and making sure the table is designed for a wide range of jigs — including those from other manufacturers. 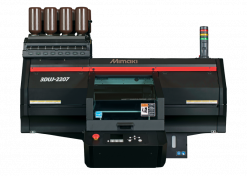 Finally, Maxwell introduced the UJF-6042 Mk II e. “This machine has some real key features,” he noted. “It’s one of the most popular models in the lineup for the UJF series … and it’s a trendsetting product. Rather than take a complete refresh of what is already working very well for all of our customers, we wanted to look at some of the things that could really make the 6042 Mk II e gain you that extra capability, and a little bit of the extra features that you want.” The 16.5x24-inch printable area, he noted, allows for a very wide range of products, with more “real estate to work with, and it gives you the ability to print on larger objects.”

While not new, Maxwell noted that Mimaki has also started shipping the 3DUJ-2207 3D printer in the North American market as well. “This printer, with 10 million possible color combinations in a three-inch build height, on and 8x8-inch build area, really gives a lot of creativity to the 3D world in a full color arena.”

Three New Challenges of the New Normal
Reopening Of America: What Will This Look Like For Businesses Across The US
END_OF_DOCUMENT_TOKEN_TO_BE_REPLACED
Upcoming Webinars
Turn Data into Dollars