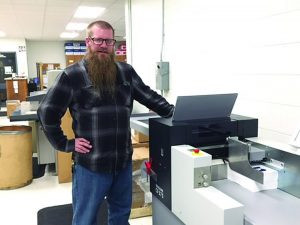 You wouldn’t think a prison lockdown would have much of an effect on a community college in-plant. But when the folding machine your in-plant wants to buy is only running at one shop in town, and that shop happens to be inside a prison, if you want to get a demo, you’re more or less at the mercy of the correctional services department.

When Southeast Community College Production Printing was considering a new Duplo CF375 Foldmaster Touchline to replace three older devices, the Lincoln, Neb., in-plant learned that the only CF375 with the features it sought was located in the Nebraska State Penitentiary’s in-plant. Though the prison in-plant was willing to let the college see it, every time the in-plant’s mechanic scheduled an appointment, it was postponed due to a lockdown.

After some perseverance, though, the community college finally saw the device in action and was impressed. In the fall of 2017 it installed the high-volume creasing and folding machine, which can process up to 6,000 sheets per hour.

Getting the new folder not only improved the shop’s productivity, it helped relieve cramped conditions that came about after the shop was relocated in 2016 and lost about 1,100 sq. ft. of space.

The Duplo CF375 replaced devices that were more than 30 years old — a perforator/scorer, a tabletop folder and a Baum floor model folder that Production Printing Supervisor Lisa Vosta describes as “old and tired.”

Because of the bottleneck caused by the three old devices, Vosta explains that many times the in-plant would end up using the folder on its copier, but that “it was just a band aid” for a larger workflow problem.

In the end, it was easy to write a justification report, Vosta says. She explained the benefits of replacing the three aging devices with one new device that would save space and accomplish the same amount of work.

Jams are minimal with the Duplo CF375, she says, troubleshooting is easy and the learning curve was solved with video training and a manual.

“Folding and perfing have never been better for us,” Vosta proclaims.

The device has even brought in new work, such as specialized invitations for students and events.

Overall, Vosta says she would recommend the device for a small shop that needs perfing, scoring and folding in an easy-to-run, low-maintenance solution that doesn’t take up a lot of space. She also lauds its fast setup time and safety features.

“I have never been more impressed with a machine,” she concludes. “I didn’t know it could be this good.”

Three New Challenges of the New Normal
END_OF_DOCUMENT_TOKEN_TO_BE_REPLACED
Upcoming Webinars
Print Outlook: What to Expect in the Year Ahead