Faster speeds are one great benefit of getting new equipment, but being able to provide products you couldn’t in the past is what really makes an upgrade worthwhile. 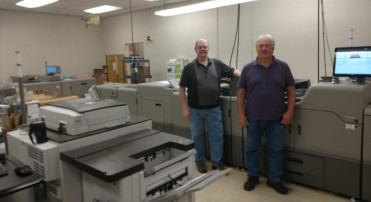 When the State University of New York (SUNY) at New Paltz replaced its older Xerox and Ricoh printers with a Ricoh pro C7210 color printer and a Ricoh pro C8210 black-and-white printer in February, productivity certainly increased for the seven-employee Print & Mail Services operation. But Manager Jim Lyons says the new in-line binding features are what really stand out.

One project in particular made Lyons feel good. An art student ordered two books to show off his work to potential employers.

“He said he actually got a job offer after they saw his book,” Lyons says. “They thought it was so professional looking.”

Successes like this are what he hopes will launch the in-plant into a new line of work: printing view books for Admissions. Currently those are ordered by the thousands from off-campus printers. Lyons is proposing printing shorter runs in-house, using the C7210 and its square fold booklet maker.

“We’re looking into that to see if that’s a way to make things more flexible for them — and cost effective,” he says.

Already the inline Plockmatic double coil punch is paying dividends on the in-plant’s course pack and lab manual work. The shop can now print them two-up on an 11x17˝ sheet, punch both at once and then cut them in half.

“We’ll do half the clicks at a faster pace,” he enthuses.

“It registers so nice compared to our old machines,” he says.

Beyond this work, the in-plant is also doing a booming business in wide-format printing with its HP DesignJet. A recent art department project had the shop printing 60 photos of student artwork. Without the HP DesignJet, he says, “all that would have been [done] off campus — at four times the cost.”

Related story: Printed Course Packs On the Rise at SUNY