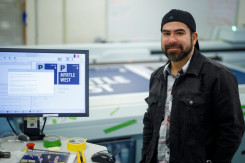 “When we determined that there was no place that was going to print these things up the way we wanted them to be — the way I envisioned them to be — I started looking at equipment,” Reid reveals. “We’ve been looking … for about three years. We figured out pretty soon in the process that everyone wanted to wrap all of our existing aluminum signs in vinyl, and then shrink wrap them on there, and have more stuff go into our landfill, and I was against that.”

Reid pushed to get equipment that would allow the sign shop to print on existing signage rather than developing new signage, promoting reuse and preventing more material from entering landfills.

The sign shop has begun running with an Océ Arizona 1260 GT with roll media option; an HP Latex 570 roll-fed printer with an HP cutter; and a Colex CNC flatbed cutter. The Océ Arizona 1260 GT printer allows the shop to print on various rigid substrates. 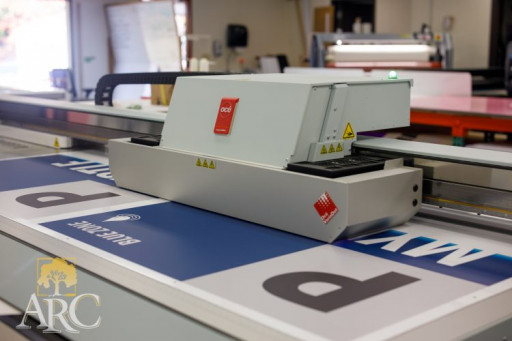 “I took the door off the hinges and printed an image on my door,” Reid reports. “Anything that’s flat. So we’ve been printing on Falconboard, which is like an engineered cardboard, and sheets of aluminum.”

Those signs are then cut using the Colex CNC cutter.

“We have three different thicknesses of aluminum,” Reid continues. “We’re going to be making signs up out of reach, because they’re so weather-resistant. They’re going to be four foot signs that go up around our lights poles. We’re renaming our parking lot, and we can’t put the signs up on our campus to a parking lot that’s not named correctly.” 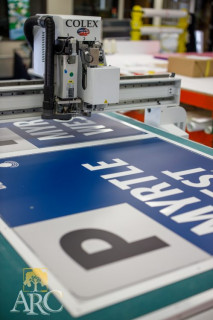 The HP Latex 570 printer is one of the in-plant’s latest investments, and has not been put to use the same way the Océ Arizona has, but Reid has plans to take advantage of it.

“We just got training on the HP Latex, so that’s been sitting here not really functional or working,” Reid says. “But now that’s it’s up and running, we’re going to use it for a lot of stickers. I’ve got fabric stickers and paper stickers. We have window clings that we’re able to put into the 570 that we haven’t used yet. We have some window wraps.”