Offset Endures and Thrives In Missouri

Many higher-ed in-plants retired their offset presses long ago, but the offset process remains the bedrock of production for University of Missouri-Columbia (MU) Print & Mail Services, the country’s 10th largest university in-plant, ranked by annual sales.

“Seventy percent of our revenue is printed offset,” declares Director Jeff McNeeley, who took the helm of this 40-employee in-plant four years ago after the retirement of long-time director Rick Wise. With more than $7 million in annual sales, that comes out to $4.9 million in revenue from offset — certainly nothing to sneeze at.

Much of the shop’s offset work is signature-based, saddle-stitched booklets in press formats and quantities too large for digital devices to handle. These materials, with their largely static content, are essential for recruitment and other kinds of university outreach.

For many years that work was printed on the in-plant’s six-color, 40˝ Heidelberg Speedmaster 102, installed back in 1998. After 21 years of loyal service, though, that press “was starting to exhibit some issues that we couldn’t figure out how to fix financially,” McNeeley explains. A digital replacement wasn’t an option because, in his estimation, “there is no productive way to do 16-page signatures in a digital world.”

Deciding on a replacement press was a long process.

“Our team did a thorough analysis of our needs,” McNeeley says. “We evaluated inkjet and digital and found offset offered the best solution to produce high-quality printing the University of Missouri departments demand.” 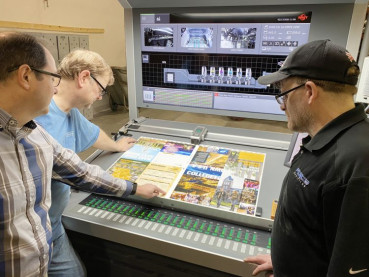 In October, the in-plant installed a five-color RMGT 940 press with LED-UV coating and curing. The positive difference the new press has made, McNeeley reports, is twofold: notably better print quality and production efficiency; and a welcome morale boost for press operators, who find the RMGT 940 a smarter, more satisfying machine to print with than their old iron.

A Game of Inches

Going to a 29˝ format was contemplated as a way to save money, but the downside of a 29˝ press, McNeeley notes, was the fact that “our bindery is completely set up for 16-page signatures, and we would need to re-tool to eight-page signatures.”

McNeeley found a way out of the dilemma in the 25x37˝ maximum sheet size of the RMGT 940, a format that, according to the manufacturer, enables full-color, eight-up printing for the cost of six-up. The claim, avers McNeeley, is “absolutely true.”

“We print 16-page signatures daily on this press. An 8.5x11˝ page with bleed prints comfortably eight-up on a 24x36˝ press sheet,” he says, noting that the sheet cost per thousand at this size is smaller than that of the 25x38˝ sheet commonly used for 16-page signatures. But, says McNeeley, there’s still a role for the larger sheet when the layout of a job requires utilizing the full 25x37˝ sheet size of the RMGT 940. Then, it’s most economical to trim an inch from 25x38˝ stock and run the job on that.

To support the new press, the shop acquired a CRON-ECRM thermal CTP unit with multiple autoloading trays and an inline punch. A closed-loop system from the Kodak Prinergy Suite was added to channel CIP4 job data to the press.

None of these investments was made hastily. McNeeley says that after he and his team received permission from the university to seek bids, they spent months performing pro forma reviews and calculating ROI for equipment from the three press vendors being considered. They also previewed the press they ultimately would purchase in site visits: once to see an almost identical model being installed, and once to see another copy of the press running in place. 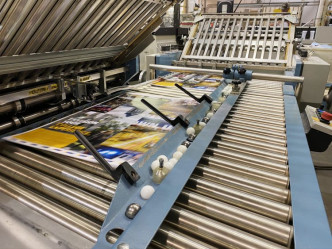 Bringing the shop’s lead press operators along on the visits helped them to overcome whatever level of discomfort they might have been feeling at the prospect of having to switch to a new press platform, McNeeley says. He adds that his own interest in the RMGT 940 surged “when I found out I could get a 16-page press at a price point less than 40˝.”

His enthusiasm caught on.

“We had a real need for this investment, to continue supporting the university mission,” McNeeley says. “Once that became obvious to upper management, the support was there.”

With the 16,200-sph straight-printing RMGT 940 in full operation, it was time to retire the six-color, 40˝ press as well as a half-size two-color machine. Supplementing the RMGT 940 is a vintage but still capable two-color, 40˝ press. Because of the size compatibility of the RMGT 940, it hasn’t been necessary to re-equip in postpress. 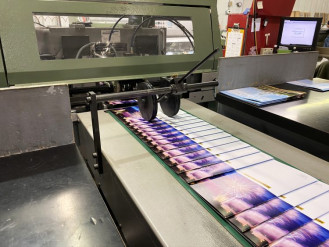 Booklets printed on the RMGT 940 press move through the nine-pocket Muller Martini saddlestitcher.

“Anything our customers need, we have a way to produce it for them,” McNeeley declares. Only now, thanks to the capabilities of the new press, the work is being done with what he calls “a vast improvement in production efficiencies.”

“The closed-loop color management is a night-and-day difference from our old workflow,” he says. “It allows prepress data to be directly loaded in the press so it can pre-ink the job, decreasing makeready times and reducing makeready waste.” He notes that makereadies that used to take up to an hour on the legacy 40˝ press now can be completed in 15 minutes on the RMGT 940.

Although installing a UV press wasn’t the initial plan, the RMGT 940’s ability to instantly cure inks and coatings on press has proven to be one of its strongest advantages.

“Being able to go straight to a cutter or a folder has already paid some huge dividends,” McNeeley contends, citing a recent job that consisted of 30,000 saddle-stitched, 52-page booklets printed in reflex blue. The job was a rush order — and a tall one, considering the color to be used.

“As many in the industry know, reflex blue simply won’t dry, making the press sheets difficult for the bindery to handle,” McNeeley says. “To remedy this, we ordered LED-UV reflex blue for our RMGT press. This allowed us to print the sheet and immediately start folding it. At one point, we had product on press, the folder, and the saddle stitcher all at the same time.

“That just would not have been possible with our legacy presses,” he concludes.

But, LED-UV curing is about more than just fast trips to the bindery; it also takes print to a new level of excellence.

“The dot quality is superb as it is instantly dry, leaving no dot gain,” McNeeley says. “Uncoated sheets printed with the LED-UV look amazing.” He calls the extreme durability of the cured sheets “insane — unlike anything I’ve ever seen.”

The RMGT 940 at MU Print & Mail Services remains something of a novelty there, and McNeeley says that he, his press crews, and campus creatives are still experimenting with what it can do. In the meantime, the in-plant has its hands full producing booklets, direct mail, post cards, brochures, newsletters, pocket folders, and stationery for the “Mizzou” community of more than 32,000 students and faculty.

Established in 1935, and now operating with a full-time staff of 40, the in-plant prints from two facilities: a 50,000-sq.-ft. main plant located off the Columbia, Mo. campus, and a smaller, walk-in site in the library. Digital output, which accounts for about 25% of revenues, is provided by a Xerox iGen 4 and a Xerox Nuvera. The shop also has an OKI digital envelope press for short runs of that item. 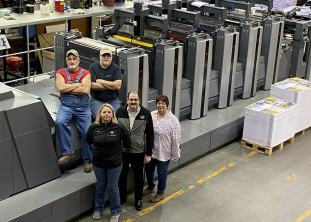 For now, the main spotlight is on the RMGT 940, which McNeeley praises as “a once-in-a-career type of purchase — a good investment, a solid machine that we expect to have around for 20 years.” But, his admiration isn’t based only on how well it prints.

There’s also the lift it has given to the people who run it. McNeeley says that with the 40˝ press the RMGT 940 replaced, there could be “a lot of struggle to keep things in line,” and the strain on the press crews was beginning to show. The RMGT 940, on the other hand, “allows for consistency among multiple operators” by virtue of its closed-loop color control and its automation features — advantages that have put the task of offset production in a new and more favorable light.

“One pressman told me that this purchase may have extended his career five years longer than he thought,” McNeeley says. Everyone else seems to have been similarly impressed by what the investment represents.

“This purchase has inspired a lot of synergy among the workers,” McNeeley observes. “It has solidified in their minds that upper management sees us as important, and that our jobs are secure.”

The basic distinction between conventional and LED-UV comes from the position that each occupies in the electromagnetic spectrum, where UV (ultraviolet) radiation falls between visible light and X-rays. The UV wavelengths of interest to printing are UV-A, UV-B, and UV-C, which differ by the depths to which they can cure.

When UV wavelengths strike compounds known as photoinitiators in UV-activated inks and coatings, the fluids dry and harden almost instantly. This process, called polymerization, takes place within one range of wavelengths for conventional UV lamps and within another for LED-UV arrays.

This means that inks and coatings have to be formulated differently for each set of wavelengths, creating two types of solutions and leading to two different classes of consumable products.

Lamp-based UV is a long established, widely used process supported by a broad selection of inks and coatings for color and special effects. Its perceived drawbacks have mostly to do with the nature of the lamps, which contain mercury, generate heat and ozone, and consume large amounts of power.

Compact LED arrays cure rapidly at lower power with no worries about mercury or ozone. The arrays last a long time and are easier to retrofit than lamp-based systems. As the newer of the two processes, however, LED-UV does not have as many inks and coatings to work with as conventional UV, and the fluids with which it is compatible are more expensive.

LED-UV’s principal advantages include instant drying, minimal heat transfer to substrates, elimination of ozone and solvents, and long diode life — as long as 20,000 hours. Unlike conventional UV lamps, LED-UV units switch on instantly without a delay for a ramp-up to full power. Also, LED-UV exposure can be formatted strictly to the area to be printed, instead of illuminating the entire sheet as a conventional lamp does.

University of Missouri Ready for Next Challenge