With a four-color Presstek DI press, a two-color, 40˝ Heidelberg and a Xerox iGen4, Penn State University’s Multimedia & Print Center seemed to be equipped for jobs of every length. In reality, though, mid-size work was causing headaches at the central Pennsylvania, in-plant. 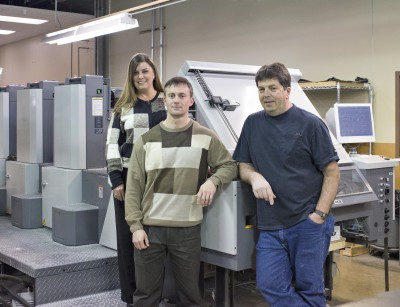 An eight-page magazine, for example, could either be run on the quarter-size Presstek DI as two separate forms, or on the 40˝ Heidelberg as one form, two-up, but with a second pass to include all four colors.

“Either of those made it less efficient,” insists Director Abbas Badani. Productivity plummeted as smaller jobs waited their turn on the Presstek DI while it was busy printing mid-size work.

“Our constraint was the press,” says Badani. “The prepress and the bindery were both ahead of the press.”

In September the 55-employee in-plant resolved this issue by installing a new four-color, 23x29˝ Ryobi 764E press. Now four-color magazines, newsletters and brochures in the 5,000-12,000 range go right to the Ryobi, leaving the DI press for smaller jobs and creating a smoother workflow. Work is not only finished faster, but the in-plant is bringing more jobs in-house. Badani estimates that 10-15 percent more offset work is now being done by the in-plant.

“It has definitely opened up some capacities,” he says. 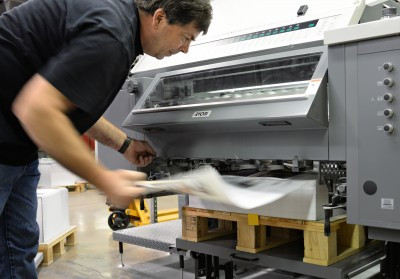 Since all Penn State printing gets bid through a print portal created and run by Badani, he is well aware of which jobs are being outsourced and how long they are taking to produce. To justify the press, he used this data to calculate the cost savings and improved turnaround time that the Ryobi would bring to the university.

Ironically, Badani signed the deal for the press just before he attended last April’s Inkjet Summit. After learning how far along inkjet technology has come, he admits he had some second thoughts about the press. Still, he says, the Ryobi is working out well for the in-plant.

“For us it was a good fit in terms of improving the workflow,” he says. “The bindery used to wait for the press. But since we put this in, it’s all flipped. The press is now ahead of the bindery.”

That now gives him a new challenge: “What can we do to improve the bindery workflow?” he muses.