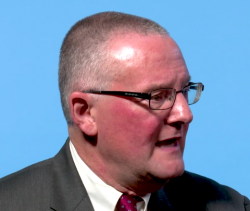 "I think we are headed for a slowdown," warns SGIA Chief Economist Andy Paparozzi in a new video interview. While he stops short of presaging a recession, he advises printers it's time to prepare.

While acknowledging that first-quarter GDP was up, he notes that the economy was not as strong as that suggests. Consumer spending and business investment only grew by a small percentage, which he finds troubling. Over the next 18 months, Paparozzi expects the economy to grow just 2%, not 3%, which will reduce GDP.

"The trade disputes have the potential to make the slowdown even more significant," he adds.

Find out why, and learn how you can prepare in this new video.

SGIA March 2020 Economy Watch: How to Protect Your Business in This Time of Uncertainty

Heidelberg to Cease Production of VLF Offset Presses, Primefire; Will Cut Up to 2,000 Jobs

HP Board: 15 Reasons Why HP Shareholders Should Reject Xerox $34.9B Acquisition Offer

War Between RR Donnelley and Its Largest Bondholder Escalates