Preparing Students and His In-plant for the Future 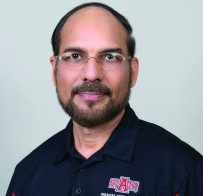 Born and raised in Fatehgarh, Uttar Pradesh, India, Arkansas State University’s Director of Printing Services Pradeep Mishra says printing was not even on his radar when it came to potential careers.

“Most Indian parents, especially at that time, wanted their kids to be doctors and engineers, so printing for me wasn’t even on the horizon, and no one in my family had ever worked in printing either,” Mishra says.

So, naturally, Mishra pursued the path of engineering and even got a two-year degree in physics, chemistry, and mathematics from Kanpur University in 1978.

Then Mishra’s father fell ill, and everything changed.

“Obviously, going in that direction takes a long time, and I still needed to complete a five-year engineering program,” says Mishra. “My father was sick. He had been having heart issues, so being the eldest son, the question came: ‘do I want to wait this long to become an engineer, or do I explore something else?’”

While none of Mishra’s family had experience in the printing industry, a friend of his father’s did. “Uncle Tiwari,” as he affectionately called him, encouraged Mishra to give the path a chance. Mishra took printing courses at the Northern Regional Institute of Printing Technology, in Prayagraj, Uttar Pradesh, India. The intensive program was three years long, and Mishra completed it in 1984, earning a diploma certificate in printing technology. 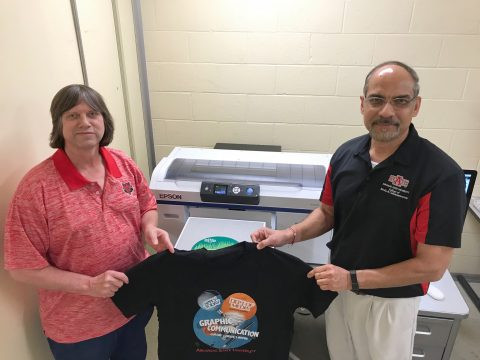 From there, Mishra went on to complete his first hours of management training with Maya Enterprises, a New Delhi printing company. It was during this training that he says he started to really learn the ropes of the industry.

“It amazed me how the whole thing worked. All of this creativity, and every day was a new challenge. I was a bachelor at the time, and this company hired five of us from the college, and we all stayed in one house that the company provided,” Mishra says. “It was so fascinating, and even when my shift was over, I wouldn’t go home. I’d stay with the second shift and just keep learning and learning, and I did that for about four years.

“Those four years, I really learned a lot,” Mishra continues, “and what I learned in four years, people sometimes may not even learn in a decade. It was life-changing, and it made me really sit back and think, ‘this could be my career.’”

The Journey to Arkansas

Because India didn’t have a degree in printing technology at the time, when Mishra caught wind of a scholarship the Indian government was offering, he knew it was an opportunity he couldn’t miss.

“The Indian government was offering a scholarship for certain fields of education that were not offered in India, so since printing was one of those fields, I applied,” Mishra says. “I got selected, and I was one of four people from my country chosen to go to the United States.”

Mishra attended Arkansas State University and completed his Bachelor of Science in printing technology as well as his MPA. His scholarship had one condition, though: he had to return to India and work for at least five years. Before he left Arkansas State, however, he went to the department chair and left his resume, just in case.

Mishra returned to India and became a plant manager for R.R. Donnelley, in Mumbai, which was Tata Donnelley at the time. It was a 24/7 operation with more than 5,500 employees that he managed for about seven years — until he got a call in the year 2000 from Arkansas State.

“They told me that they had a position there for me if I was interested in going there,” Mishra says, “and within 15 days, my family and I put anything and everything we could into suitcases and moved to the United States.

The main motivator for moving was his children, Mishra says. Though he had a good job with the largest commercial printing company in the world, he thought moving to the U.S. would be a great opportunity for his children and their education. But it was a move full of mixed emotions.

“We sold everything we couldn’t bring, and what we could bring, we had to fit into eight suitcases between me, my wife, and my two kids. We started from scratch here,” Mishra says.

His children experienced a bit of culture shock, he says. They were so used to the bustling world of Bombay that the sleepy suburban lifestyle of Arkansas was a jarring contrast.

“We went from a city with a population of almost 15 million people to a town with 50,000 people,” Mishra says. “And here, there’s a curfew after 6 p.m. while in Bombay, it’s a city that never sleeps.”

From Printing to Teaching

Another adjustment Mishra had to make was going from managing a printing operation to managing college students.

“I never planned on teaching. That’s why I never went for my doctorate or anything like that because to be in the industry, you don’t need anything like that,” Mishra says. “But as I started teaching, I discovered that I really enjoyed getting students prepared for the printing industry.”

Mishra says that teaching, while he did enjoy it, was a big change from his previous position.

The pressures are different, he says; in printing, the deadlines may be more harsh, but with teaching, he was solely responsible for creating a curriculum that lasted more than an hour, twice a week.

“It took a couple of semesters for me to really get into the flow of things. I already knew the material inside and out. It was just a matter of piecing it together and mapping out a plan,” he says.

As an educator, Mishra takes pride in preparing his students for the future. Seeing them go on to have successful careers in print is something he holds near and dear to his heart.

“After coming here and teaching for the last 22 years, I’ve probably taught around 1,000 students, and each and every one of them is doing something in the industry,” Mishra says.

Because he knew the printing industry so well, it came as no surprise when, in 2007, Mishra was approached by the university to take over it’s in-plant — the very in-plant in which he had studied in the 1990s. Since 2007, his job has been split: he’s 50% educator and 50% director of Printing Services.

While going from managing 5,500-plus employees at Tata Donnelley to a 10-employee in-plant does strike a contrast, it was one Mishra embraced.

“Since it is smaller, it’s almost like a family atmosphere, so everybody helps each other out, and we all come together to get the job done,” Mishra says.

In the past five or six years, Mishra has overseen the implementation of digital printing and automation technologies as well as direct-to-garment machines. But current industry challenges are also having an impact. For example, several operators retired last summer, and he’s still struggling to replace them. Then there are the paper shortages; recently, his in-plant was only able to print 5,000 of the 35,000 commencement ceremony pamphlets ordered by a local college.

But Mishra has been in the business a long time, and while the printing industry is facing challenges, he believes it is still moving in the right direction.

“I’ve watched the industry change over the years, and the workflow has only gotten better,” he notes. “Before, it was much more manual, and there were all these moving parts, and turnaround times were so slow, but now it can all be done at the click of a button and jobs can be turned around within hours. It’s for the better.”

Learning — and Earning — With T-Shirt Printing