Washington State University (WSU) understood the value of a good Print MIS system. Its Design and Print Services operation had been operating one for many years. As the Pullman, Washington-based in-plant expanded, however, it outgrew the capabilities of that system. So, when Edward Sala took over as assistant executive director for University Marketing and Communications — which includes Design and Print Services (DPS), Mailing Services, and the CougPrints student printing program, among other departments — looking at replacement options was a high priority.

The old print MIS, he says, “just wasn’t a good fit for our shop. We didn’t use a lot of the features, and it just didn’t fit in our organization.”

Not only that, the in-plant had just lost several key personnel to retirement, leaving it shorthanded.

“We had a huge vacuum to fill,” Sala notes. “I got promoted … and gathered up the people in the organization and started to brainstorm how we would get through. Plus, our business was changing right before our eyes — the number of projects was through the roof, and print runs were going down at a drastic decline.”

Rather than hiring — and training — several new employees, the in-plant instead looked into automation. It ultimately decided to submit an RFP for a print MIS system that would help manage everything from inventory and design, to project management and production.

The proposal got four strong responses, Sala notes, and there was some fierce debate about which was the right fit, but ultimately the operation decided to go with PressWise from SmartSoft. The SaaS-based print workflow system provides print estimating, workflow automation, print MIS, Web-to-print, shipping, and mail preparation.

“This one was just the best match for our workflow,” Sala says. “There are as many workflows as there are in-plants, so there is not one software solution that will be a perfect match for everything you need. You have to find the one that fits the best — and that’s where the journey begins.”

From Good to Great

With 13 full-time employees, DPS is a busy operation. It runs an HP 10000; a Ricoh Pro 7210 with a 5th color station to add silver, clear, and white inks; a Konica Minolta 1100 for envelopes; and two wide-format printers: a Mutoh ValuJet and an HP Latex 370. The shop prints a variety of items for WSU: recruitment materials, postcards, envelopes, brochures, posters, booklets, paperback books, and more, and provides installation of wide-format graphics. DPS is part of University Marketing and Communications, which has 64 total employees.

One thing that really stood out to Sala about PressWise was the fact that SmartSoft was willing to work with DPS to tailor the software to the operation. 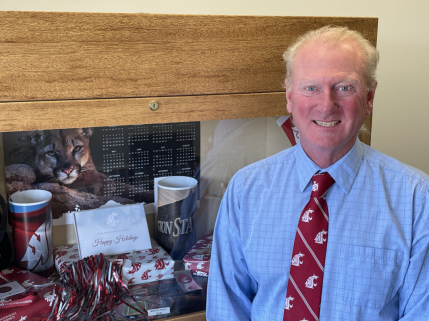 Ed Sala, assistant executive director for University Marketing and Communications, says PressWise has brought a number of improvements, including the ability to easily kit projects together, quickly reprint old jobs, and communicate with customers directly from the system.

“They are willing to make modifications to the code to help fit our workflow better,” he explains. “We have a great relationship with their tech people. They are very responsive.” SmartSoft has a ticket system where users can submit requests, he says, “and I can’t say how many we’ve put in that they made happen.”
Another highlight was the “robust” implementation system PressWise offered, which made it feasible for WSU’s team to integrate the new system by itself.

“We decided we would give it a shot, and we got about 75% of the way without too much trouble,” Sala notes. “But there are always going to be bumps in the road — we just jumped over them and kept going.”

Getting the Vocabulary Right

One of those challenges was vocabulary; modifications needed to be made to the terminology used by his team. For example, before Presswise, the team called a project a “job,” but in PressWise it is called a “sales order,” and “jobs,” which are components that make up a sales order, contain “tasks.” It was somewhat confusing at first, Sala admits, but once everyone was using the correct terminology things smoothed out considerably.

“This may seem trivial but it’s not,” he says, “especially if you have a crew that has been using the same vocabulary for over 30 years.”

During implementation, Sala says, the in-plant ran both its old system and PressWise simultaneously, allowing the team to catch most problems and implement fixes along the way. Then, at the two-month mark, Sala says, they “ripped the Band-Aid off.”

That said, he also points out that WSU didn’t offer public access to the system’s Web storefront for about eight months after implementation, focusing on using it internally and getting staff used to the new system.

“And then in summer 2021, we went ahead and opened a storefront for a few clients that we knew were tech-savvy,” he says, “and they were good clients who respond quickly and know a lot about the printing industry.”

That step allowed the team to work out any kinks on the client side of the software. Then, in September of 2021, the university refreshed its branding, introducing a new logo and color pallet. Suddenly, customers were ordering business cards, envelopes, stationery, and more with the new branding.

“That was probably one of our biggest milestones,” Sala says. “We made it available so people could order for themselves, and that freed up a lot of project management time. With the previous system, someone would have had to touch every one of those orders; now we don’t see the order until it’s released to production. And someday, we will be able to pass it through and not touch it at all, although we’re not quite there yet.”

A Number of Improvements

There was no “eureka moment,” he notes, but Sala has seen a number of improvements, including the ability to easily kit jobs together, as well as quickly reprint old jobs. He is also pleased with the internal communication features, which allow the team to communicate with customers directly from the system, keeping those messages together with the job itself for fast reference.

“That really changed the amount of emails we have to keep track of outside of PressWise,” he says. “It’s all stacked at the bottom of the sales order — you don’t have to go back to email to figure out the last thing you did for a project.

“All in all,” Sala says, “we lost all those people, and didn’t have to replace them. It was a combination of redistributing some responsibilities, and then PressWise filled in the gaps. It really took the part of the production management position, and is really good at letting people know where projects are, and what the next steps are. People can look at the job queues to see what the day will look like, and it also facilitates a lot of the direct mail projects we do. So, it has saved us a great deal of money.” 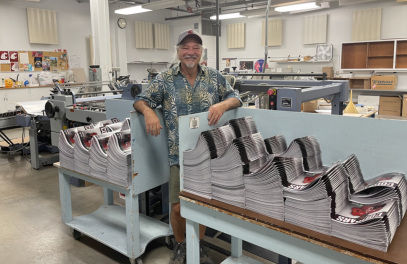 Nick Borsella finishes up the WSU Football programs the day before the game. Presswise’s ability to manage projects with multiple files and tasks coming from a variety of sources both inside and outside of WSU makes it an ideal software solution for the variety of projects WSU Design and Print Services works on every day.

Speaking of money, Sala notes that the fees are “very reasonable,” with the in-plant paying for 12 “seats” (concurrent licenses) for about 20 employees that use it. They started off with 10, and later added two more, but he sees that as being a good balance for now.

“We do run into the occasional message of ‘no seats left,’” he explains, “but then someone puts a note out that they need a seat, and someone else just jumps off.”

When it comes to choosing the right MIS system, for Sala there were a few requirements that he knew his operation would need to prioritize. First, he notes, it had to be browser based.

“We did this journey during the pandemic, so people had to be able to work from home,” he notes. “If it was a desktop app, we couldn’t have pulled it off.”

Second, he says, “it had to accommodate our workflow from project devel­opment clear through the mailing or delivery.” As part of that, he was looking for an option that had built-in features to allow the shop to impose the projects directly in the system itself, rather than juggle a separate system to get the files ready to go on press.

It also had to have a robust reporting system, with the ability to generate and track custom reports on the status of everything from the equipment to the types of jobs being run.

And finally, he notes that a storefront was another critical feature he and the team looked for.
“There are some in-plants out there that don’t need one, but we needed it for both our internal and external customers,” he says.

As for the future, one thing Sala is considering is tying PressWise into the billing system. At the time it was implemented, the in-plant was also rolling out a new internal accounting system, so while PressWise can interface with that side of the business, the work has not been done yet to get them talking to each other.
“We will interface those together eventually, so billing will go directly from PressWise into that accounting system,” Sala says. “And when that happens, we’ll pretty much be right where we need to be.”