How one in-plant planted a seed for wide-format dreams three years ago and watched it blossom into a flourishing revenue stream.

Blue Valley School District Printing Services in the Kansas City Metro area recently ramped up its wide-format offerings even though its wide-format printer — an HP Latex 310 — has been up and running for three years. It was all part of the in-plant’s strategic, conservative growth plan, which has paid off big in the long run and continues to grow at a steady rate.

The decision to purchase the 54˝ latex workhorse was instigated by demand from the Overland Park, Kan., district’s schools and buildings. They were paying inflated retail pricing to companies like Staples because Printing Services did not have the machinery to support their wide-format printing needs.

“Obviously, in a school environment, there’s a lot of potential there for doing things like banners and posters,” explains Paul Ackerman, printing and logistics services coordinator. “As we went through the conversation, we talked more about things that we could expand into, other than simple banners and posters.”

The biggest challenge the eight-employee in-plant faced was creating more wide-format projects without any additional manpower. The school’s administration did not give the shop the O.K. to hire any new staff members to operate the wide-format part of the business.

“They were supportive of us using some capital dollars ... but we couldn’t add people,” says Jason Gillam, director of business operations. “We had to look at our core operations in printing and figure out ‘how do we get more efficient?’ and that’s been what a lot of our focus has been on — the automation that we’ve built into our print shop.” This investment in automation freed up labor so that the team could focus staff on the value-added services and wide-format startup. 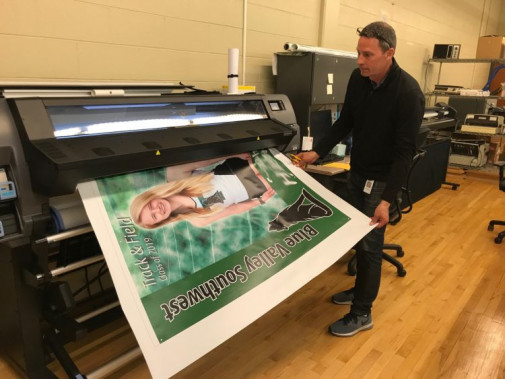 One precaution the team put into place was limiting the types of products it offered right off the bat. “We did that to hold back the tidal wave,” Gillam explains. “We really didn’t do a massive marketing campaign of ‘here’s what we can do’ because we knew it would come at us fast once word got out.”

So the in-plant subtly put its new offerings on its ordering screen and did a few projects to start. Eventually, the wide-format side of the business grew through word of mouth, colleague to colleague.

“This was nice because it allowed us an on-ramp versus a tidal wave,” Gillam says.

Once Printing Services had two years of wide-format success under its belt, a new machine was acquired: a Graphtec 8600 vinyl cutter. This finishing equipment will cut up to a 64˝ sheet of vinyl. Even though the in-plant can only print up to 54˝, the school district planned ahead for the future of the shop and went big with the wider model. With these new cutting capabilities, the shop has really amped up its game. Now, the in-plant can handle additional products that it has started to layer on as the staff has become more comfortable with this type of work.

Printing Services provides clients with an instruction sheet, giving them what Gillam calls a “tickler” on what the shop can do and setting expectations. One concern with offering new services, he notes, is that everyone thinks of the shop as super-fast because it does offer next-day service on 70% of its workload.

“This stuff is different,” Gillam says. “We don’t advertise [wide-format] as next-day deliveries. We had to really differentiate that to make sure that they wouldn’t become upset with us if the work’s not going that fast.” 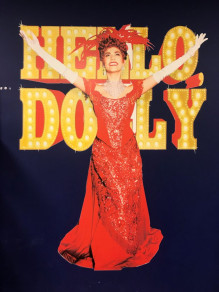 When the in-plant team sat down to discuss which types of projects they could, and should, roll out, they quickly realized that, due to the heavy labor involved and staff restraints, wide-format printing and mounting wasn’t going to be their niche market. The in-plant was already printing play programs and some play posters for its performing arts departments, and after some research, a light switch turned on: backlit frames. Ackerman found fairly inexpensive LED backlit frames, procured a handful to start and created stunning play posters with backlit film. The beauty of it is the performing arts department can easily switch out the posters seasonally. They come back to the in-plant when they need a new poster printed and install it themselves.

“It’s very easy for them to change out but the nice thing is, when you have a big open hallway with this frame on the wall, and it’s lit from the back and showing through, it really makes the play poster pop,” says Gillam. “It draws attention and attraction. We’ve sold several of them, and I imagine that we’ll probably still sell more, as more and more people are exposed to them. It’s nice for us in that it creates some repetitive business.” The district now has 11 schools that have installed the frames, and they regularly use them for their school productions.

The frames have been a great success, however, over the past two years, the product that has had the most demand is wallpaper made with temporary vinyl adhesive (Rad Grafix vinyl, 6 mil). The district has done a few projects of this nature, and when people see them, they come up with ideas to utilize the same product in other ways. It’s really starting to roll now, Ackerman says. 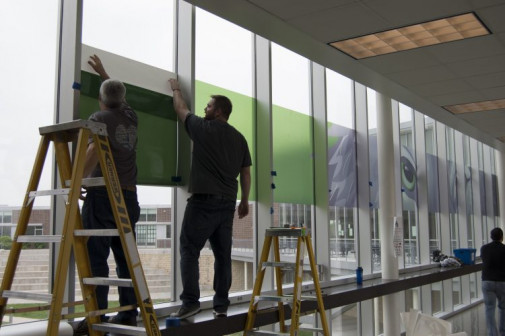 “Our buildings are starting to look at their interior spaces and saying ‘Gosh, how do we change the industrial, block-wall feel of some of our hallways?’” So they’re coming up with ideas to create a strip down a long hallway that’s four-feet tall and run it 20 feet, 30 feet, 50 feet down a hallway. Then they can add images of kids marching in the band, performing in different sports or things like that — bringing a little more character and life to a space that could feel cold.”

The shop is in the middle of producing a 4-foot tall, 460-foot long mural that spans both sides of a high school interior hallway.

“It’s an enormous project for us — definitely the biggest thing we’ve ever attempted,” comments Ackerman.

“We’ve done a couple smaller ones prior to this on the sheetrock, so this is our first foray into block wall, which is going well,” adds Gillam. “There have been some different nuances we had to learn on the install to make it work well. But as an in-plant, we’re thinking, ‘Gosh, we have nearly five million square feet of indoor space.’ The canvas that’s out there, I mean, it’s scary in some ways to think about, but it’s also an opportunity.”

The massive undertaking is on track to be completed by the end of the school year.

Samples of wall graphics printed by the in-plant.

The shop hired an outside graphic artist to help with the design of the wallpaper since it does not provide design services in-house. The same company actually provided a quote to produce and apply the wallpaper: about $24,000. The in-plant, however, will save the district thousands of dollars over that price, Gillam says, as it will cost one-eighth to one-tenth of that quote to produce the project in-house.

“The difference is, we had to tell the building that the outside company would probably get it in a week,” explains Gillam. “We’re going to need a couple months because we’re going to use it as a fill job. As we have teams that have free time, we’re sending people up there but we’re going to save you more than $20,000 dollars. You know what they said? ‘When can you start?’”

To handle installations of wall and window graphics, the in-plant had to train members of its staff.

“We kind of had to create an installation crew from scratch,” remarks Ackerman. “Basically there’s a couple folks from the printing department as well as a couple folks from our warehouse.” Ackerman also manages the warehouse, which is part of the separate Receiving and Distribution Department.

Other uses for the new Graphtec cutter are large, precision-cut graphics for the performing arts department or athletics, and product decals. The shop recently finished an order for 5x5˝ custom-cut decals with a sponsor’s logo that were placed on the handle of foam “lightsabers” for a fundraiser called “Night of Lights.”

When it comes to the future of Blue Valley’s in-plant, the team is looking to obtain a flatbed or hybrid printer in the near future, but is taking its time and embracing its slow and steady approach to expansion of services.

“We’re still a couple of years out on that,” explains Gillam. “We are in the beginning stages of exploring options.”

“Clean air, clean minds,” they say. Deciding to go with a latex wide-format printer was a purposeful decision for Blue Valley School District Printing Services after much research on all the different types of ink and environmental concerns with some of them.

“We settled on latex because there was no environmental impact, whether it be in the shop as far as production goes or having to sink cost into external ventilation,” notes Paul Ackerman, printing and logistics services coordinator. “In the school district, we’re very, very careful about our indoor air quality, right down to what kind of paint we buy to paint the walls and what kind of chemicals we use to clean the building. This is just another example. We wanted to support that mission of the district of preserving indoor air quality.”