Illinois Wesleyan University Publications, Printing and Mailing Services has proven its worth to the university and has been rewarded with an investment in new equipment and a remodeling of its shop.

First came a Ricoh Pro C7110 digital color printer with a fifth station for clear and white toner. At the same time, a new Ricoh Pro 8110s black-and-white printer with an in-line punch was installed. Then the nine-employee in-plant added a Glunz & Jensen PlateWriter 2000. Finally, in October, a four-color Ryobi 3304HA press made its way into the Bloomington, Illinois, shop—its first four-color press. 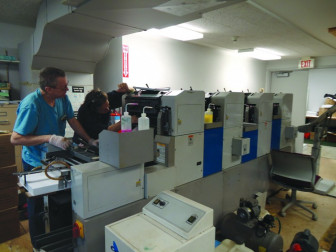 “The university has really made a nice investment in the shop,” declares Director Susan Sombeck. “Having the administration rooting for us has been big.” This includes former university president Richard F. Wilson, whom Sombeck credits with being instrumental in pushing to upgrade the in-plant’s equipment. Wilson retired in 2015.

This is not to say the in-plant was just handed a blank check to spend freely. Sombeck went through a very lengthy and involved cost-justification process.

“We knew, and have proved to the university several times over in the past few years, that it was worth the investment,” she says, noting that university finance department personnel spent a long time learning the in-plant’s business and taking a very extensive look into the shop’s procedures, software and billing systems.

Illinois Wesleyan University is an independent, residential, liberal arts university located about 135 miles southwest of Chicago. Founded in 1850, it sits on an 85-acre campus and had a fall 2015 enrollment of 1,842 students.

The in-plant added the Ricoh Pro C7110 to help handle a steady flow of course packs, stationery and marketing materials, replacing two older copiers. The machine came with a Plockmatic 500 square-fold booklet maker and three-sided trimmer, as well as a fifth station for printing clear and white toner

Sombeck was attracted to the color quality of the C7110 and the fact that it had a small footprint. This allowed the 1,144-square-foot in-plant to save valuable floor space.

“The clear coat and the white toner will allow us to better match our school colors of green and gold,” Sombeck contends. “It also has better imposing and variable data capabilities than our previous equipment.

You can impose a two-sided variable data document and save a template particular to the type of job it is, and then all you have to do is select that template going forward and it does the work for you.”

So far she is pleased with the performance of the C7110.

The new production machine has been a welcome addition to the in-plant, but has also created its own challenges. The shop is currently without one of its experienced press operators, who has been out on long-term disability since April.

“It has been challenging because not only do we have all this new equipment, but we only have one pressman,” Sombeck confides. “The Ricoh equipment has been an easy transition but there has been a lot to learn.”

Sombeck also lauds the Plockmatic 500, which can be used either in-line or offline for digital or offset jobs. The in-plant’s former Plockmatic could only produce a face trim. Sombeck visited a showroom in Chicago to test the Plockmatic before making the purchase and looked at numerous samples. She liked the time savings the machine brought to the table and says her employees have found it very easy to use.

“It scores and square-folds, so it produces a look similar to a perfect bound book,” Sombeck says. “That really solved some issues for us.”

In adding the used four-color Ryobi 3304HA press, the in-plant retired a one-color Ryobi press that had been at the shop for more than 30 years and was used for printing envelopes. The shop was previously producing four-color offset work on its two-color Ryobi 3304HA, doing two passes. Sombeck finds that offset is still the most economical way to go for longer-run jobs. Runs of more than 2,500, she says, are usually produced on the Ryobi presses.

To make plates for the new press, the in-plant added a Glunz & Jensen PlateWriter 2000, replacing an old imagesetter. This became necessary after the shop’s designers upgraded their computers, rendering its 15-year-old imagesetter obsolete.

To make room for the new equipment, the in-plant needed to do some remodeling. It knocked down walls in the kitchen and prepress areas to open up more space. The shop also plans to put down a new rubber floor in the near future.

Sombeck is confident the new equipment will bring benefits and savings to the university.

“We knew we could justify it and that bringing in more jobs would pay off the new equipment,” Sombeck proudly reports. “We also showed that we could cut our makeready time and prep time down 50-60 percent with the new equipment.”

A good example of the shop quickly getting a return on its investment was the addition of a 42˝ HP DesignJet Z5200 inkjet wide-format printer about a year and a half ago. Prior to the HP purchase, all wide-format work was outsourced.

The in-plant is now able to produce banners, backdrops, posters and signs for university events. Sombeck notes that the wide-format printer was paid off in just four months.

“Our goal is to keep things in-house and keep the university’s money here,” Sombeck stresses.

One popular wide-format job at many university in-plants are “big heads”—oversized printed heads of notable figures that are often held up in the crowd at basketball and football games. Illinois Wesleyan University’s mascot is Tommy Titan, a character similar to the Michigan State Spartan.

“The university wants to sell them at the games,” Sombeck says. “I know that we can be doing more of that type of work, but I want to keep the cost as reasonable as possible.”

The in-plant has just nine employees, but they combine to have a whopping 241 years of service at the shop.

“I have the best staff,” Sombeck raves. “They really care about their jobs, and we work great together.”

The shop also employs four part-time student workers, who help out by answering phones and taking on walk-in packaging, mailing and copying jobs. They also handle some bindery and wide-format work.

The in-plant insources some jobs from local schools and nonprofits and will produce work for university employees and students. Sombeck hopes to attract more outside work with the new equipment.

“But we do not compete with local printers,” Sombeck hastens. “The university work comes first.”

Sombeck concludes that she is thankful for the support the in-plant and her employees have received from the university.

“It has been an interesting year, and it has been a challenging year because we have had a lot of changes,” she says. “I don’t know what would have happened if we weren’t able to move forward with this new equipment. They believe in us enough to support us.”

Understanding the Relationship Between Digital Textile Printing and Coatings

First Right of Refusal: Everyone Wants It, Few Attain It
END_OF_DOCUMENT_TOKEN_TO_BE_REPLACED