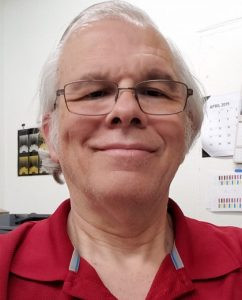 Former Rodda Paint Co. Graphic Services Manager Stephen Denny’s interests extend far beyond the graphic arts industry, ranging from hiking with friends and family to serving as a deacon in the Episcopal Church. While Denny has ambitious goals for life after retirement from his long in-plant career, his first priority is tending to his lawn.

“[My] yard has suffered tremendously,” he laments. “My first goal in retirement is to turn the yard into a nice yard again.”

Denny spent 45 years in the printing industry and 35 years at Rodda Paint Co. Graphic Services, in Portland, Ore. Though he officially retired on Aug. 2, 2019, he plans to return on a part-time basis for a couple more months.

As manager, Denny oversaw the day-to-day operations of the facility, installing new equipment as needed, such as a 25˝ press, bindery equipment, a prepress department and more recently a Konica Minolta digital press. Most notably, though, Denny developed instructions that were printed on product labels explaining how to use Rodda Paint products.

“For me, it was a milestone because I would develop those instructions by talking to people in the know about how to properly use a product,” Denny explains. “Because when I came in, I didn’t know anything about paint. Not only did it help the customers, but it helped our sales force know more about the products.”

Denny’s career began with a curiosity in how things worked. He started to take an interest in mechanics, automotive machining, and welding back in high school. However, when offered an apprenticeship program in heavy diesel mechanics the summer of his senior year, he declined.

“While I like machinery, I like people too, and I hated having literally greasy, oil-stained hands 24/7,” Denny says. “And I just knew it wasn’t for me.”

Denny enrolled in an auto body repair program at Clackamas Community College in Oregon City, Ore., where he began to take an interest in journalism, due to his family’s involvement in the industry.

“My father had a long career in journalism, and then public relations and advertising,” Denny says. “He was auto editor and business editor at the [East] Oregonian in Portland. My brother was a sports editor.”

Upon joining the community college student newspaper, Denny was made sports editor, which, according to him, was due to his brother’s reputation rather than his own. And while he never pursued a professional career in journalism, Denny fondly recalls his time at the paper, partly because it’s where he met his wife, Betty.

“I’m fond of saying that I married my boss,” Denny says. “Sometimes she doesn’t like it, other times it makes her laugh. She was first co-editor, and then editor of the school newspaper.”

Denny and his wife of almost 46 years have two daughters: their oldest is an ER doctor and the youngest a sheriff’s deputy.

Along with meeting his wife, Denny’s time at the paper revealed his fascination with printing presses, motivating him to enroll in the college’s graphic processes program. He took various printing jobs alongside his education, eventually landing a position at Kaiser Heath System in Portland, Ore. operating a small press.

“I really like making equipment run and run well,” Denny says. “When I worked for Kaiser Hospitals, I ran a little two-color machine. It was a Multi 1870. And I literally kept the side covers waxed, [and] had very few service calls for the equipment because I self-maintained, for the most part.”

While the press was supposed to run at 7,000 impressions per hour, Denny says he upped it to 8,400 an hour, focusing on maintaining the equipment’s quality and efficiency.

“If you treat a piece of equipment well, and do the work that needs to be done, it’s very satisfying to be successful at,” Denny says. “And I also enjoyed the challenge of learning about chemistry, and how to print well, not just do the job.”

Denny explains that he wouldn’t have been as interested in the technical aspect of print if it weren’t for the mechanical aptitude he honed back in high school.

“My mechanical aptitude really brought me into graphic arts,” Denny says. “Over time, instead of specifying type and layout and coming up with ideas, I had this computer plugged in in front of me. I took some classes at the University of Oregon extension in Portland and learned how to do it myself.”

In 1984, Denny joined Rodda Paint Co. Graphic Services, where he used his experience producing type on an Apple computer to help the shop grow its capabilities. He added many offerings and services during his time there, most recently installing a Konica Minolta AccurioPress C3080 with IQ-501 Intelligent Quality Optimizer technology.

He attributes most of his success to hard work. “So much of my success was about paying attention to detail, dedicating myself to focusing on the job in front of me, putting in the time necessary to get the work done, and promoting a team environment,” Denny says.

While working at Rodda, Denny got involved with the Episcopal Church, becoming ordained in 1993 as a deacon, a role in which he has served for 26 years.

Along with his service, Denny spent three years volunteering in hospitals as a hospital chaplain. While his time there was brief, his work volunteering changed his perspective on his work with the in-plant.

“When you’re dealing with people who are dying or going through family crisis, you see what trauma is, as opposed to that looming deadline in the print shop,” Denny explains. “It adds perspective to deadlines.”

Newly retired, Denny is hoping to open a retreat center for recently diagnosed breast cancer patients. After receiving a cold call from a paper vendor diagnosed with breast cancer, he knew that he wanted to do something to help.

“We need to have a no-cost means of allowing women to get away from their normal day-to-day lives. There are many, many support groups out there for women, but this would be ... a place to be for a time away, probably very close to the Portland metropolitan area,” says Denny.

“My next adventure, in a group of family and friends, will be in September,” Denny says. “We’ll hike up to about 8,500 ft. on Mount Hood and spend the night stargazing. What you see up that high and away from the light pollution is just amazing.”