If you want to reduce touchpoints, eliminate errors, and take on more jobs without adding stress, a Web-to-print system is your ticket to greater efficiency.

If your in-plant is still making due with emails, spreadsheets, and FTP uploads, you could be making life harder for yourself than it needs to be. Today’s Web-to-print systems allow in-plant operations to manage a file from the initial customer request, all the way through production and delivery — reducing touchpoints, eliminating errors, and making operations far more efficient — especially those that run large amounts of work with a small staff.

We talked with two in-plants that upgraded from manual processes — one has been running Web-to-print software for 10 years now, while the other started more recently — about what drove them to make the switch, how it has changed the way the in-plant operates, and what advice they would give to others considering the same path.

Located about an hour north of Milwaukee, the Sheboygan Area School District installed Rochester Software Associates’ WebCRD solution 10 years ago. At the time, notes Ryan Glaeser, supervisor of Printing & Graphic Services, the four-employee in-plant was consolidating several smaller facilities across the district into one central hub. That meant a significant increase in volumes, so Glaeser knew he would need to automate parts of the process.

At Sheboygan Area School District Printing & Graphic Services, Vicki Crowns prepares a job order. The in-plant handles numerous small jobs from teachers across the district on its fleet of four Xerox D110s. Its Rochester Software Associates’ WebCRD system has proven invaluable in helping the shop process them all.

“Before [WebCRD], it was all paper requisitions, and hand-written hardcopy orders that would come in daily,” he recalls. “Just sorting them out took a big chunk of the day, and then manually handling them all was another chunk of the day. And then tracking it all for billing was an even bigger chunk of the month. It was evident if we didn’t do some sort of automation, we weren’t going to make it.”

On the other hand, California Baptist University, in Riverside, California, only made the switch to Web-to-print about a year ago when its four-employee in-plant implemented Market Direct Storefront from EFI in February 2021. The shop upgraded from a home-grown system that Matthew Lawson, director of Print and Mail Services, says wasn’t providing all the features the in-plant needed.

“It was upgraded over intervals, but it was still confusing for the end-user, and wasn’t as customizable,” he says. 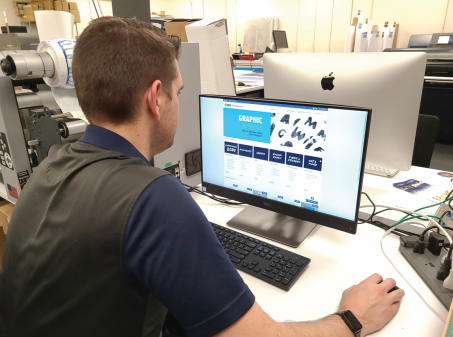 At California Baptist University Print and Copy Services, Matthew Lawson schedules the week’s orders on the shop’s EFI Market Direct Storefront system. Because it is designed like a retail website, the in-plant’s customers feel more comfortable using it, he says, and sometimes even find products they didn’t know were available.

For both in-plants, the ability to customize was a major selling point for the solutions they chose. Both managers stressed that this makes a major difference in helping users adapt to the new way of ordering print products.

Lawson adds that having a site that is designed like a retail website, which users are already familiar with, made them far more comfortable in exploring and poking around.

“People are curious and like playing around and looking for things,” he says. “We had a lot of them who found products they didn’t know were available. We were able to add photos of all the products, which our past system didn’t have, so that made it easy to streamline things — people have a clear understanding of what they’re going to get.”

Another customization feature that Lawson says has made a world of difference for end users has been a search feature, which easily allows them to find what they’re looking for. Search terms are customizable, making it easy for the shop to ensure that the actual terminology matches what users are looking for, rather than trying to force them to learn a new print language.

“A lot comes down to connotations with words,” he notes. “One would call it a tri-fold, another a brochure. We can put in keywords that come up and help make sure everyone is speaking the same language.”

Glaeser has found the same problem: teaching people to use the right words to find what they’re looking for can be tricky, so having a system that allows the in-plant to add descriptions or keywords to help guide them makes a huge difference in ensuring everyone gets exactly what they are looking for. To that end, he notes, a Web-to-print system also makes sure that it is the customer — not someone in the shop — who is inputting the specs for the job, reducing the chance of errors significantly.

“When we did hand requisitions, the interpretation of the file was all down to the hands of the operators,” Glaeser notes. “So that led to a lot of mistakes, a lot of re-runs, and a lot of ‘that’s not what I asked for.’ We’ve shifted all that to the user, so they are now the ones providing all the specs for the job.”

Glaeser teaches them how to do that with a series of training modules and mentorships, but he notes that new teachers coming on board don’t tend to need a lot of help; the system is intuitive enough that it can walk them through the order process easily.

“Now they can order jobs without us needing to worry about the print specs. We rely on what they order, and that’s what gets run, which has reduced the touchpoints and errors, and we have virtually no waste anymore.”

In-plants that don’t yet have a Web-to-print system should take a hard look at their volumes, Glaeser advises.

“If you’ve got a certain volume that is consistent, and you don’t expect it to grow, with lots of long runs, then [Web-to-print] might be overkill,” he says. “But if you’re getting lots and lots of smaller jobs, and you have projected growth on your volumes, then you can really grow into a system like this, which is what we did.”

His in-plant gets numerous small jobs from teachers across the district, so having the ability to run them in batches with software automating the process makes a massive difference.

“It is literally the hub of our operation,” he continues. 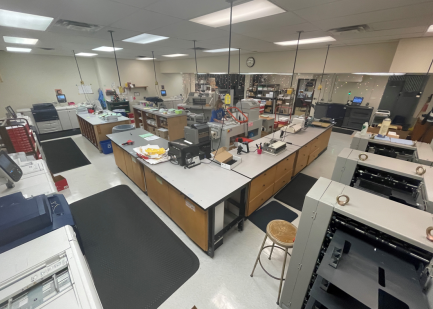 One thing Lawson believes shops should consider isn’t just how jobs are managed, but how a Web-to-print system changes the way the shop interacts with end-users.

“It helps relieve the pressure,” he says. “Even now, looking at my own emails, I know how quickly stuff falls below the red line. Knowing I don’t have to worry about that [relieves the stress.] You can have an auto-responder, but that doesn’t mean it went to the right person, or that the team is working on it.”

It creates a sense of shared expectations, he adds.

“Knowing the end user has the same expectations as the shop just means we can actually meet them,” he says.

Another point that Lawson notes in-plants should keep in mind is that a Web-to-print system lends an air of professionalism to the print shop, which can go a long way toward making the rest of the organization trust it with their jobs. His own in-plant is relatively new to the university, having only been in operation for five years.

With that in mind, what features should in-plants think about when it comes to choosing the right system?

Lawson points out that user management is a key point to consider: how are end users going to interact with the system, and how will the software manage it?

“I favor a Single Sign-on (SSO), since then you don’t have to worry about password management, which can tie down resources. And if they have problems logging in, then they won’t use it. Make sure they can get in and get out,” he says. “That’s really key, and not something you think of right off the bat.”

Glaeser takes that a step further, noting that choosing a system that doesn’t require a lot of on-site IT support can be a big deal.

“My IT guys don’t bother me much about the system at all,” he reports. “We rarely need to get them involved, which is appealing since it doesn’t add another burden to that team.” That said, he notes, making sure the Web-to-print provider has excellent customer service is key to making that work, since the in-plant will be relying on that provider first if anything does go wrong.

Second, he notes that in-plants should make sure the Web-to-print system is “full circle,” managing the job from the time it is created to the time it goes out the door.

“Some people don’t look at it [that way],” he says. “They just use it to collect and sort jobs. But if you can use it to also route the jobs to the machines on a bulk level, it is full circle. If it stops at the [creation], you still have to manually send the files to print” — and that will defeat a large portion of the benefits of automation and the efficiency of having a Web-to-print system in the first place.

Do the Prep Work

Once a decision is made and it is time to install it, make sure the in-plant is ready to go. “We weren’t prepared with the data,” says Lawson. He notes that it wasn’t just needing to have a price list ready to go, but needing to have a list of every paper type, every SKU the shop keeps in inventory, etc.

“We realized just how much prep work needs to go into it,” he says, and if the operation isn’t prepared with that information up front, it can slow down the installation and implementation process.

Glaeser points out that it’s not just taking into account different paper stocks, either. He notes that mixed hardware can make a big difference as well, since even two similar machines from different manufacturers have different requirements.

“It’s not one-size-fits-all,” he says. “You have to customize to each one and set up how you want your workflow to go. Even if you put in another like machine, it tends to require some finesse to get it to work the way you want your system configured.” That comes down to differences such as hardware drivers that vary between manufacturers and equipment, as well as considerations such as how each machine processes a job slightly differently; the Web-to-print system needs to take all of that into account to ensure a seamless transition from one stage of production to the next.

A Web-to-print system can make a huge difference, transitioning an in-plant from one that’s just getting by, to one that is thriving and serving as a vital component to its parent organization’s mission. It can streamline orders, improve the user experience, automate the tracking and reporting, and bring a level of efficiency and professionalism to the shop.

Related story: Choosing the Right Web-to-Print System for Your In-plant

Considering investing in a Web-to-print system in the coming year? Here are a few questions to ask the providers you are considering, to help narrow down which one is right for you.

Manager Returns to Alma Mater to Automate its In-plant