Marcie Carr admits she didn’t know much about printing when she took over as director of the Bureau of Publications for the Commonwealth of Pennsylvania in 2011.

“I had never even seen a production printer before I came here,” she admits. “I didn’t know what a stitch was.” 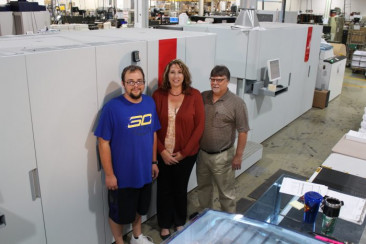 But that hasn’t stopped her and her team from bringing some major improvements to the 65-employee operation, located three miles from the state capitol building in Harrisburg, Pa.

Under Carr’s watch, the Bureau of Publications has consolidated 12 other state printing operations, successfully marketed its services to bring in new agency customers, brought mail presorting in-house, which has saved the state millions of dollars, and overhauled the in-plant’s equipment to add efficiency and allow for staff reallocation to other service areas.

To bring about this last achievement, the in-plant installed a roll-fed production inkjet press in November 2017 — an Océ ColorStream 3900. It replaced three cut-sheet toner devices. Since adding inkjet, the in-plant has been able to add color to what were black-and-white documents with no cost increase, and the operation has been able to bring in new work as agencies see the capabilities of the new press.

The decision to transition to inkjet technology stemmed from Carr’s quest to reduce costs.

“As a government operation, you tend to [ask] what is the most expensive part of your operation? Of course it’s personnel,” explains Carr.

The in-plant wanted to reduce personnel costs or re­allocate personnel into different lines of business while increasing its efficiency.

“Inkjet gave us the speed to do that,” she declares.

It enabled the operation to produce the same quantity of print by leveraging two shifts of print, rather than three.

“We reduced the equipment footprint and gained efficiency,” she says. 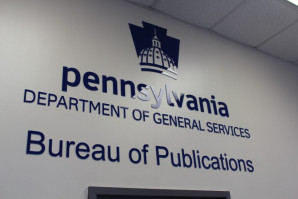 The speed of the inkjet press lets it produce more hourly impressions than the combined volume of all three of the cut-sheet printers it replaced. Also, the reliability of inkjet technology has given the in-plant more overall production time. Uptime is nearly 100%, says Carr.

The bulk of the printing done on the inkjet press is transactional work for the state, such as packets for Health & Human Services, tax documents and other client notices for service agencies. Because of the inkjet press, the in-plant was able to start printing financial forms for a state agency. To get that job, Carr approached that department directly, explained the inkjet press’ capabilities and asked for a chance to do the job. The department was pleased with the results. 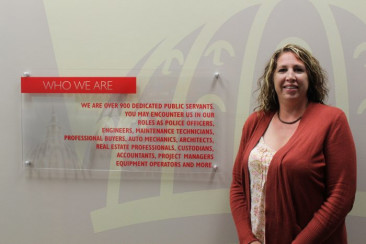 Because the inkjet press can print color less expensively than toner devices, agencies have been able to add color to documents that were previously black-and-white.

“It’s the same cost, essentially, as black-and-white,” she affirms.

Moving to inkjet technology was the culmination of years of effort by Carr to reduce the equipment footprint in the 26,000-sq.-ft. production facility, which provides design, printing, mailing, presorting and wide-format printing for the state. When she arrived in Oct. 2011, the in-plant had several multi-color offset presses, plus a bevy of black-and-white and color digital printers. Two years later offset was gone.

“That was one of the first things we did,” Carr notes.

Carr also worked with the Bureau of Procurement to maintain a careful watch over all print contracts. Now, the Bureau of Publications prepares the job specifications and handles the bidding process associated with a multiple-award contract.

Another successful initiative has been cross-agency collaboration. According to Carr, in 2011, the state had 17 different printing operations. Each was paying a different click charge, and there was a lot of duplication of services. Carr worked with each of them to show them the cost savings that could be achieved by combining equipment and personnel. Today the state has only four printing operations.

“We consolidated all the equipment on one P.O.,” she says. 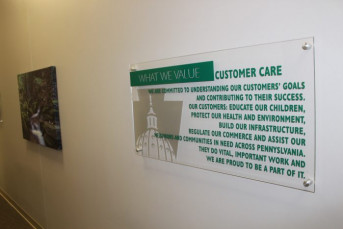 Signage in the hallways of the bureau.

By centralizing, real estate and personnel costs have been reduced and turnaround times have improved.

To bring more print work in-house, Carr visited agencies personally to tout the in-plant’s capabilities and sometimes offered to print a job at no cost to the customer to demonstrate what the in-plant could do.

“The biggest thing is to build the customer relationship,” notes David McCloskey, Graphic Service Center Manager. “Showing them that we can do the job, we can do it as well as anybody else, if not better, and we can do it cost effectively.”

Though there is a state directive requiring agencies to send work to the Bureau of Publications, Carr would prefer not to force agencies to use her operation; she wants to earn their business.

“I wanted them to want to use us,” she says.

To make it easier for customers, the in-plant implemented a Web-to-print system called PA Publisher, based on a commercially available software product.

“We literally tried to create an [online] shopping experience,” she says. “We wanted it to be easy.”

Each agency has its own catalog of publications to choose from, with a photo of the publication to make ordering easier. By simplifying the ordering process and giving customers confidence that they will have their orders quickly, she hopes to keep them from warehousing documents and instead transition to a print-on-demand mentality.

Carr has also tried to make it easier for her own staff to offer ideas and not feel like they’re waiting for her direction. She holds regular team meetings where staff are encouraged to bring problems and ideas or even offer criticism without fear.

“We meet with staff regularly and take ideas from staff to try and create efficiencies on the floor, because they’re the ones doing the work,” she says. 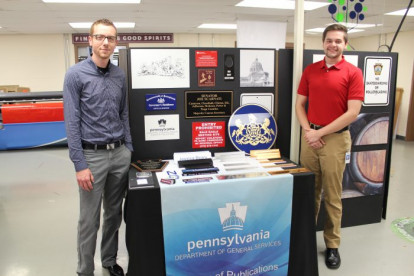 In the sign shop, Ben McAfee (left) and Sean Reynolds show off some of the many items they produce for state agencies.

She cites a recent suggestion by an operator to stop doing a manual count in the presort area.

“We changed the process to implement their ideas, and we probably are going to see a savings of $200,000 a year,” Carr says. “It [gained] them three to four hours of production time a day.”

Carr also encourages staff to celebrate their successes. Cooking Thanksgiving dinner for staff and having pizza parties after finishing a large job are just some of the ways she rewards employees for their hard work.

Adding inkjet is only the latest of Carr’s initiatives to improve the Bureau of Publications. She has plans to enhance the busy sign shop by adding a flatbed wide-format inkjet printer (see sidebar) and add a folder/creaser. Based on the success of the inkjet press, Carr is also eyeing a second inkjet press for the operation. It’s all part of her quest to keep up with technology and increase the in-plant’s efficiency.

“We always try to follow the current trends,” she says.

At the same time, though, she knows that technology is not what will keep customers coming back.

“Our service has to be impeccable,” she says. And she intends to make sure it stays that way.

When Ben McAfee took over as manager of the sign shop at the PA Bureau of Publications, the wide-format printing and engraving operation was not as organized as he would have liked. Using a Fitbit, he tracked his daily mileage as he walked around the sign shop looking for supplies and moving jobs between equipment. He was averaging 3.5 miles a day.

So he took on a major reorganizing project using 5S workplace organization principles to move his tools where he needed them most, move substrates next to the machines that used them and create a logical workflow. He not only cut down his daily mileage to 2.1 miles, but he greatly increased the productivity of the sign shop.

“We have almost tripled revenue in that area and doubled production,” remarks Marcie Carr, director of the Bureau of Publications. “It’s one of our fastest-growing areas.”

The in-plant’s sign shop produces everything from posters, foam board displays and building signage to framed artwork, nameplates and vehicle decals. McAfee even handles installation of these graphics in state buildings. He was able to put an underutilized laser engraver to better use cutting out 3D lettering for the walls of state offices.

“People see these and then they want them for their own office,” he says.

He recently rebranded the halls of the Bureau of Publications with vinyl lettering and graphics and plexiglass signage spelling out General Services’ mission and focus on customer care. The walls are elegantly decorated with gallery wraps, printed in the sign shop, depicting city skylines and scenes from rural Pennsylvania.

The sign shop is currently producing the necessary vinyl and signage for a project involving nearly all state-run liquor stores in Pennsylvania as part of a rebranding effort.

A Path to Change