Supporting the Mission — With Inkjet

When Hemet Unified School District adopted a new math curriculum last year, the southern California district ordered printed materials from the curriculum provider. It arrived on 52 pallets and was distributed to classrooms around the district.

Teachers quickly realized the materials weren’t set up exactly like they wanted. Lessons were in a different order than they would have preferred, and there was no color on any of the graphics. 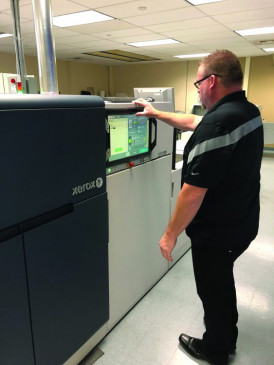 When district officials discussed how to improve the process, Andrew McGuire, director of Purchasing, Warehouse and the Instructional Publication Center, suggested looking into the cost of printing the curriculum in-house, in the district’s Instructional Publication Center. The eight-employee in-plant’s Xerox Color 1000 was doing great work, but adding millions of pages of curriculum material would require more firepower.

After doing an ink coverage analysis with the district’s Xerox dealer, Image Source, McGuire concluded the in-plant could take on this crucial workload by adding two inkjet presses. So last December, the in-plant took delivery of:

This has changed everything at the in-plant, altering the way jobs are processed and greatly increasing its workload. But it has allowed the in-plant to play a crucial role in improving the educational experience by helping teachers do their jobs better.

“It allows us the ability to customize [the curriculum] the way that they want it,” notes Karl Melzer, manager of the Instructional Publication Center.

Some materials are perfect bound, using the shop’s Morgana DigiBook 450 PUR perfect binder. Some are delivered as loose sheets, such as quizzes or worksheets. Other pages are stapled offline.

“We’ve been able to modify based on teacher feedback,” Melzer says.

Best of all, thanks to the inkjet presses, the in-plant can add color to pages inexpensively — a top priority of the district because of how color helps students better retain information.

“It’s been proven that it helps kids learn,” says Melzer.

Adding color with inkjet is extremely cost effective, he testifies.

“The cost is really pretty close to the same [as black-and-white],” he says. As a result, a lot of pages that were formerly printed monochrome are now printed in color. Often, Melzer doesn’t even ask teachers before doing this, he says, because of the low cost.

Producing math curriculum materials in-house has brought the price down significantly compared to what the district was paying the outside vendor — as much as 30-40%, Melzer says. This cost savings, combined with the ability to provide a product so vital to the district’s educational mission, has greatly increased the in-plant’s value.

“It reenforces why we’re here,” says Melzer. “What we do has a direct impact on what the kids are learning. Most of the materials that they’re learning with come from us. It validates our purpose here.”

From Toner to Inkjet

Transitioning from a conventional toner-based in-plant to a high-speed inkjet operation was a big change for the in-plant. Operators were initially nervous, Melzer says, but they’ve adapted well and today the workflow is very smooth. Though the installation took two months (and a Xerox technician remains stationed on-site), Melzer is extremely happy with the performance of the two inkjet presses.

“The Rialto is, by far, the best Xerox production device,” he praises. “It’s so simple.” 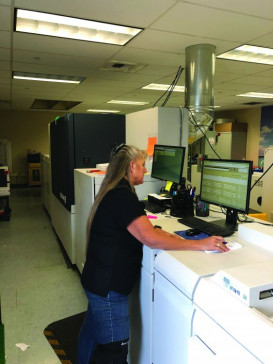 But why did the in-plant see the need to install two inkjet presses, and why both a rollfed and a cut-sheet?

“We really wanted the speed of the Rialto for production, and we really wanted to maintain the cut-sheet for being able to run card stock,” Melzer explains. “Cut-sheet was very important.”

The in-plant prints a lot of coil-bound student planners, so it has a GBC Fusion punch in-line on the Brenva. The Rialto is configured with a perforator and two stackers, so when one fills, the Rialto can keep delivering into the second stacker. Melzer acknowledges that sometimes the Rialto is too fast, and the bindery can’t keep up.

“There was a point when we had to stop production because we had nowhere to put it,” he recalls. “It’s incredible how fast the stuff comes off. The key is making sure someone’s binding all the time.”

In its busiest month the Rialto printed 1.5 million pages, and the Brenva printed 1 million, he says.

Adding paper rolls to the formerly cut-sheet-only operation was a bit of an infrastructure change, Melzer says, but the shop didn’t acquire any roll-handling equipment. Instead, when rolls are delivered, Melzer makes sure they are positioned on end, so operators can roll them up to the Rialto.

When it’s time for a roll change, the press stops with about 2˝ of paper left on the old roll, he says. The operator rolls the new roll into place and splices it on.

“It takes about two minutes to do a roll change,” he proclaims.

This makes for near constant productivity.

“Everybody likes the Rialto because it never stops,” Melzer says. But that requires keeping it loaded with work, which was a change in mindset when the Rialto first went in, he says. Operators had to learn to drop several jobs into the queue at the same time so the press could go from one job right to the next without stopping. Today, the Rialto typically runs for the entire 9.5 hours the in-plant is open each day, printing between 20 and 22 rolls of work each week. One roll will yield around 47,000 8.5x11˝ sheets, he says.

“You have to have the volume,” Melzer reports. “Obviously, that’s the key.”

Though the inkjet presses have had minimal downtime, Melzer stresses that they do require daily cleaning of the rollers and the area around the printheads.

As for deciding which jobs to run on the Rialto and which to put on the Brenva, Melzer says he is still developing those guidelines. Jobs requiring thicker stock will likely go on the Brenva, he says, which can support up to 220 gsm stock. The shop runs 20-lb and 24-lb Boise Polaris on the Brenva and 24-lb Domtar Laser Form roll paper on the Rialto.

Melzer has noticed some differences in the output of the two presses.

“The color is a lot more reliable on the Rialto, in my opinion, than the Brenva,” he says. He notes that the drying systems are different on the presses. The quality of the final product on each, however, is “very good,” he says.

As a result he is slowly moving some work from the Xerox Color 1000 to inkjet by telling customers of the potential cost savings. For some jobs, like newspapers or fliers, inkjet is a better solution. But for graduation programs, brochures and business cards, the higher quality of the Color 1000 makes it a better choice. 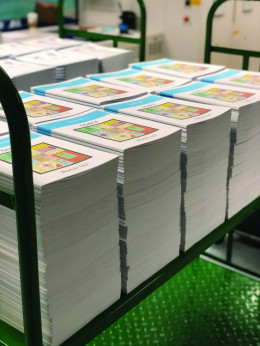 The in-plant also produces yearbooks for Hemet Unified and 21 other school districts, bringing them a major cost savings over what they used to pay. They are printed on the Color 1000 and bound with the Morgana DigiBook 450 PUR binder.

The in-plant has a booming wide-format printing business, Melzer adds. It uses two 64˝ eco-solvent printers, a Mutoh ValueJet 1624 and a 1638, plus a KIP 860 and a Mutoh ValueCut 1800 cutting plotter. The shop produces posters, metal signs, wall stickers and lots of window graphics.

“All these schools want their windows done,” Melzer remarks.

Whether it’s window graphics, yearbooks or curriculum materials, Melzer knows it’s the in-plant’s mission to provide the printed items the district needs, so teachers don’t have to worry and can focus on their core mission of educating students.

“I don’t want teachers standing in front of copier machines,” he says.