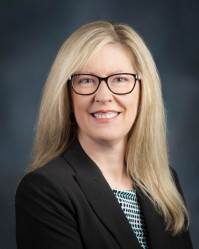 In her 26 years with the State of Michigan’s Department of Technology, Management & Budget (DTMB) Printing Services operation, Kristen Hampton has built a successful, 66-employee in-plant. But according to Hampton, she simply “fell into the job.”

“[After] I had gotten my degree, I ended up getting a temporary job with the state of Michigan in what was, at the time, called Reproduction Services,” she says. “And I’ve been there ever since.”

Hampton received a BA in communications and journalism from Michigan State University (MSU) and intended to pursue a career in marketing and public relations. But after landing a temporary typesetting job at DTMB Printing Services in 1994, she found she had more of an interest in the printing industry.

In the years that followed, she moved through various positions in the organization, such as printing consultant, prepress supervisor, printing specialist, and printing services manager, before finally being named director in 2016.

Ascending to that role in a male-dominated industry was an accomplishment in itself. Though many women face discrimination and bias in the printing industry, Hampton feels fortunate that at DTMB Printing Services, she’s always had a supportive management system, and has never faced discrimination or bias due to her gender. But that hasn’t always been the case.

“In the past, not so much now, I think there was a time where my male counterparts didn’t take what I had to say as seriously as they may have if one of my male co-workers had said the same thing,” she recounts.

Hampton explains that experiences like that gave her a learning curve and that it took time to fully understand her own role, the role of her staff, and how to bridge the gap between. But she encourages women in the industry facing gender bias to stand tall.

“I think women need to recognize that they know what they’re talking about and need to make sure that they are able to voice their opinions,” she encourages. “They need to make people listen and not fall back.”

Under Hampton’s direction, DTMB Printing Services has implemented several significant changes over the past few years, including transitioning the operation to inkjet technology by installing two production inkjet presses: a Ricoh Pro VC40000 continuous-feed press and a Xerox Brenva cut-sheet production press. Another key implementation was file-based printing and inserting, a software and hardware solution from BlueCrest that adds 2D barcodes to allow piece-level tracking throughout the printing and mailing processes, for error-free mailing.

Beyond the technology changes, though, Hampton is most proud of her staff.

“We’ve made some staffing changes and organizational changes to run a little bit more efficiently than maybe we have in the past,” she explains. “And I think that in the past three and a half months, I’ve really seen that what makes the operation thrive is the staff behind it.”

The COVID-19 pandemic, she acknowledges, has had an impact on staff morale. She has been working from home since March 16, and has found it challenging to keep her staff motivated. She has daily calls with them to encourage communication.

“Despite COVID-19, many of them are deemed essential,” Hampton says. “They come to work every day and they do it without complaint, and they’re doing it while social distancing, wearing masks, and using hand sanitizer. They step up to the plate every single time that I ask, and I think that’s a true measure of success.”

One of her biggest challenges as director is keeping the operation competitive and making state agencies aware of its services.

“Our business kind of ebbs and flows with the state budget, and it’s a continual challenge to get ourselves out there and have [agencies] see that they’ve got an internal source for that type of work,” Hampton says. “Our biggest challenge really is to remain a part of their selection process.”

Before deciding to pursue a communications and journalism degree, Hampton wanted to be an elementary school teacher.

“I actually started at MSU as an elementary education major and I changed, ironically, because at the time, there was a huge number of teachers in the state and there were no jobs,” she says.

Due to the COVID-19 pandemic, Hampton has had to help teach her nine-year-old son, who is finishing the school year via virtual education.

“I’ve been a third-grade teacher for the past two months,” Hampton chuckles. The experience has given her a different perspective on teachers and teaching.

Outside of work, Hampton is a mother of three and resides where she was born and raised, in Lansing, Mich. She enjoys spending time with her family and is an avid reader. Most recently, she read “Eleanor Oliphant is Completely Fine,” by Gail Honeyman.

Looking toward the future, Hampton is unsure when she’ll be back in her office. She hopes to bring her remote staff back within the next two months, but in the meantime, she continues to plan for what’s next.

“We’re looking to replace our MIS software,” she details. “We’re working on getting some new equipment and we’ve got some new projects in the works. So as people start to come back [and] as the work starts to come back, we’ll have some internal pieces that we’d like to get done. As far as how we move forward from it, we’re still kind of waiting to see when all the rest of state government comes back.”

And while resuming “normal” operations won’t be easy, Hampton says she feels lucky to have fallen into this career.

When it comes to thinking about her own future beyond the in-plant, retirement seems far away.

“I’ve got a good 10 years left,” Hampton says. When the time comes, though, she’s eager to spend more time with her family and travel, specifically to Italy and Australia.

“I’ve always been intrigued by Australia,” Hampton reveals. “It just looks beautiful. And I’ve always wanted to go to Italy because it’s always been one of those places you see in the movies. I’d love to try and see that in person versus through a picture or a movie.”

Many of her travel goals are inspired by her love of reading. According to Hampton, reading about these places and developing an image of what they look like has made the idea of traveling to them more intriguing.

“When you can read about [places], you put in your head what you think they look like,” she says. “I’m always curious if the way I imagined something is the way it actually is. But when [a book] describes rolling hills, I think, ‘Oh, I’d like to go there.’”

But for now, Hampton is content with staying put. She’s been working from home since March, and that time away from the print shop has proven that she’s not ready to stop working.

“I can tell you, based on COVID-19, that I know I’m not ready to retire,” she declares. “I miss seeing everybody every day.”