The 20 Largest In-plants in Government 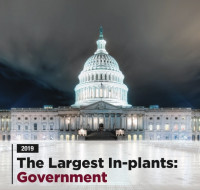 As we prepare to publish our annual ranking of the largest in-plants, we decided to reveal some of the data a little early. Here are the 20 largest government in-plants, ranked by employees and then by sales.

This year's ranking by employees looks similar to our 2018 list, with the Government Publishing Office and the California's Office of State Publishing in the top two spots, followed by the states of Tennessee and Oregon. But after that, a newcomer (Oregon Corrections Enterprises) jumps into the fifth spot, while the State of Missouri moves higher on the list due to some new hires.

On our ranking by annual revenue, impressive sales increases moved the State of Colorado up two spots on the list. The State of Kansas and the City and County of San Francisco also improved their positions in our ranking.

Ranking of the Largest College and University In-plants

Trends and Services in the In-plant Industry (2022)

Print Outlook: What to Expect in the Year Ahead
Comments
Subscribe
Upcoming Webinars
The Print Ecosystem – Input