Technology doesn’t stand still. Despite the human tendency to create an unchanging snapshot of a technology, the incremental forward progress continues. Automation has gone hand-in-hand with printing technology for a very long time and, while the early gains in this area were purely mechanical, many of the more recent gains are among software systems, such as those that drive workflow, or that drive or integrate mechanical systems (platemaking, presses, bindery, and more) into more connected processes.

This article explores recent pressroom developments in automation for sheetfed offset printing to increase productivity, how companies can maximize their automation investment, and barriers to automation success.

According to Kevin Neureuter, director of sales, U.S. and Canada, for Manroland Sheetfed, the main factor driving press automation today is “100% labor issues.” He says the presence of just one press operator on a line is becoming increasingly commonplace, and that press automation is making that possible.

Noting that today’s presses have become “high-tech equipment,” Eric Frank, senior VP of marketing for Koenig & Bauer (US/CA), says they are much easier to operate, and thus do not require a high level of experience or training.

Elaborating on operator skill, Doug Schardt, director of project management at Komori America, notes automation has helped to remove some of the “less-favorable human traits” from production. In essence, he explains, automation can help to eliminate arbitrary preferences and habits that may serve to limit productivity and output quality. 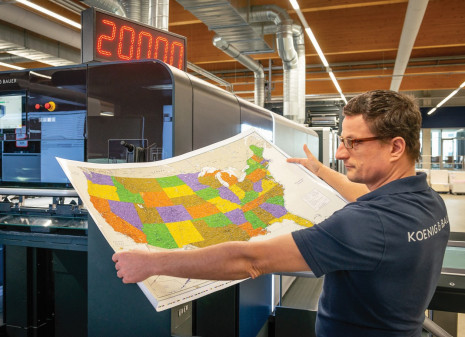 Asked how sheetfed printing press operators can get the best “bang for their buck” in automation, Penge notes that the answer may depend on the applications served: packaging, labels, or commercial. In all cases, however, he says systems possessing automation tools to adjust color and registration during a press run can bring gains across application areas.

Printers should focus on logistics, Frank points out, saying systems for getting plates and paper out of the press can bring great benefit. He stresses the value of job pre-sets that automatically set the press for the next job in line.

Although printers do many short-run jobs, according to Schardt, what they do is quite repetitive. Consistency and efficiency can be gained by harnessing this repetition through press automation.

Hemmen believes in-press camera systems can bring great benefits. He says the use of these systems can significantly reduce the amount of paper used during the press makeready process. That paper, he adds, can then be used for other jobs.

Pointing out that features such as synchronous plate loading can bring great improvements, Neureuter says “self-learning” presses, in particular, can bring quality improvements and time savings. 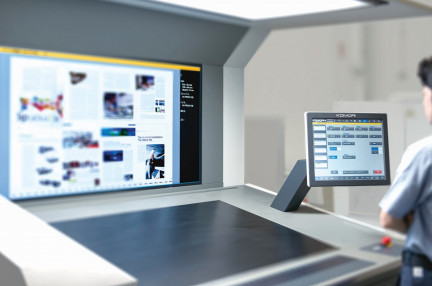 On-press color control that can be monitored from the press console improves and maintains quality, minimizes waste, and boosts productivity.

Automation, well-considered, addresses what is needed to maximize specific processes. Frank believes the unique challenges of the sheetfed space center around the prevalence of shorter runs, which bring the need to shorten the time between jobs.

Another challenge is the variety of materials, Neureuter says, which can range from very thin, to very thick, and can include specialty materials such as synthetics and metallics.

While substrate diversity in sheetfed offset printing is a primary challenge, Penge also believes automation has served to change that challenge into a benefit — more work can be done, at high quality, in a shorter amount of time. 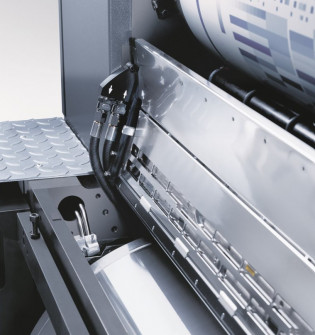 Automation is about efficient movement through the production process, as illustrated by this closeup showing Heidelberg’s Inpress Control system.

Echoing that assertion, Frank says the overall drive to shorter runs has fueled an increase in sheetfed work. To make that drive successful, he says, “you need much more automation to facilitate changes between jobs.”

Saying sheetfed automation is different “because there is more nuance,” than web offset, Schardt believes addressing it thoughtfully requires a refined level of automation “because there are more touch points” in the process.

Despite great gains in automation, Hemmen says, “the skillset needs to be there — there’s no ‘easy button’ like on a digital press.” He says knowledge of ink/water balance, coatings, and paper are still essential. Regarding the technical adeptness of press operators, Hemmen implies that generational factors may come into play, quipping, “It’s always easier to work with a press operator with a smart-phone than one with a flip-phone.”

Old habits, the adage says, die hard, and despite the presence — and prevalence — of automation in the sheetfed offset printing space, printers don’t always take advantage of known best practices. Neureuter recommends printers start by first “utilizing all the tools.” He says that while some printers may have a slew of control tools they have paid for at their fingertips, too many are still relying on their eyes instead.

Echoing that assessment, Schardt agrees that companies need to utilize the tools they have. “Some operators prefer to do it their way and may work around things,” he says. From his standpoint, he says, “We can see what companies are leaving on the table,” by not taking advantage of what automation can provide.

Penge says printers need to develop a “smart print shop” that integrates with their specific value chain. Benefits of this approach can include a bottom-line impact and improved speed to market.

Frank, again, speaks to the need for careful logistical management throughout the facility. He says this effort should include staging of paper, skids, plates, and ink.

The OEM representatives interviewed for this article were asked to share what they thought was the most significant innovation development in four key areas of need.

Frank: Automation on-press has reduced labor needs by up to 30%.
Hemmen: With a long perfector press, makeready is reduced from 30 minutes to as little as six.
Neureuter: Improved speed of changeovers and makeready.
Penge: The press handles many previously manual tasks on-press. A single operator can do more.
Schardt: Better use of operator time. They’re monitoring quality instead of making adjustments.

Frank: Press feeding systems have become more flexible, allowing more variety.
Hemmen: LED-UV curing quadruples the number of substrates that can be used.
Neureuter: Substrate presets on-press allow jobs to be set up in advance.
Penge: No need for separate presses for paper or board. One press can handle both.
Schardt: Presets for substrates allow the press to prepare to run them efficiently.

Understanding the Relationship Between Digital Textile Printing and Coatings
END_OF_DOCUMENT_TOKEN_TO_BE_REPLACED