The Man Who Brought Color to Omaha Schools 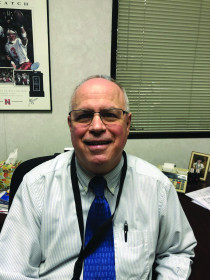 “I was going to the University of Nebraska at Omaha,” he says. “My father needed help, and at the time it seemed like the right thing to do. I thought, ‘I don’t need this college degree. I’m going to go to work.’ I was a Jack-of-all-trades: offset operator, bindery operator, and office worker.”

He also became increasingly active in the printing industry, eventually rising to the position of president of Printing Industries of the Midlands. When Priesman’s father passed away in the late 1970s, Priesman became the owner of Priesman Graphics.

Then laser printers and desktop publishing software hit the scene, siphoning business away from Priesman Graphics. When Priesman had to shut the company down in 1988, he wasn’t surprised, but he was heartbroken.

“Closing the business was very traumatic,” he says. “We were a small business, and most of our employees had been with us for many years.”

Luckily, Priesman was able to find work as a salesman for a local commercial printer he’d known for years. When he learned a year later about an opening at Omaha Public Schools, which has 52,000 students across 80 sites, he applied — and was hired as manager. He was back in a print shop.

Walking into Printing & Publications Services was no shock for Priesman. He’d been a volunteer at Omaha Public schools, was a former PTA president at his kids’ elementary school, and had once even conducted an audit of the in-plant for Printing Industries of the Midlands.

But he did walk into a challenging situation. “There was some unease, because there had been a period of about three months where there had been no manager, and one of the supervisors of vocational education was trying to help run the print shop in the interim,’’ he recalls. “So I had a lot to do. But I came in to an outstanding staff that was welcoming and open to new ideas, and things just took off from there.”

Nothing stays the same in the printing industry, and Printing & Publications Services was no different. Over the years, the in-plant transitioned from phototypesetting to desktop publishing, installed four-color offset equipment, evolved from that to toner-based digital color equipment, and then replaced the offset presses with high-volume production inkjet equipment.

One major change was moving from monochrome to color printing. Priesman started offering what he called “everyday color” from the Xerox Brenva inkjet press, and “prestige color” from the toner-based Xerox Versant. To introduce it to the schools, he printed the same piece in everyday color, prestige color, and black-and-white, then sent samples to the principals and department heads with a memo explaining the difference and the cost.

The upshot? The everyday color and black-and-white were virtually the same price, but there was a significant premium for the prestige color.

The Xerox Versant became a backup system, and the school district happily welcomed the reduced cost and excellent color from the Brenva inkjet press.

Printing & Publications Services is one busy place. The in-plant prints 73,000 handbooks every year, each with 18 to 24 pieces of paper, which takes 470 hours of machine time.

“During some parts of the year, we might average 150 to 175 new
printing orders each day,” says Priesman. “During peak times, that can increase to between 500 and 600 new orders each day.”

To keep track of it all, Printing & Publications Services uses EFI’s Pace MIS, which interfaces well with its EFI Digital StoreFront Web-to-print system. This replaced a home-grown job ordering system the in-plant used for many years.

“We were trying to illustrate common tasks, and I think there’s nothing better than actually seeing the process,” he explains. He used software that records what’s happening on the computer screen to show, for example, how to order the correct size of forms, so customers can get it right the first time.

All these changes have had an impact. Printing & Publications Services received the In-plant Innovator Award from In-plant Impressions in 2017, and has also been honored by local graphic arts awards programs for individual print jobs.

Priesman thinks he may retire in two years’ time, but he’ll always be the man who was born to print — and who brought innovation and color to Omaha Public Schools.