The U.S. capital is buzzing with the race to the Presidency, but for in-plants, it was the second annual Digital Printing in Government and Higher-Ed Conference that caused a stir in Washington, D.C., last month.

The second speaker at DigiGov was, for many, the most fascinating. Michael Wash, associate director and chief technology officer for the Bureau of Engraving and Printing (BEP), discussed the role of U.S. currency nationally and throughout the world. Read more.

The race to the presidential podium has been at the forefront of everyone’s mind. Politically charged events, debates and rallies have created a buzz that is palpable, even among the apolitical. In turn, Washington, D.C., is an exciting place to be right now. But in May, the nation’s capital was an especially compelling place to be for in-plant managers.

In-plant Graphics’ second annual Digital Printing in Government and Higher-Ed Conference — affectionately called DigiGov — was hosted in sight line of Capitol Hill at the impressive Government Publishing Office (GPO). More than 100 attendees from in-plants around the country filled the GPO’s Harding Hall, a vast room with elaborate wall, ceiling and crown molding, reminiscent of an old theater. It’s hard not to get excited in a location that boasts more than 150 years of history. 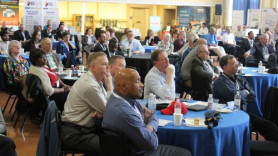 More than 100 government and university in-plant managers from as far away as California attended DigiGov 2016.

“What a great venue and event,” praised Brian Trott, Systems and Mailing Supervisor at the U.S. Senate. “I found the conference to be very informative — not only of the things that we could be doing as an in-plant, but also what we are already doing that others may not be.”

“It was great to be part of DigiGov once again,” enthused Jimmy Vainstein, senior project manager at The World Bank Group’s in-plant. “In-plant Graphics’ effort to get so many government in-plants in one place really paid off. Innovation continues to be the drive for most of us, and the event provided a great platform for our organizations to learn from each other.” 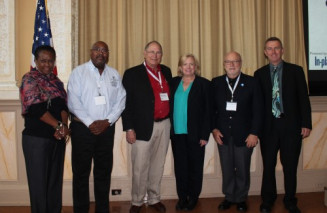 Not only was DigiGov packed with useful information from a range of speakers, it featured a bustling vendor area filled with solutions for the in-plant market from companies such as Canon Solutions America, Muller Martini, Xerox and Ricoh, all top sponsors of DigiGov. Other supporters included BCC Software, EFI, HP, Imprints USA, Infigo Software, Max USA, Neopost, Presstek, Rochester Software Associates and Rolland Enterprises.

A Time of Transformation

After attendees settled in with their muffins and coffee, IPG Editor Bob Neubauer, who emceed the day-long conference, introduced GPO Director Davita Vance-Cooks. Welcoming the room of professionals to the GPO, she told the crowd of attentive listeners that the GPO may be a long-standing institution, but that it’s not immune to the necessity of change in the dynamic printing industry. 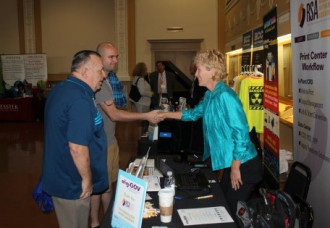 Attendees visit the vendor area during one of the breaks. Fifteen companies displayed their products and services this year.

“The GPO is 155 years old and in the midst of a transformation to a content-centric publishing organization,” she noted. “[We’re] aggressively transforming to meet the demands of the digital world.”

She continued by saying that to be relevant in the digital environment, the GPO must constantly work to change the perception people have of it. Changing its name to the Government Publishing Office was an effort to show that GPO encompasses more than merely ink on paper. Still, she said, the battle to prove GPO’s worth to stakeholders hasn’t been easy. It mirrors the struggle that in-plant managers face to demonstrate the need for their services. 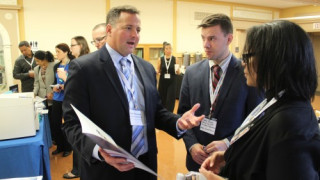 Rob Piersielak of Xerox talks with print managers from the U.S. House of Representatives.

Vance-Cooks revealed that a study conducted by the National Academy of Public Administration (NAPA) to evaluate the effectiveness of the GPO was crucial in helping to ensure the business was competitively positioned within the industry. With a five-year strategic plan — which included a new website, app, embracement of social media and expanded offerings and partnerships with companies such as Google and Apple — the GPO was finally recognized by its stakeholders as a publisher and not simply a “printer.” The GPO even holds the title as the first legislative branch agency to transition to cloud technology. 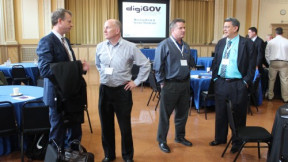 But Vance-Cooks explained that nothing would have been possible without the help of GPO employees. Quarterly town hall meetings and open communication helped to transform the GPO from a historical enterprise to a living, breathing digitally integrated publisher. 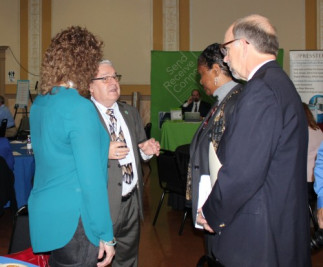 In one panel, two government in-plant managers shared details about their print operations and how they have modernized them. First Damien McInerney, manager of Printing Services at the Commonwealth of Virginia Department of Motor Vehicles, offered tips for overcoming some common in-plant challenges. He urged his peers to stay current on equipment advancements and technology. He stressed the importance of communication and involving staff in solutions. His shop, he said, focuses on “ahead-of-time delivery” to keep customers satisfied. 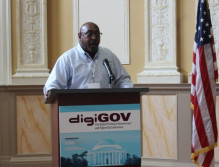 “If someone is still stuck in the offset world, they either need to go into packaging … or move into digital,” he said.

‘The Devil is in the Details’ 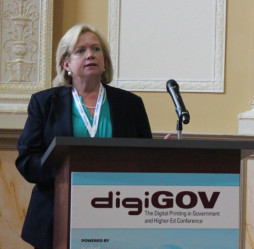 Government printing wasn’t the only focus of the conference, however. Catherine Chambers, director of Print and Mail Services at Alfred State, took to the podium to discuss higher-ed. She highlighted five key best practices:

In her time managing four different higher-ed in-plants, Chambers has learned that “the devil is in the details” when you’re thinking about adding services. So don’t take the high-level view; zoom in. 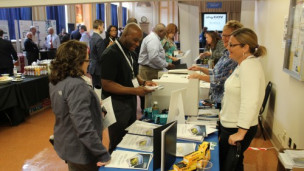 Attendees visit the vendor area during one of the breaks.

“If you’re far away from anything,” she said, “anything can look good. Look at the details and get into the nitty gritty.”

Chambers recalled a time when a customer wanted her worksheets padded, and Chambers suggested shrink-wrapping them instead. But a closer look revealed that the client did not have air conditioning and relied on open windows for air. Padding kept the sheets from blowing around. In this case, shrink-wrapping did not make sense, so the job was padded. 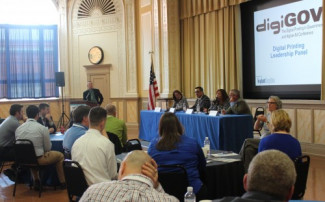 It’s important to look for what is wrong and fix it in order to maintain a successful business. During her time managing Virginia Tech’s in-plant, for example, she said there were two copy centers, one on each side of campus. By consolidating the shops and moving everything under one roof, she brought savings to the university and was able to better manage the printing operation.

Chambers stressed the importance of understanding your institution’s goals and aligning yourself strategically with them. At Alfred State, one goal is to make better use of New York’s state-wide shared services initiative. In an effort to better utilize the internal printing and mailing resources of SUNY institutions, her in-plant uses its Xerox iGen4 to produce work for other SUNY schools. In fact, approximately 40% of her in-plant’s revenue comes from external customers. 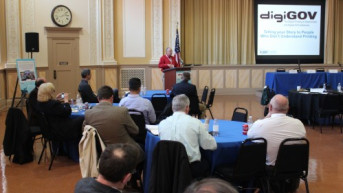 Finally, Chambers closed with a salient point. It’s important to understand the needs of your customers, “Do what people are expecting you to do, not what you think they want,” she advised.

After a panel of top sponsors fielded questions from IPG’s Neubauer on digital printing innovations, Ray Chambers, founder of Chambers Management Group, took the mic to discuss the importance of “telling your story.”

He began by reminding participants that even though most in-plants operate in similar environments, their cost structures may be entirely different, so comparing the prices charged by different in-plants can be a slippery slope. The same operating limitations exist in the commercial sector. In fact, the major print management professional organizations (PIA, NAPL) recommend that their commercial print members not compete on price. Ironically, though, one of the primary arguments used by outsourcing vendors is that they can supposedly reduce costs, a complete non sequitur.

Chambers also pointed out that in-plants are a form of vertical integration, a management model based on an organization’s need to control all facets of the supply chain to operate successfully. Over time, the arguments used to justify establishing the in-plant need to be revisited, he said, if only to remind decision makers that there was a good reason for establishing the shop in the first place. To validate those arguments, he noted, in-plants should measure their performance.

“How can you manage something that you’re not measuring?” he asked.

He offered examples of what should be measured, such as production time, machine utilization, early/late/on-time delivery (including due dates missed) and price comparisons. Also, he said, look for measures that describe the strategic value of print to the organization. University in-plants can link production to the teaching, research and service missions of the university. Government in-plants should link production to their agency’s mission as described in the agency’s charter. 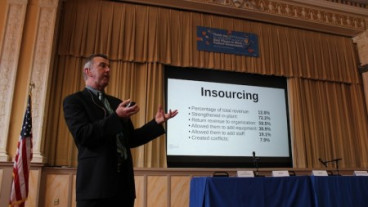 Bob Neubauer presented the results from a major research project on the in-plant industry at the DigiGov 2016 conference.

To close the educational portion of the conference, Neubauer presented the results from a major IPG research project on the in-plant industry. Neubauer compared government and higher-ed in-plants with the rest of the in-plant industry, noting several services that are more popular at university in-plants than in the rest of the industry. For example, 87.5% of higher-ed operations offer variable data printing, compared with 69.9% of the entire in-plant population. Just 64% of government in-plants offer VDP.

Similarly, mailing, online ordering, copier fleet management and selling promotional items are all services provided by significantly more higher-ed in-plants than by the general in-plant industry. One service provided by more government in-plants is graphic design; 84% of them offer this, compared with 75% of higher-ed in-plants and 71.8% overall. 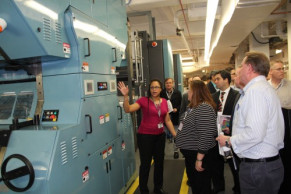 Neubauer cited an increase, compared with 2014 figures, in the production of envelopes, manuals, annual reports, calendars, books, window clings and floor graphics at in-plants. Insourcing, he revealed, is now being done by 63.4% of in-plants, up from 52.7% in 2014.

The day ended with a tour of the GPO’s printing facility. Tour-goers were given a glimpse at the government agency’s impressive capabilities, including the GPO’s new Timson ZMR web press, its case-making and sewing machines and demonstrations of its spine marbling operation.

“The tour of GPO? Truly a great experience,” praised Dwayne Magee, director of Messiah College Press and Postal Services. “History and the future, all happening under one roof. Thank you to my friends at IPG for a day well worth my while.”

Ashley Roberts is the Senior Production Editor of the Printing & Packaging Group.

Data is Critical to Your In-plant’s Survival

No Strategic Plan? Here’s How Your In-plant Can Write One

In-plant ‘Saved by a Pandemic’