The Wild World of Restaurant Graphics

From the menus, to the wall graphics, to the signage, to the windows, and everything in between, graphics help restaurants set the mood and create the ambiance they need for the experience they are trying to evoke. Whether it is a soft, romantic setting or a bright, bold concept, every restaurant has a unique brand image they need to uphold. But restaurant owners are chefs and business people — not graphics experts. A print service provider (PSP) with ideas and expertise to help bring a new concept or vision to life can mean the difference between a new restaurant standing out, or fading into the background.

And it isn’t just new restaurants that benefit from a motivated PSP. To stay fresh and relevant, most restaurant brands seek to refresh their look and feel periodically, and having a partner who can help navigate that path between updated and unrecognizable without missing a beat is another tick in the box for having a strong relationship with the local print shop.

Below are two examples of working with restaurants. In the first, Vegan Junk Food Bar worked with Canon to create a bold new concept with striking contrast for a social media-inspired design that really pops. And in the second, Vomela Companies talks about the challenges and opportunities shops face when approaching restaurant projects, and how they have carved out a profitable niche in this space. Both are great examples of different ways print can be part of a restaurant’s story.

Vegan Junk Food Bar, based in Amsterdam, is a bold colorful brand with food that literally seems to pop off the plate. To help make that food the true star, they worked with Canon Solutions America to create a unique 2D restaurant concept that became as much of a draw for patrons as the delicious items on the menu.

Kris Walewijns, global strategy & new business development manager at Canon Production Printing, notes that the partnership with the restaurant, which has six locations, began with a marketing push for the latest Canon printers.

“We approached a creative agency and gave them the task to create something colorful and cool. It couldn’t be boring — everyone was bored sitting at home, so it needed to be spicy and young. That was the brief. And they came back and said, we have friends in Amsterdam with a restaurant chain.”

Vegan Junk Food Bar’s graphics are bright and bold, and they ultimately agreed to allow Canon to use their imagery in the rollout for the latest UVgel printers. While the marketing push didn’t use the restaurant’s exact photos, they did base the entire campaign around bright and colorful fast food, and the result, Walewijns notes, was that everyone was happy.

“And then, two months later, they came back and said, ‘we did you a favor, now you can return it,’” Walewijns says.

The chain, he points out, wanted to experiment with its graphics a bit, and had an idea for a bold black-and-white design that it hoped would make the colorful food really stand out. “They called it a 2D restaurant, and the idea was a whole background in black-and-white, almost like a cartoon drawing,” Walewijns says.

The result was a truly unique concept, that drew in fans from all over who didn’t just want to taste the food, but wanted to interact with the brand, taking and posting photos on social media platforms around the world.

Part of what makes the concept so striking is that nothing was left out. “Everything up to the toilets is in the theme,” Walewijns says. “From the ceiling to the floors, to the tables and to the fridge, everything is in black-and-white linework without any depth. The effect is ultra-cool.” 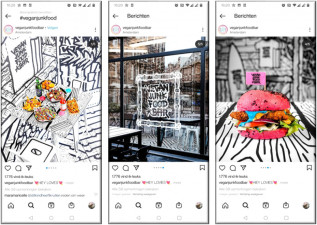 It might seem like simple black-and-white linework would be the work of nothing to create and install, but Walewijns notes that the simplicity is incredibly deceptive. “If you’re just a millimeter off, you notice,” he says.

The Canon Colorado 1650 with UVgel technology was used to print everything for the project, which Walewijns notes was possible because the material doesn’t shrink or expand during printing on the machine because it uses no heat, allowing them to create highly precise graphics that would line up correctly when it came time for the installation.

But the challenge of ensuring an entire restaurant of linework was correctly aligned wasn’t the only obstacle the project had to overcome. Walewijns notes that the entire graphic was printed and prepared by Canon in a day, and then a local company had just a single day to get it all installed.

“They were only prepared to close the restaurant for a single day,” he notes. “It was all installed in just under eight hours. The professional installers came in the morning, and by late afternoon it was all done, and the next day the restaurant was open again.”

Vegan Junk Food Bar had intentionally chosen one of its smallest locations, which is more along the lines of a burger joint, for this test of the new concept, but it’s already planning to roll it out to additional locations after it proved to be incredibly popular with everyone who visits. The next location they are planning to open is in Cologne, Germany, which will have a third of the restaurant dedicated to the new black-and-white graphics, with the rest remaining the bold and colorful graphics the brand is known for.

“The black-and-white attracts a lot of people in, but once they eat the food they want to leave. So, it is great to encourage traffic, but the one opening in Cologne they also want to have a lounge area,” Walewijns says. “Since it lacks any depth of vision, after a few hours you start to get a headache,” he explains, so having a location that takes the best of both concepts and combines them will allow the location to draw in foot traffic, while still being a fun place to hang out for those who want to stay longer.

Since the initial installation in September, Vegan Junk Food Bar has only had to replace the floor graphics, which Walewijns notes is because the graphics weren’t laminated because the inks are very scratch resistant, but being in a restaurant with food and beverages, the white portions got dirty. He notes that he isn’t sure if the replacements were laminated for durability or not, since a local PSP had taken over the account “since we don’t want to be in competition with our customers,” he says.

The result is a very unique restaurant concept that has been so well received it is being carried into more locations as Vegan Junk Food Bar looks to expand. The food truly does seem to jump off the table, giving visitors the feeling they are stepping into a comic book. It is a great example of just how much of an impact graphics can have on a business, and how making bold changes like this can help a brand truly stand out.

When it comes to producing graphics for restaurants, Vomela Companies knows what it takes. With more than 1,300 employees in 18 locations across the United States and Canada, this full-service printing and commercial graphics operation has helped a wide range of restaurants bring their vision to life over the 75 years it has been in business. 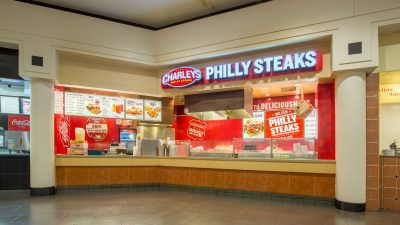 Teri Mascotti, the director of brand marketing for the company, notes that the company specializes “in large-format and specialty printing, which applies to building and vehicle wraps, branded interiors, packaging, POP signage, intelligent mailing, and event graphics.”

Vomela Companies got its start in restaurant graphics in 2008, Mascotti says, with a large global quick serve chain. “Back then, you supplied the same graphics package to all locations. Today, with language versioning and community influences, you see restauranteurs embracing the locale and speaking to the neighborhood around them. It’s no longer a one-size fits all.”

And the applications can vary greatly, as Vomela isn’t just providing a few printed elements, but is helping restaurants create an experience that will have customers wanting to return over and over.

Mascotti notes that one of the more dramatic transformations Vomela Companies was part of was helping Bojangles with promotional elements celebrating college football. “Bojangles Restaurants serve the regional Southeast. In college football, the SEC (South East Conference) also covers much of the same area. To coincide with football tailgating festivities one weekend, they wrapped the entire outside of a restaurant in Charlotte, North Carolina, as one of their ‘Bo Boxes’ (their signature yellow to-go box) promoting new iconic team-themed Big Bo Boxes with return of live sporting events and tailgating (post COVID).”

In fact, she notes, one thing Vomela Companies takes pride in is serving as an extension of the marketing department for customers, offering expertise to help bring unique ideas to life. But great design isn’t the only element necessary for a successful restaurant project, Mascotti says. One of the biggest challenges they regularly face is compliance. “Understanding the rules and regulations of your building and the community [is critical],” she notes. “This could be special signage requirements, city ordinances, building codes, or restrictions in your lease agreement.”

And as Mascotti noted earlier, no two locations have exactly the same signage and graphics needs in today’s world, but at the same time, every location has to have a cohesive branding language to ensure it is instantly recognizable. One of the key pieces of technology Vomela Companies uses to achieve that is called FLEX, which, Mascotti says, “allows multiple location businesses like restaurant chains to release a signage package and let the individual locations order on demand.” She goes on to note, “That said, some of the non-technology aspects are still as important as ever: starting with the site survey or audit before your work begins, your material selection, and your installation team.”

The restaurant business is changing, with the lines blurring as to what makes a space a restaurant, versus other types of businesses. This brings unique challenges, but, Mascotti says, it also brings some opportunities. “We see the lines of restaurant, retail, and public spaces blurring. It is really an exciting time to see financial institutions installing coffee cafes, school cafeterias becoming cool hangout places for kids, grocery stores are inviting consumers to dine in with food selections and beer and wine bars. Gas stations are adding quick serve food platforms. These are all experiential formats that bring consumers back time and time again.”

Restaurant graphics serve to draw customers in, whet their appetite, help drive them to food they will (hopefully) love, and give them a reason to want to return. Cultivating a skill for bringing all of those elements together is something Vomela Companies has excelled at — and will continue to hone and expand as the retail landscape continues to shift and change in the years to come.

Related story: The Creation of a 2D Restaurant with Wide-format Graphics