Being creative and offering customers new solutions are keys to the success of Fresno State Printing Services and have helped the in-plant erase the deficit it once carried.

As an in-plant with just three employees, the $1.3 million Fresno State Printing Services currently bills is already an impressive feat. It’s even more impressive knowing that the operation at one point had a seven-year annual deficit of $300,000.

Its successful upturn is attributed to the in-plant’s commitment to building and maintaining customer trust, diversifying its offerings, and thinking outside the box. Even amid COVID-19, though Fresno State Printing Services’ jobs have decreased, its volume has not. 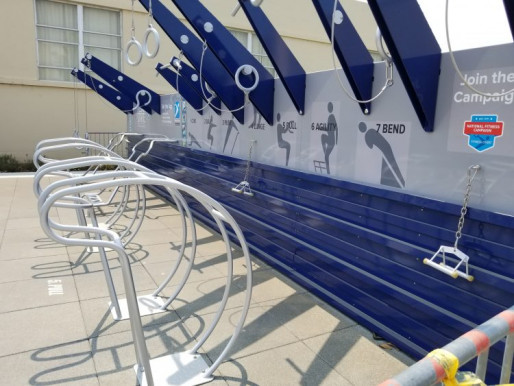 The in-plant printed and installed all the graphics on the outdoor workout facilities on campus.

“I’m doing more than I was at this point last year, and with less people,” reports Support Services Manager Mike Von Dohlen.

Customers at the Forefront

A significant issue when he joined the in-plant during the deficit six years ago, he says, was overpriced jobs that were deterring customers.

“We had to build their trust and lower the pricing to be more competitive in the area,” he says. “Once we did that, we were able to generate some extra end-of-the-year funds, and were in the positive.”

The in-plant started utilizing a work order system, tracking individual equipment per usage to determine where to allocate their reinvestment money. “It started snowballing from there with tracking what we were outsourcing and selling out to other shops, and most of it was large-format,” he says. “We were able to show a savings if we actually purchased the equipment and were able to better control the product doing it in-house.” 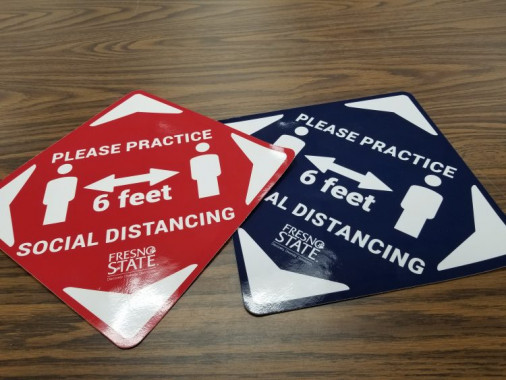 During the pandemic, social distancing signage has kept the in-plant busy.

But no decision, whether acquiring equipment or entering a new market, is a hasty one for Fresno State Printing Services. Von Dohlen says the team familiarized itself with the large-format jobs that were being outsourced in order to build that customer confidence for when those jobs ultimately were brought in-house. Even when purchasing the Summa Class T 140 cutter, the team spent two and a half years learning the equipment and process to lessen the learning curve. Another priority for the in-plant when it comes to equipment purchases and the products they ultimately deliver is color consistency. 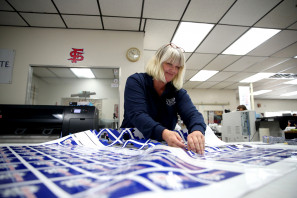 With each investment, Von Dohlen also wants to ensure the equipment aligns with the operation’s goal of being a one-stop shop, for not only the school, but its off-site customers.

“When I look at new equipment for the shop, I look for things versatile in multiple products, and not just one item,” he says, noting that Fresno State Printing Services has three different entities: mailing, printing, and large-format. “We are diversified so that if one item starts slowing down, it doesn’t really affect us.”

This has especially helped the in-plant during COVID-19, as it has switched gears to rely on large-format due to decreasing volumes in letterheads and mailers. 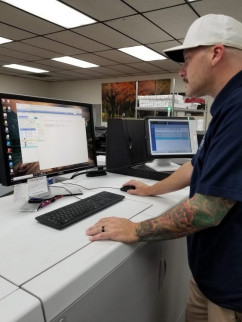 Loren McKenney prints a job on the Canon imagePRESS C10000VP.

As a strictly digital operation, its typical toner jobs for the school include donor letters, event postcards and programs, alumni relations products, magazines, and VDP mail merges. The shop also works with local nonprofits, counties, and school districts. It produces donor letters for churches, in addition to an annual mass program booklet, printed so it can be read in English, and then Spanish when turned upside down. The operation is currently helping other California State University campuses whose in-plants have temporarily shut down.

Naturally, much of its business lately has pivoted to include sneeze guards — which it is also producing for 200 local schools — window graphics, safety break strips, stickers for daily heath screening check-ins, and floor graphics.

From temporary tattoos to personalized hand sanitizer, staying ahead of the curve and trends, and showcasing its capabilities, has been a priority for Fresno State Printing Services. Its outreach efforts have included handing out promotional item “goodie bags” at campus events and vendor fairs.

“If you’re not creative, someone else will be, and then all the sales will go to them because they thought outside the box,” says Von Dohlen. “And by the time you find out, you’re copying them, and it’s too late. It’s about being at the forefront.”

Being on the forefront for the in-plant also means holding an internal and external license for the Fresno State branding logo, which allows it to produce and sell not just for on-campus events and departments, but the bookstore and rest of the campus auxiliaries. This allows the campus to have more consistency with its branding standards both on- and off-site.

Fresno State Printing Services’ handling of all the campus promotional items is just one example of the support the in-plant receives from upper management, to which Von Dohlen also attributes its successful turnaround over the years. 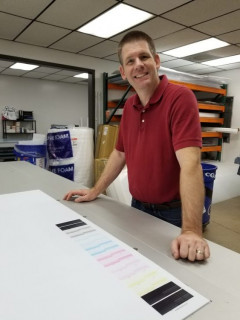 “You have to have that upper management support,” he says. “It’s not only the shop advertising to people in the community — my boss is doing it, and his boss is doing it.”

“A lot of people will call us saying they have a certain problem with something they’ve printed, and we help them find an alternative to fix their issue,” says Von Dohlen. “We’re building trust, so they come directly to us. They don’t get other quotes; we aren’t in that battle. I would hear that in my first two years, and now I don’t hear it at all."

From the Editor: A Wide Future

Looking Back at Mimaki’s Innovation Days