With a can-do attitude and unwavering dedication, the United Federation of Teachers Printing and Mail Department turns out top-quality work—and never misses a deadline.

Oscar Rivera’s dedication to the United Federation of Teachers’ Printing and Mail Department can be summed up in this one comment:

“If someone were to call me—two, three, four in the morning—to come into the office and open up the shop, I would do it in a heartbeat, without any gripes, because this is my profession; this is what I chose to do for a living.”

As production manager of the 20-employee department, Rivera oversees not only print and mail, but receiving, supplies, maintenance, trucking and the entire copier fleet for the United Federation of Teachers (UFT), a union representing more than 200,000 education and healthcare professionals working in New York City’s five boroughs.

When someone asks him for something—even if it’s not his direct responsibility—Rivera makes sure that person gets it.

“My main expression is, ‘no problem,’ ” he remarks. “It’s never a problem. I’ll work it out and I’ll make sure that it gets done.”

These are not empty words. Spend an hour in Rivera’s office inside a lower Manhattan building—a stone’s throw from the New York Stock Exchange—and you’ll quickly see he’s a very busy, very efficient man. His phone rings constantly, and a steady flow of people poke their heads through his door with questions. He helps every one of them, quickly and right to the point, before turning his focus immediately back to you without missing a beat. It’s easy to see why he’s earned the respect of both the UFT and his employees. 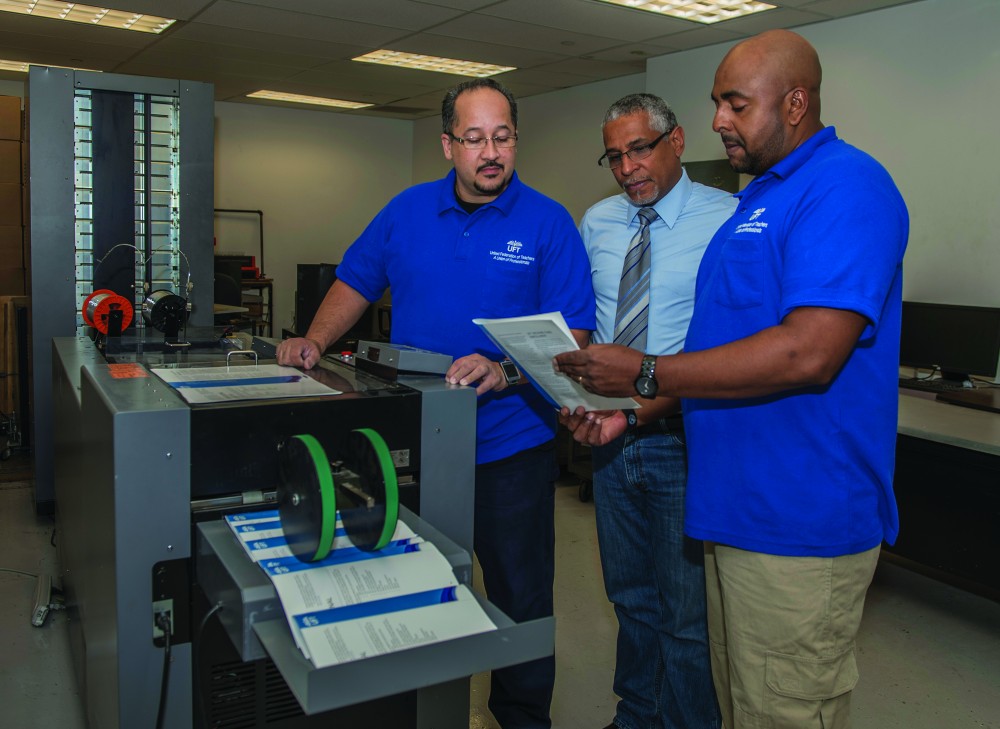 From left: Louis Lopez, Oscar Rivera and Jimmy Molina go over a job being finished on the Duplo System 5000. (Photo by Natasha Cancinos.)

His can-do attitude has also helped bring about a major transformation of the in-plant over the past decade from a low-tech, slower-paced shop to the well-equipped, busy operation it is today. Rivera has focused on expanding the department’s capabilities to better serve UFT members and has made it easier for the organization to work with the in-plant.

A stroll through the Printing and Mail Department reveals an impressive arsenal of equipment: web and sheetfed presses, the latest digital color devices, wide-format printers, plus inserting and addressing equipment. In process are a variety of jobs: letterhead, envelopes, brochures, NCR forms, conference programs, invitations and even perfect bound books.

The occasional rumble of a passing subway just on the other side of the shop’s wall reminds visitors they are in New York, where things move just a little bit faster. In fact, Rivera himself admits he occasionally has trouble keeping up.

“I can’t get from point A to point B fast enough sometimes,” he reveals. He even keeps a scooter in the corner of his office to zoom to the other end of the shop “when it gets really busy.” Often when someone needs his attention, he’ll say, “Walk with me,” and they’ll talk while he moves to the next important task. At the same time, he’s not above rolling up his sleeves and running the cutting machine when the shop is short-staffed.

Widchardson Gedeon cuts a job with the Prism cutter. (Photo by Natasha Cancinos.)

Rivera’s dedication to his print shop stems from his decision to run it as if it were his own business. Doing this, he says, makes him feel he has a stake in the shop’s success.

This approach has motivated him to look for additional work that the in-plant can do—and then use the shop’s success in producing that work to request better equipment. For example, a few years back he set his sights on the UFT’s membership mailings, which were all being outsourced at the time. He knew he could save the organization money by bringing them in-house.

“I saw the numbers and what we were sending out a year, and I felt that, with the equipment that I had, [we would be] able to do these mailings,” he says. “But I just needed some time.”

He requested five business days to complete the 163,000-piece job, and got the green light. Things didn’t go exactly as planned, though, he says. Because of delays, the in-plant didn’t receive the job until two days before the deadline.

“I rallied the troops,” Rivera recalls—though he admits now that he shared their skepticism that a five-day job could be done in two days. Still, his enthusiasm was so contagious that everyone put forth a tremendous effort. 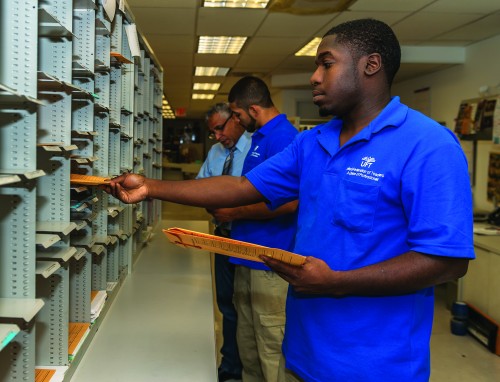 “We actually got the job out two and a half hours ahead of schedule,” he reports, proudly. “The president came down to thank them.”

Not one to miss an opportunity, he casually told the president that, if the overworked inserter had gone down during the job, it would not have gotten completed in time. The president promptly approved the money for a new six-pocket Bell & Howell Phillipsburg Mark 2 Series inserter. Then Rivera had the old inserter refurbished, leaving the shop with two inserters. Since then, the department has handled all of the UFT’s mailings.

Rivera feels the key to having a productive shop is to keep employees happy and treat them with respect.

“Thank you and please—that goes a long way,” he says, and gets a better response than barking out orders. He’s fond of shaking hands with his staff to thank them for their hard work. He also organizes special events for employees, like a Thanksgiving lunch.

“It’s just like sitting at your dinner table with your family,” he observes, adding, “We’re all a family, and the fact is, we do see each other more than we see our families at home.”

Many of his employees have been with the UFT for a very long time, he says. His assistant manager, Robert Mirabella , just completed his 25th year there.

Rivera’s mission to expand services to provide more value to UFT members started almost the instant he arrived in 2002. He looked around the mostly analog operation and quickly saw the direction it needed to go.

“I outlined what my vision was for the future,” he says. He drew up the first of many five-year plans, after researching equipment that would help the shop improve its services. To address the work that was being sent to outside printers, he met personally with customers.

“One of the first things I did was have a meeting with Graphics so I could tell them what our limitations were,” he says. Knowing this, he reasoned, they could tailor their designs to the shop’s capabilities. It worked, and more jobs were sent to the in-plant.

Once the shop got busier, Rivera came up with a plan to enlarge his facility—no small task in Manhattan. He showed his boss how much money the in-plant could save the organization if it expanded its copying, binding and mailing areas. His plan was approved, walls were removed, and the shop spread into an adjacent area.

This paved the way for the in-plant to grow its digital printing operation. Rivera is proud to note that his department was one of the first four in the nation to install a Konica Minolta bizhub PRESS C8000—and the first shop on the East Coast to have one. After beta testing it, he liked it so much he added a second C8000. Today, the shop also runs a bizhub PRESS C1085 and a bizhub C652 for its digital color work, along with two bizhub PRO 1200s and two bizhub PRESS 1250s for monochrome.

When there’s a call for signage or large photos or graphics, the in-plant has three wide-format printers ready: an Epson Stylus pro 9800, an HP DesignJet Z5400 and a KIP C7800 toner device for vinyl banners. If the UFT calls a news conference and needs a visual aid, he says, “they’ll have it within a half hour, and ready for the news conference.”

The in-plant still retains its offset presses, though: a four-color Ryobi 3404 DI, four small Toko and Ryobi presses and a 40-year-old Didde web.

“We have old technology meshed with new technology,” Rivera points out. “I’m an old offset guy. I have ink in my veins,” he laughs.

He’s clearly proud of his operation and the value it provides for the UFT. When it was threatened by the flood waters of Hurricane Sandy in 2012, he made good on his promise to come to work in the middle of the night. Fear of losing everything drove him to make his way through the flooded streets of lower Manhattan on that fateful October night. With the power out, he felt his way through the darkness and nervously opened the doors of his shop.

“It was bone dry,” he recalls. “All the equipment was safe. But I was very concerned.”

Rivera’s concern extends far beyond the equipment in his print shop, though. He values every one of the UFT’s 200,000+ members and never forgets that they are his real bosses.

This is what drives him to ensure his operation does the best possible job on every piece it prints and mails.

“We pride ourselves on not missing any deadlines, and giving a high-quality product to our members,” he says.

Rivera has plans to increase the amount of work the department insources from outside organizations, which is currently around 10 percent of its work. The revenue from this commercial work, he says, will pay for better equipment, which in turn will benefit UFT members. He’s looking for a Web-to-print portal to help him grow this business.

He insists, though, that UFT work will always come first, and he’s confident that the organization values the in-plant’s efforts.

“We’re an on-demand shop,” he points out. “If the president needs anything, we’re just a phone call away.”