At its height, the in-plant had produced some 350 million impressions per year. Retooled as a digital operation with 22 employees, it now prints 40 million mostly monochrome impressions per year, and outsources the long-run, more complex publications it used to produce on its Heidelberg Speedmaster 102.

A recent installation at the New York City operation, however, may put an end to some of the outsourcing and bring a portion of that work back in-house. 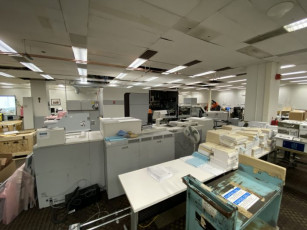 In March, the UN Publishing Section replaced two Canon digital presses — one black-and-white and one color — with a Canon VarioPrint i300 cutsheet inkjet press. The two-week installation took place even as staffing was being reduced due to the coronavirus outbreak. The facility needed some retrofitting to accommodate it, such as ventilation, plumbing, and an upgraded compressor.

Then New York’s governor ordered non-essential businesses to close and citizens to stay at home. Since then, the new press has sat idle, waiting for staff to return and begin training. The installation of an in-line C.P. Bourg finisher will be completed once the operation is back in business.

Though the ability to bring outsourced flagship publications in-house was a major reason the in-plant installed the inkjet press, even more important to Narendra Nandoe, chief of the UN’s Publishing Section, was the fact that the VarioPrint i300 can print both color and black-and-white documents with equal ease. Black-and-white reports, agendas, and budgetary documents make up a large portion of the shop’s work.

“This is basically the bread-and-butter work of the organization,” Nandoe says. “It’s going to be nice to be able to shift to that machine if we need to have black-and-white work done.”

Because the VarioPrint i300 can print color for almost the same cost as black, Nandoe intends to add color to some of these traditionally monochrome documents, such as budget reports that include charts. “Infographics are becoming the mainstay in most documents now,” he says. “We’re going to encourage people to do that.” 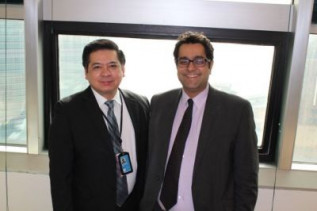 As for the UN’s flagship publications — four-color, perfect bound pieces ranging from 80 to 120 pages — the in-plant previously printed advanced copies in-house but outsourced the full runs. Demand for these publications has been on the rise, Nandoe says. He hopes to return some of this business to the in-plant with the VarioPrint i300.

“The quality is pretty impressive,” he says of the inkjet press. It’s not offset quality, he adds, but “you have to manage your expectations with inkjet, as you do with toner.”

The in-plant’s interest in production inkjet started back when Océ first introduced the VarioPrint i300 in 2015. Though Nandoe didn’t see it as an option at the time, as he researched inkjet and read articles in IPI about users, he began to give the technology more serious consideration. When he realized an inkjet press could handle his operation’s black-and-white needs, allowing it to save money and space by replacing two devices with one, he was hooked. “The overriding factor was that we could maintain the black-and-white production on the [inkjet] equipment,” he says.

Overall, he is pleased with the decision to move to inkjet, and looks forward to getting the new press up and running.

Related story: United Nations In-plant, A Year After the Flood

From the Editor: In Sandy's Wake

Inkjet: It is Here and Now