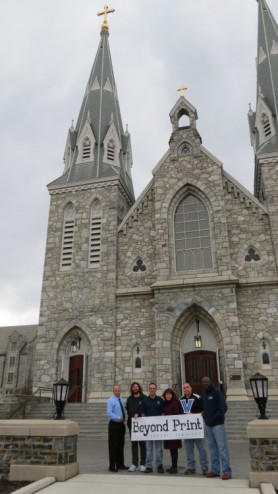 Wide-format printing was something that Michael George couldn’t resist when he came across a Canon demonstration at Graph Expo 2004. The director of Central Services at Villanova University was walking the show floor and saw a demo of what was then still an emerging technology. Taking a leap of faith on diversifying his offerings, George purchased the Canon imagePROGRAF machine and a laminator, and the rest, as the cliché goes, is history.

George notes that wide-format success didn’t happen overnight, but once it took off, it did happen fast. In 2005, “we made an arrangement with a few academic departments to print posters for student projects,” he says. “That was the start of it.”

From there, the in-plant began to market to its on-campus customers, letting them know wide-format was now also an option, in addition to the digital and offset printing the shop was providing for them.

Events, in particular, really drove the growth of Villanova’s wide-format operation. The shop created posters for outside of event breakrooms and directional signage. It evolved from simple paper posters to pieces that were laminated and mounted on foam core, which brought the shop more attention.

“It was part of the evolution of print,” George notes, pointing out that as increasingly more campus departments were looking to shift from ordering thousands of brochures to promote an upcoming event, they might instead produce 10-15 posters and place them strategically around the campus. “We were changing with the times. We marketed it as a cost savings against digital printing — they would still do 100 brochures to hand out, but for the most part, wide-format was a substitute for the declining print volumes.”

From that single machine, the in-plant started to experiment and grow. Today, Central Services is running a 64˝ Canon imagePROGRAF, as well as an HP Latex 365, a device that really expanded the types of applications the shop could take on.

“The transition from inkjet to latex was a critical turning point,” says George. “Once we added it, we opened up a whole new market in signage, metal panels, exterior graphics, interior wall graphics, etc. It was really the turning point in our wide-format business.” 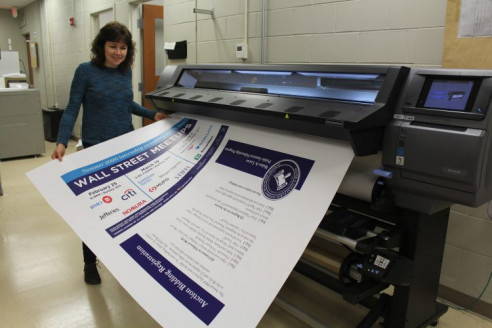 Barbara Joyce prints a graphic on the HP Latex 365.

To do that, the in-plant began to develop the “wow factor” across campus. It would produce a graphic for one department that really got attention, and other departments would see it and call the in-plant, asking how they could use such a graphic to promote their own services.

One project that George notes is popular right now is overprinting on vinyl and then mounting the piece on clear acrylic.  “That has a lot of wind in its sails right now,” he notes. One example of this is a donor board, where a department can honor those who have contributed to its mission.

“Rather than have to redo the graphic every time they want to update it, we can just reprint the inside panel. They can update it as often as they like,” he says, including before big events, keeping the information dynamic and up-to-date at all times.

Wall graphics and even acrylic panels aren’t uncommon for university in-plants, but the creative minds at Villanova sought to take their wide-format capabilities in new and innovative directions. One great example of that is the shop’s coffee urn project. 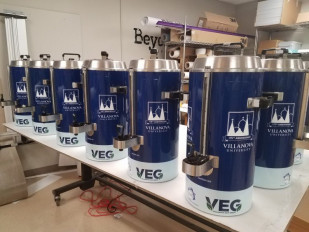 Wrapping 70 coffee urns for Villanova’s 175th anniversary brought a lot of visibility to the in-plant and has led to additional business.

“In 2017 we [Villanova] celebrated our 175th anniversary,” says George. “That was a pretty big deal. Our dining and catering services had a lot of events. They had these plain coffee urns they would set up, and as the 175th was getting started, they came to us and asked if we could generate a decal to make them look better and promote the event. And we said, ‘instead of a decal, why don’t we do a wrap?’”

George’s team came up with a concept and a prototype, and the catering team loved it. The in-plant ended up producing around 70 wrapped urns for the celebrations. And once the year was over, the client had George and his team remove those wraps and replace them with generic Villanova wraps to keep the branding going.

“Now that generates ongoing business,” he declares. “Other departments are at events, see the urns and want them. So we create a concept and wrap those as well. We’re up to around 100 of them now.”

He points out that to find an outside printer that can wrap coffee urns and install them whenever needed would be a lot more complex than having an in-house team do it. Using its wide-format equipment and ingenuity, the team is continuously looking for new ways, like this one, to be invaluable to the university.

When the in-plant encounters a new project it wants to take on, employees learn everything they need to know, George says. Installation of the wide-format graphics, for example, wasn’t done by a dedicated person, or by someone with past experience. Instead, George and his full-time wide-format specialist took it on as a “trial by fire,” learning as they went.

“We carve out time to do it, and just figure it out,” George says. The shop today installs 80-90% of the projects it prints, George notes, and he believes that ability to provide a full-service project from concept to installation makes it more appealing for on-campus departments to come to the in-plant, rather than go outside for their jobs. 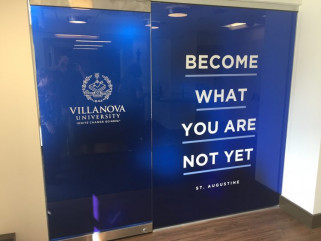 Printing and installing highly visible wall wraps and glass graphics created a “wow factor” for the in-plant, inspiring customers to order similar graphics for their own offices.

All that hard work is paying off; in the last fiscal year, wide-format printing made up 12-16% of the 15-employee in-plant’s revenue, and George notes that for this year, wide-format is already on target to hit 20% of the shop’s revenue.

“We had to generate new revenue going into this. Print jobs were going away, and we needed to backfill the revenue from these missing jobs, which is what led to the expansion of wide-format,” he notes.

George holds to the old adage, “if you build it, they will come.” He encourages other in-plants not to be afraid of the wide-format space.

“There are only opportunities there,” he notes. “It is rocky at the beginning, but before you know it, they will be relying on you. There is just a lot of expansion possibilities in that space.”

Beyond the Car: Vehicle Wraps Encompass so Much More

Three New Challenges of the New Normal
END_OF_DOCUMENT_TOKEN_TO_BE_REPLACED
Upcoming Webinars
Print Outlook: What to Expect in the Year Ahead