More than 240 higher-ed in-plant employees around the globe got an almost "normal" conference experience in April when the Association of College and University Printers held its three-day virtual event.

Stripped of its ability to hold an in-person conference for the second year in a row due to COVID-19, the Association of College and University Printers (ACUP+) did the next best thing last month: it held a three-day virtual conference that mimicked its traditional event in nearly every way. It even included in-plant tours and after-hours networking, which enabled managers from Alaska to Scotland and everywhere in between to converse in real time via Zoom.

The result was a community-binding event that came as close to an in-person conference as the 240 registrants have experienced since 2019. Each session and roundtable discussion was conducted live via Zoom, allowing attendees to ask questions and share ideas, with conversations flowing much as they do during live ACUP+ conferences. 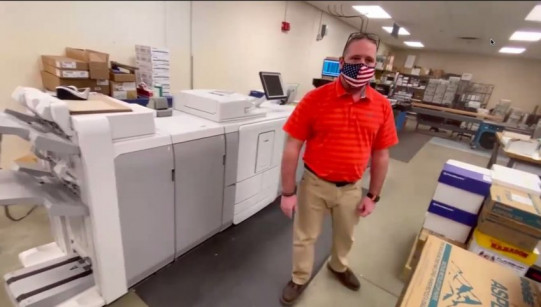 Brandon Karcher shows off the University of New Hampshire's in-plant during one of the virtual tours.

The virtual vendor floor, though more limited than the dozens of displays at a live ACUP+ conference, was a success, giving attendees face-to-face time with sponsors like Canon U.S.A., Rochester Software Associates, Brynka, Mactac, and Konica Minolta, who were able to demonstrate their systems from their own show floors and have in-depth conversations with attendees.

As at a live ACUP+ conference, the event ended with an awards ceremony in which six in-plants and two individuals were honored.

The conference opened with keynote speaker Bob Kelly, an Emmy Award-winning traffic anchor at Fox 29 in Philadelphia, who gave an animated presentation about how to reinvent yourself and your business in a rapidly changing environment. More than 150 people from all over the world attended the opening presentation to hear Kelly discuss his successful switch to broadcasting traffic reports from his home during the pandemic. He stressed that the work-from-home trend is unlikely to disappear once the pandemic ends.

The second day’s keynote speaker was In-plant Impressions Editor Bob Neubauer, who tapped into brand new IPI research to offer a glimpse at how the in-plant industry is coping with COVID-19, and which services and applications are still keeping in-plants busy. He talked about new equipment in-plants have implemented during the pandemic and in-plants managers’ feelings about resuming travel to industry events later in the year.

In a session on production inkjet, Canon inkjet press users Craig Seybert from Penn State Health and Chuck Werninger from Houston Independent School District (HISD) talked about the benefits inkjet has brought to their in-plants. Werninger noted that the surge in demand for curriculum materials at the beginning of the pandemic caused his shop’s volume to surge from 1 million to 5 million impressions. Thanks to his shop’s Canon varioPRINT i300 inkjet press, HISD was able to keep teaching children during those months.

“Inkjet gave us a tool that will reliably run large volumes very cost effectively,” he said.

Seybert noted that his in-plant’s Canon varioPRINT iX-series sheetfed inkjet press replaced two toner devices and has taken on most of the shop’s work.

“We have moved probably 85-90% of our work to the iX,” he remarked. By year’s end, his shop will entirely stop using offset and transition all that work to inkjet. The quality coming off the iX is so good, he adds, that his marketing department couldn’t be more pleased.

A concurrent session on pricing strategies featured Penn State’s Joe Geffre and John Yerger from the University of Nebraska, Lincoln, offering their tips for giving customers consistent pricing, regardless of the equipment used. It’s crucial, Geffre stressed, to average the pricing on different pieces of equipment so customers get a consistent price. This way, customers can’t dictate which equipment they want you to use based on price. It also simplifies billing and makes it easier to communicate how your pricing works to upper management.

Yerger suggested having staff act as “secret shoppers” to get prices from local printers for comparison’s sake. He also noted that in-plants should charge internal and external customers the same prices for the same work. 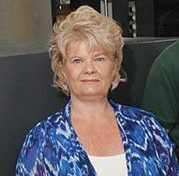 In a roundtable on equipment justification, Donna Horbelt, with the University of California, Davis, talked about the equipment upgrades she has carried out in her first year on the job (as detailed last month in IPI). These included two Xerox Iridesse digital color presses, a roll-fed 60” Mimaki UCJV300 print-and-cut device and a Mimaki JFX200-2513 flatbed printer. She and Bob Donahue, of Franklin University, stressed that in-plants should create detailed specifications before approaching Procurement with a plan to add equipment. Research what sets a piece of equipment apart from others, Horbelt advised, and emphasize that aspect in your specifications. Also, she added, get IT involved early in the process. If other universities are using that equipment, make sure your boss knows that.

“Our bosses love to hear what other people are doing,” she said.

In a session on selling promotional products, Carmen Cusmano and Eddie Van Keuren from Yale University Printing and Publishing Services (YPPS) described the in-plant’s successful promo products business, which differs from the model other in-plants have used. YPPS is not operating as a distributor through a membership in ASI, SAGE or another promotional products organization, but instead has partnered with a promo products vendor and negotiated lower prices. The in-plant has hundreds of promo pieces on its website for customers to order, and they pay 15%-20% less than if they ordered these pieces on their own. YPPS is still able to make a profit from these sales, they said.

In a session on Wide-format Applications, Gary Warren, of Fayetteville University, showed an instructive video depicting he and an associate wrapping a delivery vehicle using a variety of tools. The video also showed off other impressive wraps the in-plant has done on campus (including a police car). Warren recommended in-plants engage with the Wrap Institute (WrapInstitute.com) to refine their wrapping techniques.

Also in that session, Chris Myers of Arizona State University, showed examples of the many wide-format projects his in-plant is creating: floor stickers, graduate yard signs, banners for vaccine sites, wall graphics, and more. One unique project was the creation of face masks, produced using a heat press to add the ASU logo. The in-plant also printed stadium fan cutouts, printing onto a pre-cut substrate using a Fuji flatbed printer.

Screen shot from a session on wide-format printing.

Mario Maselli from the University of Hartford led an informative roundtable discussion on apparel printing, which his in-plant has provided for the past 10 years through a combination of in-house production and outsourcing to local vendors. For orders up to about two dozen, Print Services uses its Roland printer to print and cut vinyl graphics, which are fused to garments using a Hotronix heat press.  The in-plant buys shirts directly from mills, Maselli said. A white shirt costs about $1.65, he said, and can be sold after printing for $6.50. 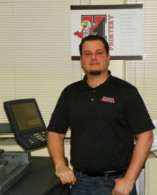 Before the pandemic, Maselli said, his shop handled orders for 32,000 pieces of apparel a year, and printed 30% of those in-house. It generated a profit of about $20,000 a year from this business. Other in-plants can get into garment printing with a minimal investment of about $5,500, he said, for a printer and a heat press.

Other interactive roundtables covered Web-to-print, staffing solutions, package lockers, and copier management. Managers asked each other questions and offered advice, much like during an in-person ACUP+ conference.

The conversations carried on in the after-hours networking sessions, where two dozen managers gathered to talk. At one point, in-plant managers from the U.K. and Australia were in on the discussion, chatting with U.S. and Canadian managers from both coasts and Alaska. With no major technical flaws, holding the virtual ACUP+ conference as a live event appears to have been a big success, giving members the feeling they spent three days with their in-plant peers from around the world.

At the ACUP+ member meeting it was revealed that the association plans to hold its conference live in 2022 at the location where it intended to meet this year: Vancouver, Wash., across the Columbia River from Portland, Ore. With the success of its virtual conference this year, the group plans to incorporate a virtual component to the 2022 conference for those unable to attend the event in person.

In-plant managers from Australia, Scotland, and all over the U.S. chatted during the after-hours networking sessions.