A “huge improvement” is how Anna Mendez would describe the new wide-format capabilities that San Bernardino Community College District Printing Services has gained since adding a new Mutoh ValueJet 1324 wide-format printer and cutter in May.

Prior to getting the Mutoh, the six-employee shop used a 10-year-old Epson Stylus Pro 9800 to print posters and yard signs in its Redlands, Calif., in-plant. But that printer was limited in what it could produce. With the new Mutoh, the in-plant can now print large-format advertisements, stickers, wall and floor decals, window clings and larger size banners and posters, says Mendez, Printing Services supervisor. The shop can also print onto adhesive paper and vinyl. 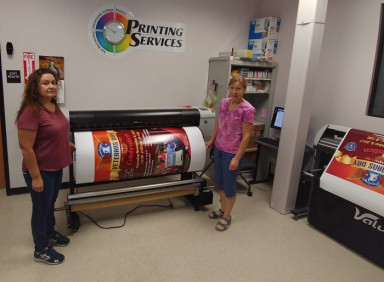 “Prior to the Mutoh, we would laminate the posters that were coming out of the Epson to make them last. But we are now able to print on a vinyl material with ink that will last outside from one to three years, depending on the weather,” Mendez explains. “The yard signs that we produced on the Epson were previously laminated and then glued on to a plastic board. Now, we just print it on the vinyl adhesive, which is water resistant.”

As a result, departments are now able to hold onto the materials for a longer span of time.

The automated cutter came with the Mutoh press, says Mendez, and has also allowed the in-plant to provide new services with stickers, labels and window clings for departments to use outside of their offices. Another plus is that the software is user-friendly, adds Graphics Specialist Designer Debbie Castro.

“The Mutoh is a lot faster, and the quality of printing is a lot sharper and crisper,” Castro points out. “The materials that we’re able to print on [are] a vast improvement.”

Mendez notes that she chose the Mutoh because a lot of other local educational and district offices near the college highly recommended it.

“I also did my research, and for the price, this was the better piece of equipment,” she adds. “The ink and the paper also cost a lot less than they did on the Epson.”

To advertise its new capabilities, Printing Services created a marketing brochure that it sent and emailed to San Bernardino Community College District’s two campuses and to its district office.

“I received immediate feedback, and everybody was really excited,” says Mendez. “Our production has also increased quite a bit since announcing it.”

“It’s been a lot of word of mouth, where staff from another department will ask ‘where did you get that?’ They then refer them back to the print shop,” notes Castro.

Mendez explains that the in-plant was able to justify the cost to management because some of San Bernardino Community College District’s departments were spending more on outsourcing these materials.

“We met with them and they were willing to spend that money here, which meant that we were going to see a return on investment in less than a year,” she says.

While still learning what the Mutoh ValueJet 1324 is capable of, Mendez, Castro and the staff at Printing Services, are enjoying the learning process.

“We are purchasing new materials as the requests come up and experimenting with them and learning how to do more specialized projects like pull banners and pockets for those banners,” concludes Castro.

Masters of the Art