Wide-format printing is a sound investment for in-plants— especially those willing to push the boundaries and experiment.

In-plants that have added wide-format printing agree that it was a wise move and encourage other in-plants to do the same. It will bring in new business, increase the in-plant’s value and deliver a fast return on investment, they say. But finding the right device will require some research.

“Don’t be taken in by all the bells and whistles,” advises Tammy Slone, manager of Retail Services at Cedarville University. “Be pragmatic about what you think you really need to meet the needs of your customers.”

Talk with them about their wide-format plans, and look at the projects they’re printing now on the outside. Find a device that will let you bring that work in-house.

“The more important you are to the university and the less that goes off campus, the more valuable you are,” points out Randall Bramlett, director of Columbus State University Printing and Mailing Services.

Once you have added a wide-format printer, the work will come, say those who have done so, and the equipment will soon pay for itself.

“Purchase a printer, rather than lease because they’ll more than pay for themselves in the amount of business they’ll return in a short amount of time,” observes Richard Malvino, prepress supervisor for for the City of Los Angeles.

“Really look into it because the margins are incredible,” adds Wesley Grigg, manager of Elon University Print and Mail Services. “It is certainly a business we should all be in.”

One of the City of Los Angeles Publishing Services Division’s three 60˝ HP 5500s prints a poster for the police department.

If you’re in need of, say, a 60-foot-wide banner and you work for the City of Los Angeles, you’re in luck. At the city’s Publishing Services Division, Richard Malvino, prepress supervisor, says custom-sized banners are not a problem. When the team gets an order for an oversized banner, it creates smaller banners to piece the image together in an overlapped tiling effect. Publishing Services recently produced an outdoor display for City Hall that measured 12x60', made of 12' -long and 5'-wide banners.

For the Publishing Services Division of Los Angeles, adding wide-format printing more than a decade ago was a decision based on a very specific need: they wanted to create press proofs. Now, between its two locations in the city, the team has three 60˝ HP 5500s, a 42˝ HP 5500 and a 44˝ Epson 9800.

The in-plant has graduated from proofs and banners to items like self-adhesive vinyl posters up to 60˝ wide, which Malvino compares to “Post-it” notes, with a light tack on the back. This material has been used to print decorative wall art and informational posters for city buildings. Excitedly, Malvino also describes the in-plant’s ability to print on different textures and colors of removable vinyl, even metallic.

“Wide-format was very surprising to us,” he says. “When we first put it in, we didn’t think much of it.”

Now, however, everything has changed.

“We’re completely blown over by it,” he reveals. “We saved the city tens of thousands of dollars.”

A similar story is being told at in-plants around the country. Once they add a wide-format printer, they quickly discover new applications and end up with far more business than they had imagined.

Gone are the days when banners and posters were the only things in-plants printed on their wide-format devices. These days, they’re pushing the limits to create one-of-a-kind items to expand services to customers and ultimately increase their shop’s value. 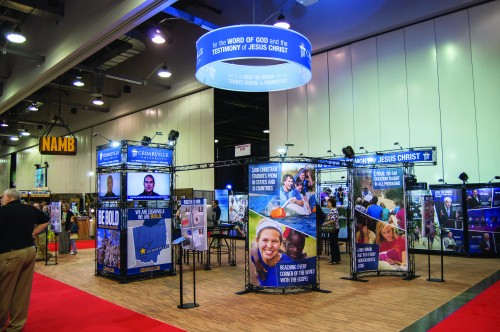 At Cedarville University in Cedarville, Ohio, when the school needed signage for a trade show, University Print Services stepped up and created a hanging circular trade show banner with its new HP Latex 360, saving the parent organization thousands of dollars.

“It rivaled anything that a major corporation would have at a trade show,” remarks Tammy Slone, manager of Retail Services.

Last November, the in-plant added the HP along with a Graphtec FC8600 cutting plotter to expand its wide-format capabilities. Although the in-plant ran a Canon imagePROGRAF iPF8000 for many years prior to adding the HP and Graphtec, the Canon inkjet printer couldn’t provide the outdoor signage that customers were requesting because lamination was too expensive. After realizing that customers were going off campus for their wide-format work, the in-plant added the latex printer to meet customers’ needs.

One of the best aspects of the HP is the software, because of its flexibility. Grant Johnson, digital press operator for Print Services, explains that an operator can enter a small design and develop a larger design, such as wallpaper, without losing quality.

“You can enter something smaller, say 12x12˝, and you can repeat it on ‘X’ size, and figure out exactly how much you need and print strips of it,” Johnson says.

Since adding the new equipment, Print Services has created stickers and window clings with the help of the Graphtec cutter. The in-plant also created lightweight woven fabric banners for the admissions counselors to hang when they travel, saving the university money and creating a more than 100 percent profit margin. Slone explains that the banners were $175 when the university was buying them off campus; when the work came in-house, Slone and her team cut that charge to $90, using only $30 in materials and ink.

Recently, University Print Services held a contest on campus to win a large canvas print from an image submission. There were approximately 100 submissions, and four were chosen. The “Grand Prize” winner received the largest stretched-canvas print, equaling 24x36˝ in size. The remaining three winners were of varying smaller sizes, but all four were hung outside the print shop to display the team’s capabilities. Although the in-plant doesn’t currently have canvas-stretch and mounting capabilities, it is looking into economical ways to add the service.

In the future, Slone and her team hope to get more involved with floor graphics and with the athletics department by providing locker and hallway wraps. Slone pictures the cinder block hallway leading to the men’s basketball locker room lined with a wall wrap of the players to serve as “an intimidation factor” for visiting teams.

Print Services recently held an open house, and Johnson gave demos on the HP, which brought an increase in orders. The in-plant plans to have another one in 2016.

Many in-plants have found that word of their wide-format services travels fast. At Elon University Print and Mail Services, with only a month of wide-format printing under its belt and some word-of-mouth marketing, the “floodgates have already opened,” remarks Manager Wesley Grigg. The in-plant had been outsourcing all of its wide-format printing via a contract with Office Depot, but the volume was so high it made sense to bring the work in-house. So the Elon, N.C., in-plant installed a Ricoh Pro L4160. Though Grigg hasn’t officially announced the new capabilities, word has already spread throughout campus.

Although it’s only been a month, the in-plant hasn’t wasted any time diving headfirst into the world of wide-format printing. The team created backlit signage for the school’s athletic department, which was installed in two outdoor directories at a local shopping center. The end product was a 59x70˝ piece complete with backlighting to shine through the polyethylene terephthalate (PET) backlit film.

Although the in-plant has already seen some success with its new Ricoh equipment, Grigg says the one thing he would change if he could do it over would be to get a flatbed printer. However, he explains that the Ricoh will soon pay itself off, and he plans to look into flatbed printers when it does.

At Columbus State University Printing and Mailing Services in Columbus, Ga., Director Randall Bramlett and his team did just that. Approximately two months ago, the team installed a 64˝ Mutoh flatbed printer to complement its existing 44˝ Canon wide-format printer. The new flatbed equipment prints directly on board material, eliminating the need for mounting.

Four years ago, Bramlett saw a lot of wide-format work going off campus, so he orchestrated the first wide-format purchase.

“Canon is a workhorse,” he says. “It prints on a variety of stocks, and it allows us to meet a variety of needs.”

Because the new Mutoh prints directly on a variety of materials, it opens up the opportunity to go beyond banners and posters. The in-plant can now print yard signs and decals, and as Bramlett explains, it can potentially print on wood and glass, although the shop hasn’t tried that yet.

“We want to expand further,” he says. “We are just not sure where the market is going to take us.”

In addition to the new printer, the in-plant also added a 52˝ ValueCut printer and upgraded software for contour and shape cutting. One of the most interesting items the shop has printed was an adhesive decal of the university’s cougar logo for the school’s welcome picnic. The red, white and blue cougar was diecut to capture the detail of the school mascot. Clemson University’s Campus Banner + Design (CB+D) operation provides graphic design and print production services to the university. With two permanent staff, 22 student employees in the summer and up to 30 during the year, the Clemson, S.C., shop uses a Roland SOLJET wide-format inkjet printer and recently added an XR-640 printer/cutter with metallic and white ink.

Most of the shop’s daily production is run for various departments on campus, from Student Housing to Financial Aid. CB+D runs sheets of decals and promotional banners daily, as well as mounted signs and wall wraps.

The student-run business also does a lot of work for the university’s athletic teams. For example, the shop designed, produced and installed 500 square feet of wall graphics for the campus’ Olympic weight room. In addition, the department produces wall graphics, banners and signage for the tennis, soccer and baseball teams.

CB+D recently provided graphics incorporating the school’s tiger mascot to enhance the golf team’s practice facility. They designed an enormous pair of tiger eyes to cover the two garage doors of the facility where the team’s equipment is stored.

In addition to creating graphics for use on walls and other “traditional” surfaces, CB+D also designs, produces and installs vehicle wraps for the university. The staff has wrapped cars, small buses and even golf carts for the campus Parking and Transportation Services fleet.

CB+D recently completed a large job for Clemson’s Jervey Gym. The project included several large wall murals and was the shop’s largest project to date that was entirely student-run. Taylor calls this job “a significant accomplishment that wouldn’t have been possible without the Roland.”

Pantone Introduces Its 2023 Color of the Year
END_OF_DOCUMENT_TOKEN_TO_BE_REPLACED