Worth the Wait: Flatbed Finally in Action at UNC-Wilmington 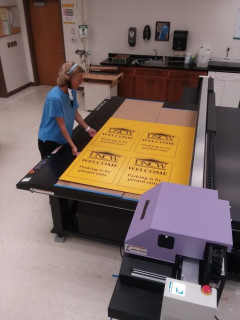 After years of research and planning, SeaPrint Graphic Solutions at the University of North Carolina, Wilmington, finally got approval last year to purchase a wide-format flatbed printer. It turns out that was the easy part. Getting it installed and operational was a much bigger challenge.

Last year, the seven-employee in-plant went out to bid on a Mimaki JFX200-2513 UV printer, which can print onto media up to 1.97˝ thick, including irregularly shaped media. The winning bid came with one small caveat: it did not include delivery.

That forced the in-plant to secure a private rigger to transport and install the new printer. Then the shop encountered a new problem: the machine wouldn’t fit through its doors.

“We ended up having to tear our walls out,” says Production Manager Steven M. Barrett. The shop’s 6´ door was turned into a 9´ door by cutting into a 4˝-thick sheetrock firewall.

By late January, those hurdles had all been cleared, and the Mimaki JFX200-2513 was finally sitting on the in-plant’s floor. But a delay in hooking up the power postponed training until March 9. A few days later, the country shut down. 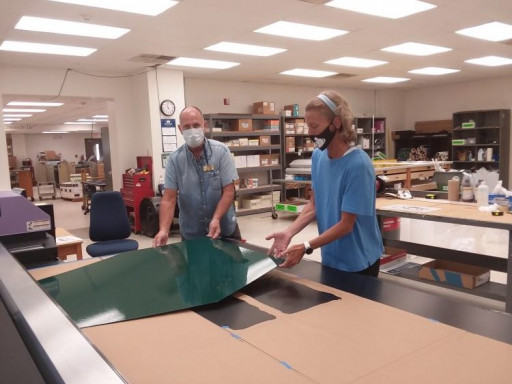 The machine sat idle for six months while SeaPrint Graphic Solutions’ staff worked from home. Barrett and others would occasionally come into the shop to run jobs on their new Xerox Versant 180 and D110 printers, glancing wistfully at the silent Mimaki.

In July, a technician was finally able to finish setting up the printer and test it. That was when he made a disappointing discovery.

“The printheads were not working properly,” Barrett reveals. They had dried out during the printer’s long sabbatical and had to be replaced. Fortunately, Mimaki replaced them without a charge. (Less pleasing was the news that all of the ink had nearly expired from sitting so long; ink bottles that were mostly full would have to be replaced.)

In August, the in-plant finally ran its first job on the Mimaki: an aluminum informational sign for a campus rain garden.

“The detail is incredible,” praises Barrett. 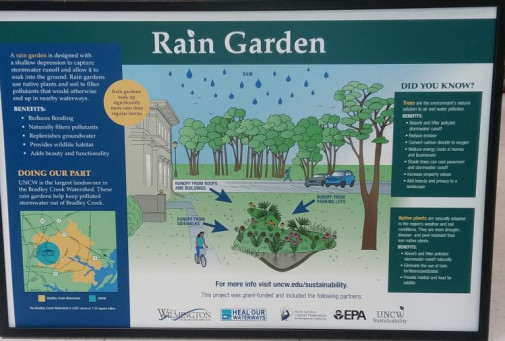 Since then, the shop has run more than 100 lawn signs, printed directly onto Coroplast. This is much easier than the previous process of etching designs onto vinyl with a Graphtec FC8000, peeling off the excess material, transferring the graphics onto adhesive material, and mounting.

“All those steps are gone,” enthuses Barrett. “The labor that we’re saving is incredible.”

Barrett says getting out of the vinyl business was a prime motivation for buying the Mimaki.

“We’re seeing the trend across the country of going from vinyl to flatbed, and we could definitely see we have a market for it here,” he says. “It gives us an opportunity to grab more work.”

The in-plant just printed an order of parking signs on thick aluminum. Barrett expects to get many more such sign orders, with all the construction on campus.

“Every sign on campus comes through us,” he says.

Barrett also has other ideas of how to use the Mimaki to bring in business, such as by printing on the backs of smartphone cases and laptops to personalize them. The Mimaki could print on paving bricks used on campus walkways, or directly onto an office door, he says.

“I want to print on ceiling tiles,” he adds, an idea he got while staring at the ceiling in a dentist chair.

“If you’re a school that does a lot of vinyl, flatbed is the way to go,” he advises other in-plants. “The folks that don’t have one, I think they need to truly invest their time in researching it. I think you’ll see it’s going to help your labor rate.”