As COVID-19 picked up in the spring of last year, Yale University, like most higher-ed institutions, found itself in need of floor graphics to direct those on its New Haven, Conn., campus to socially distance correctly. At first, the project was outsourced, but when the results came back with colors that didn’t match the university’s branding, John Heine, digital production manager at Yale Printing & Publishing Services (YPPS), started to look into what it would take to bring that work in-house.

“Yale blue is a very specific, hard-to-get color,” Heine says. “And color is very subjective; people see color in different ways. But we have been producing it on different devices for so many years. [So,] when that came in, it was ‘uh oh.’ But there was nothing we could do — we had to get the signage out.” 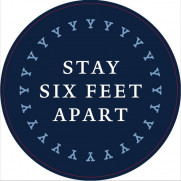 Heine and his team quickly realized that, with an HP Latex 315 already in place, the only equipment missing to allow YPPS to produce the required floor graphics was a contour cutter. So, in July 2020, a Graphtec FC 9000-140 contour cutter was installed, and a new substrate was sourced, since Yale Environmental Health and Safety required that all floor graphics be non-slip. Ultimately, the in-plant went with TexWalk specialty graphics media, made by Jessup Manufacturing Co. YPPS Production Coordinator John Poitras was instrumental in selecting the TexWalk stock. In August 2020, that was followed up with an upgrade to Onyx Graphics software, which Heine notes interfaces directly with the cutter.

“Rather than go to a separate program, and setting up a separate file for cutting, when we send the file to the printer, it adds the cut information, and when the file is done printing, just click a button and it goes right to the cutter,” he explains.

The combination of cutter, substrate, and software allowed YPPS to bring the floor graphics entirely in-house, ensuing the brand color was on target every time, as well as reducing the time required to produce and install needed elements. In addition, Heine notes that bringing the floor graphics in-house led to “substantial savings” and even generated some revenue – important since the in-plant operates on a cost-recovery basis.

Heine credits his team at YPPS for getting the entire system up and running quickly, although he does note there were a few growing pains. But operators Alex Nester and Christian Garcia, along with Michael Ferguson in the prepress department, were able to create a system that ensured all the needed information was in a single file.

While YPPS has now produced around 7,500 floor graphics — or 11,450 sq.ft. — since installing the contour cutter, Heine notes he is now looking at new ways to expand what the in-plant offers. At the moment, he says, the in-plant is testing window clings, which he is excited about, along with a variety of shapes and materials to get a better feel for applications the in-plant can offer.

“We are able to cut basically any shape at all,” he notes. “If you can imagine it, we can cut it, as long as it’s on something the machine can handle.”

Thus far, the only limitation the in-plant has found has been related to the sheet size — the shop’s HP Latex 315 can print up to about 50˝ wide, Heine says, although the print’s length can go as long as the roll.

“In theory we could cut 100 circles, one right after the other,” he notes.

That said, Heine doesn’t expect the floor graphics to go away any time soon — and in fact, he doesn’t see the need ever going away now that the in-plant has started. Not only will new projects crop up, but, he predicts, since the graphics aren’t designed to last forever, they will need to be replaced regularly. In fact, that first batch — with the incorrect brand colors — is already starting to fade, he says. At the beginning of the next semester, those graphics will be reprinted in-house and re-installed, he says.

“There will be a lot of replacing going on,” Heine notes.

The window clings, in particular, are something he’s excited about offering, since not only is this a new product, it is moveable, “and you can put it on the wall and it won’t hurt the paint. We’ve explored that, and really, the opportunities are endless.”

Looking further out, Heine notes that the next piece of gear he would like to see installed is a second HP Latex machine, which has proven to be a “beast, easy to maintain, and relatively inexpensive,” he says.

The shop operates other wide-format equipment as well, but the HP has “paid for itself. It might not be the most super-duper large-format equipment out there, but it suits our needs. It was relatively inexpensive — I think we got it for around $9,000 — the parts are surprisingly affordable when we need to replace them, and it just runs — and we have run it.”

Beyond the COVID-19 floor graphics, the contour cutter is already sparking interest among customers in other types of projects. It has proven to be a great investment for the in-plant, and one that Heine believes every in-plant should consider.

Yale’s experience is the perfect example of how an unexpected hiccup can lead to new opportunities if an in-plant is willing to explore all the options.

Duplo USA to Host Open House in Chicago Next Month