Technology Trends from the InfoBlog
September 13, 2016

What to Expect at Graph Expo in Orlando

Graph Expo’s greatest strength this year could also be its greatest weakness. Coming on the heels of drupa, Graph Expo (Orange County Convention Center, Orlando, Sept. 25-28) will be a great opportunity to see some of the latest product announcements made at drupa. That said, many exhibitors maxed out their marketing budgets at drupa, and the impact on Graph Expo will mean smaller booths and fewer support staff. The move to Orlando is likely to have an impact as well. It is yet to be seen whether the draw from southeastern states plus South and Latin America will balance off the commercial printers from the heartland who drove to Chicago for previous shows (and who may skip the show this year). Graph Expo 2016 will be a smaller, more compact version of the show, and yet that’s no reason to stay away. There will still be a lot to see.

Who Are the Largest Exhibitors?
InfoTrends has been measuring and comparing the booth sizes of trade show exhibitors at trade shows for many years now, most recently at drupa 2016 but also at Graph Expo in 2015. We believe it provides an important metric to assess the level of marketing spend that an exhibitor makes at a trade show.

The biggest Graph Expo 2016 exhibitors (by square foot of exhibit space as measured from the publicly available show floor map) are shown below. 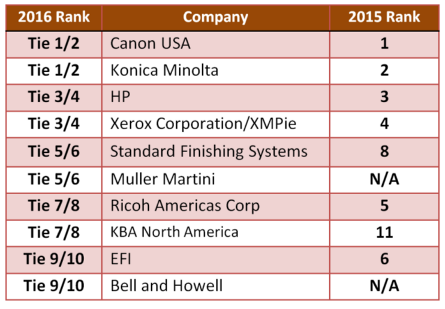 Canon and Konica Minolta tie for the top spot. In fact, because of the show floor layout, in which many booths are of equal size, the top 10 exhibitors all fall into two-way ties with another exhibitor. Notable on this list are Muller Martini and Bell and Howell, which are new to the top 10 in 2016. Two key top 10 exhibitors from 2015 have decided not to exhibit: Kodak and Pitney Bowes. Each will have representatives at the show, but no dedicated booth space. One other 2015 top 10 exhibitor, KIP, has dropped out of the top 10 but is still exhibiting. Another interesting aspect was revealed through the measuring process. The show floor will be noticeably smaller compared to Graph Expo 2015. Our measurements indicate that the reduction is in the range of about 30%.

Must See ‘Ems
Every year, the Graph Expo organizers reach out to exhibitors to identify new and recently announced products that merit special attention. These awards are called Must See ‘Ems and represent a range of product categories. If you are going to be at the show, definitely pick up one of the Must See ‘Ems brochures and use it to guide your visit. The Must See ‘Ems have been announced already. See the Must See ‘Ems press release for the full list.

Six drupa 2016 Print Sample Videos
In many ways, announcements at drupa 2016 will shape Graph Expo. For a little flavor of the types of print samples that could be found at drupa, have a look at these six recently recorded print sample videos:

To see all of my print sample videos, check out my YouTube page.

InfoTrends’ Matt Swain will be moderating an Xplor breakfast panel on Tuesday morning entitled Customer Experience: A Critical Factor for Achieving Success. This panel will focus on the importance of the customer experience as well as understanding customer expectations.

InfoTrends is a member of the Printerverse Alliance, which has a number of activities at the show. Pat McGrew of InfoTrends will be presenting in the Printerverse theater (Booth 701) on the topic of Are Your Bits Fit? Integration Without Perspiration at 4 p.m. on Tuesday. Ryan McAbee will participate in a panel called The drupa Effect: What’s Next Is Now on Wednesday at 1:15 p.m.

And don’t forget that Tuesday is Girls Who Print Day. Pat McGrew (past Girlie award winner) will be on a mentors panel at 12:30 in the Printerverse theater. She will be joined by Mary Beth Smith, Cary Sherburne, Jules VanSant, Vanecia Carr, and Chris Echevarria. The panel will be moderated by Deborah Corn.

Keeping Informed
Follow me on Twitter (@jrhinfotrends) and also track the hashtag #graphexpo to keep up to speed on what others are saying about the show. InfoTrends clients looking to see the latest as gathered by our news editors should go to the ‘My News’ section of our password-protected Website and use the title search tool. A search on the term "Graph Expo" will bring up dozens of items. InfoTrends clients will also have received an invitation to our annual breakfast. If you have not received an invitation, please let me know.

In Closing
I’m looking forward to Graph Expo 2016, and not only for what I expect to see on the show floor. Educational and networking opportunities will abound. I am particularly excited about the various sessions mentioned above. I hope to see you in Orlando!

5 Reasons to Expand into Direct-to-Garment Printing

END_OF_DOCUMENT_TOKEN_TO_BE_REPLACED
Subscribe
COVID-19 on In-plant Impressions
Reopening Of America: What Will This Look Like For Businesses Across The US

Greg Stecker will describe how his business grew from traditional offset toward high-margin display graphics.