The recent In-plant Printing and Mailing Association (IPMA) conference was filled with informative sessions for in-plant managers. One of them featured a panel of leaders from Orange County Public Schools, Alfred State College and the University of Delaware who offered ideas to help in-plants succeed in four areas: new technology, business management, workforce change management and relevancy.

Chris Reed, Orange County Public Schools’ director of Materials Management, discussed how his in-plant successfully used a project management approach when implementing new technology. Noting that the most important aspect of using a project plan was that it kept them organized and provided a communication plan. Reed said, “A communication plan goes both ways: downward to our employees, but also, more importantly, to our executive staff. Now our senior leadership is involved in what's going on, and they know whether or not we're on schedule.”

At Alfred State College, Catherine Chambers, director of Print and Mail Services, engaged employees in a technology change. Chambers developed a plan with staff that defined how they wanted the new equipment to perform and how they could improve on the existing equipment. Chambers and staff attended Print 17 and visited three vendors, bringing their own paper and the same problematic files on each visit. This process allowed staff buy-in, especially with the operator of the current equipment.

“I highly recommend that, to get staff buy-in, to let them participate in the decision,” stated Chambers.

After taking over a shop with digital equipment that was literally duct taped together, Michael Czerepak, manager of University Printing at the University of Delaware, knew listening to employees and figuring out what the core of the business had been were the most important aspects for bringing in new technology. 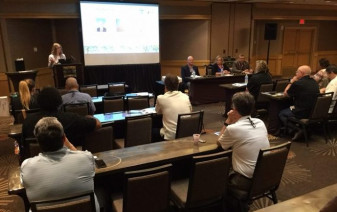 “I had access to numbers and I had access to some history, but, they're the ones that are working with the equipment,” he said. “They're the ones that are seeing most of the jobs. Sit down and really listen to them. And they had some really great insights.” Using this process, the in-plant solved a signage pinch point that has allowed it to increase its signage business by about 400%. This is now a huge money generator.

All three panelists have an annual business plan. Additionally, Orange County Public Schools and Alfred State College also use a number of business management tools, including a SWOT analysis.

Orange County also has a five-year strategy and objectives, and measures how the in-plant is performing monthly and quarterly relative to the objectives. The in-plant also uses a continuous improvement vehicle called plan, do, check, act (PDCA).

“I think what's really important is our reviews,” said Reed. “So, by the time we get to the end of the fiscal year, there shouldn't be any surprise. It's that ‘how’ part inside the objectives of how we're going to achieve those numbers and measure it that makes it really a 360-degree success from a business management standpoint.”

Chambers emphasized the importance of not just “measure what you manage, and report what you measure,” but also making sure that what an in-plant manager reports to the supervisor and leadership team is what they want to hear.

“You need to use the data that you collect to manage your people, your purchases, your services, and to help you with planning,” Chambers said.

University of Delaware looks at the human side of the equation to balance operations versus production to manage the shop. Czerepak has found that constant and facilitated communication between production staff and the operations staff is key.

“Nurture a welcoming environment,” he said. “Give operations and production staff the tools and the knowledge not only to perform their job, but to understand their fellow colleagues, and that sort of environment will come into its own. I've seen results.”

Workforce Change Management and Burning Everything Down

All three leaders have driven a tremendous amount of change in their organizations. Reed found that his in-plant needed to add some staff in addition to changing some of the staff. The operation had been focused on production, but not on the business side. It added quality assurance and finance positions to help the shop focus on business goals, enabling the production team to focus on production.

In-plants filled the room for the panel discussion.

Chambers talked about planning changes before the changes are made using “What if” terms, such as “What if we can’t afford a certain piece of equipment?”

“When communicating a change to your staff and then to your customers, the best way to do it is to state the change and then state how that change is going to affect that person, that team, and then how it's going to impact the organization,” Chambers said. “Why is it good? Why is it necessary? And then restate the change again.”

After joining the operation, Czerepak felt it wasn’t prudent to shake up the system right away. He took some time to meet staff, gain their trust, and learn about the school, formulating short and long-range plans for the changes he saw that were needed.

“Occasionally, it's appropriate to burn a system down and begin anew,” Czerepak elaborated. “After these two years, we've learned the systems and now we're breaking them down and starting fresh in a lot of situations. At this point, my employees are starting to see the benefit. We're seeing results from our clients saying how much more efficient they seem to be. So, the change is working. Start slow, burn everything down.”

Chambers’ operation reports to Admissions so she can directly demonstrate relevancy to the college through the in-plant’s contribution to student recruitment. Due to Chambers’ monthly and annual reports about the in-plant’s admissions and fundraising contributions, she has created visibility with the college’s president, who recently asked Chambers how her equipment was running.

Reed describes relevancy as “simply adapting to an ever-changing landscape.” Reed highlighted not just adapting to customer and market changes to proactively remain relevant, but also the need to stay relevant with staff. He noted the need to continue to train, reinvest and take care of staff first and foremost. “I know without a doubt that regardless of the equipment that we have or the size of the building, no matter how big or small it is, no matter what tool we use, none of that matters unless we take care of our people.”

Because the University of Delaware does not have the right of first refusal, Czerepak defines daily what his operation’s relevancy is to the university, using three approaches. First, he is willing to create jobs at a loss to differentiate the in-plant from local competition, putting in extra time on jobs to satisfy customers. Secondly, they are brand champions, which benefits the university and endears the in-plant to the marketing department. Lastly, Czerepak encourages others to be visible.

“I make a point to go to everything. Any time I hear of a meeting, I go to it. I bring samples. I bring cards. I bring magnets,” he said. “So just get out there and look people in the eye and don't give them an excuse not to print at your facility.”

Elisha Kasinskas is Rochester Software Associates’ (RSA) award-winning marketing director. She is responsible for all marketing, public relations, social media and communications, and community building for the firm. Ms. Kasinskas joined RSA in 2010. She is a marketing veteran with more than 20 years of experience in sales, product management and marketing in leading product and service business-to-business and business-to-consumer firms, including Pinnacle (Birds Eye) Foods, Level 3, HSBC, and a number of regional high-tech firms. She holds an RIT MBA and a BS, Marketing from Radford University. Kasinskas is a frequent moderator for industry speaking sessions, an in-plant blogger, and has received industry awards including the IPMA Outstanding Contributor award. She was an OutputLinks Women of Distinction class of ’15 inductee. Her marketing work with IPMA has secured multiple awards from the American Marketing Association (AMA).