Shortly after the IPMA Conference in June 2019 we reported that the state of the industry was strong. This was based on the preliminary data from the IPMA 2019 survey sponsored by Canon entitled “The Next Generation Tactics and Strategies for In-plant Service Providers.”

The next obvious question is what new products and services will be fueling this growth over the next few years. As you can see below, when respondents were asked what they would like to offer next, the #1 answer was inkjet production printing (29%), followed by promotional products (27% ), and apparel printing or personalizing sewing (hats and shirts). 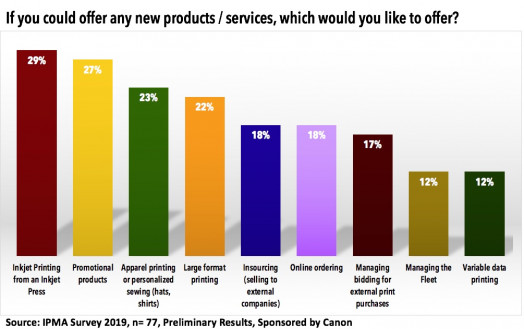 However the high response rate for promotional products, apparel printing and personalizing sewing was surprising. Not because no in-plants offer it, because we have seen successful sales at the University of Nebraska-Lincoln, HealthSouth and the University of Virginia. The suprise was that these products have been declining in recent years. Perhaps this success in these other in-plants has not gone unnoticed, prompting the renewed interest.

The data presented was preliminary based on 77 responses. To the see the final executive summaries of the report join us at Printing United at my session “Next Generation Tactics and Strategies for In-plant Service Providers” taking place Oct. 24, 11:00 - 12:00 in room C144.