I have been actively focusing on in-plant printing operations for over a decade and was pleasantly surprised when In-plant Graphics asked me if I would be interested in joining its new team of bloggers. Although I have blogged for the Graphics Arts Monthly, WhatTheyThink, NAPL and other sites, this is the first time I will be focusing exclusively on my observations and experiences with in-plants. My experiences with in-plants have been some of the most satisfying work (when they thrive) or frustrating work (when they close). I have always considered benchmarking and improving performance a best practice to prove an in-plant’s value.

One of the keys to improving performance is streamlining your workflow. That is one reason I recently joined Integrated Methods Group (IMG), a company that focuses on workflow and was founded by software automation pioneer Dave Zamorski. He was first recognized for his contributions to workflow automation after winning the CIP4 International Print Production Innovation Award in 2008.

When digital presses and digital production workflows first appeared, the process was slow and cumbersome. As a result, everyone’s initial focus was to streamline each step of the process, creating what are now called “islands of automation.” In other words, how can I automate estimating, customer service, prepress, pressroom and postpress processes? Here is a slide from 2006 that shows the old and new workflow goals: 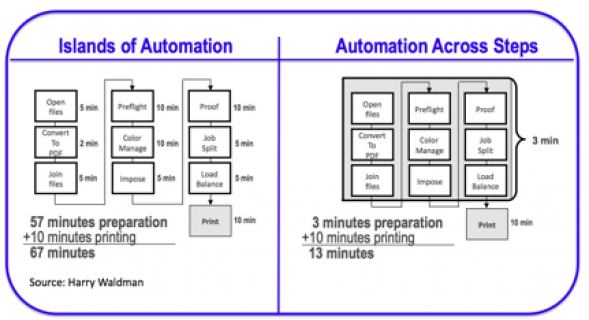 Short-Staffed: How In-plants Are Coping With Vacant Positions