Technology Trends from the InfoBlog
May 11, 2016

What Was Trending at Dscoop San Antonio

I attended the recent Dscoop Americas event in San Antonio and was struck by a few trends:

Value-added special effects — One of the fascinating things that HP did in its Dscoop exhibit floor space was to display some special effects that its R&D labs are working on which may or may not be implemented someday on the Indigo platform through the use of the fifth, sixth, or seventh imaging stations. The intent of showing these was to get feedback from attendees on the concepts, each of which provides some value-added feature. The concepts included fluorescents, phosphorescents (glow in the dark), thermochromic, silver, scented, adhesive, glitter, chameleon, lenticular, expanding, gloss, invisible, and taggant.

Attendees could vote on which effects they were most interested in. For those who want something now, HP has recently introduced a new more opaque white for Indigo. This white will require fewer hits to get the desired opacity. Speaking of value-added special effects, Scodix showed some beautiful examples combining dimensional and foil. (For more on Scodix, see the InfoTrends blog entitled "Pre-drupa: Israel’s Scodix Rolls Out Speedy, B1-Sized Digital Enhancement System." For more on HP’s Indigo news, see the InfoTrends blog entitled "HP at drupa 2016: Re-Imagining Production Digital Printing.") 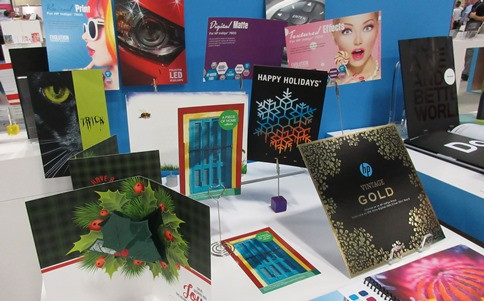 Digital laser cutting — The second-day keynote speaker was Kevin O’Leary (of "Shark Tank" fame). As part of an engaging presentation he mentioned, Lovepop, a company that received venture funding from him. Founded by two marine architects, Lovepop creates marvelously intricate pop-up greeting cards from delicately cut paper. O’Leary described how the current process, which involved production in Korea, had the potential of being automated. Lucky for O’Leary, there were three companies talking about laser-cutting on the show floor. Two were handing out samples (Highcon and LasX), and a third, motioncutter had a device running on the show floor. (For more on Highcon’s news, see the InfoTrends blog entitled "Highcon Ramps Up: Lots to Show at drupa 2016.")

PrintBeat will be the heart of PrintOS for HP Indigo users — Not far into the session on PrintOS (HP’s Cloud workflow initiative) it became clear that the prime reason, the hook if you will, to interest the Dscoop community in signing up is going to be PrintBeat. For those who aren’t familiar with PrintBeat it’s basically a performance dashboard for Indigo and other HP devices. PrintBeat reports have been e-mailed to Indigo customers on a weekly basis, but now with PrintOS, customers can have on-the-fly immediate access to this data. There’s a lot more that will be built into the PrintOS ecosystem, but for Indigo users, PrintBeat will be a big part of it. It’s also clear that tools like media locators and paper profiling will become even more valuable with the accessibility that PrintOS on a mobile device will bring. 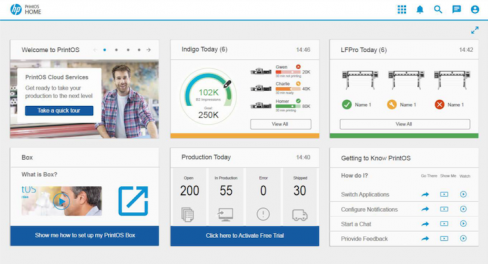 The overlap of inkjet and electrophotography — I was at Dscoop to moderate a conference session called "Finding the Right Application Fit." My intent was to bring together a panel of users who owned HP Indigo and Inkjet (now PageWide) Web Press units. I wanted to explore the overlaps between the two technologies: liquid electrophotography and aqueous inkjet. The panel included Bill DeAngelis of Allied Printing, Michele Brennan of Bridgeport National Bindery, Paul Gardner of Hudson Printing, and Paul Houde of Transcontinental. Across a range of applications (from books to direct mail and commercial print), each speaker weighed the advantages of each technology in terms of run length, substrates, area coverage, running cost, finishing, automation, and other factors. There is a lot to be learned from these users. As more inkjet products enter the market, including cut-sheet and roll-to-sheet designs, there will be increasing application overlap, some of which will drive up economic and competitive pressures between the two technologies. High-coverage designs printed on glossy coated stocks will continue to be a challenge for inkjet for some time to come for technology and economic reasons.

Print in 8 — Dscoop board member Gary Peeling floated an interesting idea during one of the keynotes. It’s called "Print in 8." (The idea being that print could be delivered anywhere in the world in eight hours.) Peeling envisions a global network of 10,000 Dscoop members using PrintOS workflow tools like Box and SiteFlow to deliver high-quality print jobs to clients in a highly creative, collaborative, automated, and consistent fashion. And not just limited to documents, but also labels, packaging, display graphics, and even 3D print. It’s just a concept for now, but keep an eye out for this as PrintOS develops.

Free membership — Dscoop has altered the way that it funds its mission through members. Previously (in addition to sponsorships from HP and other Dscoop partners), entry into Dscoop required a membership fee (around $600 in North America). That now has been waived. Instead members are charged for conference attendance (which for the most recent Dscoop was around $1,200, though discounts were possible). It’s all part of a reassessment process that the Dscoop board has been implementing over the past year. Dscoop notes that by eliminating the membership fee it will be able to engage and attract more print service providers to its events and to increase overall participation by member companies. 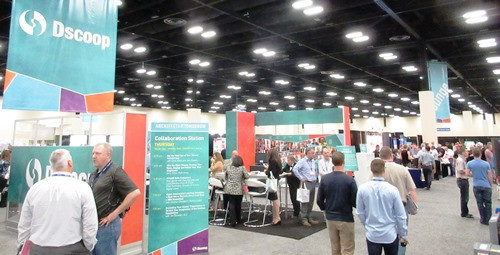 There was a lot more to Dscoop than the few items I’ve described above. Dscoop continues to be a unique event with much to offer the HP user community, particularly for Indigo users. Plans for more local or regional Dscoop events, as well as support for educational initiatives were also part of future plans. For now, Dscoop members can look forward to Dscoop 2017 (March 2-4, in Phoenix) but there will certainly be more Dscoop news before then.

InfoTrends is developing a research study to explore value-added special effects. If you are interested in hearing more about this study please contact me.

Pantone Introduces Its 2023 Color of the Year
END_OF_DOCUMENT_TOKEN_TO_BE_REPLACED