Your Lobby: The Place Where the 'Fire' is Kept

Tricky Beam, on the left.

They called him “Tricky Beam.” He was my great uncle. He was a schemer. He earned his name “tricking” people out of their money.

His father passed away when he was in his early twenties and left him about 80 acres of valuable real estate. In order to supplement a drinking habit, he sold off the land in one- and two-acre lots. His trick was to sell the same plots of ground several times over. It is estimated that from his original inheritance of 80 acres, he sold approximately 560 of them.

Dear old Uncle Tricky certainly had his own way of doing things.

Another story told about him involves the manner in which he kept his house warm during the winter. It seems he didn’t believe it was necessary to actually cut up his fire wood.

“Why cut it when you are just going to burn it?” he was known to say.

Instead of chopping wood into manageable pieces, he would open the front door and a rear window, hook up a team of horses behind the house, and drag an entire tree trunk into the foyer. He placed one end of the tree into the fireplace and left the rest of it on the open floor. As the fire burned, he would maneuver it, little-by-little, into the burning coals. Often, the tree he was burning was so large, it extended through the foyer and out onto the front porch. People would walk by his house in the middle of winter and see the door held open by a smoking, 12-foot, bark-covered log.

Tricky must have known the term “foyer” was an old French word, and it literally meant “the place where the fire is kept.”

The foyer of a home has a long history of usefulness. It wasn’t always just a small space utilized for hanging coats or passing through. In our offices, we call this space a lobby. The building that houses the College Press in-plant where I work has a lobby. It doesn’t have a fireplace, but we like to think of it as the place where the fire is kept. That is, if you consider the “fire” of an in-plant the energy source that keeps it burning.

What is that energy source that keeps an in-plant burning? Is it the customers? Is it the people who work there? Is it the work itself? Or is it the mission of the parent organization?

Whether you call it a foyer or a lobby, the entrance way to your facility should tell all who enter there the story of what happens in your building. It needs to be more than just a “through way” into the in-plant. The lobby should be warm and welcoming. There should be an employee seated there, greeting people as they enter. There should be mints or candy available for guests. It should be kept clean and well lit. It should house all of your awards. There should be pictures on the walls showing visitors what you do and who the people are that work there. There should be displays showing actual examples of your work. Above all, it should be freshly painted and it should look like anything other than a stereotypical noisy, dusty, dirty print shop. 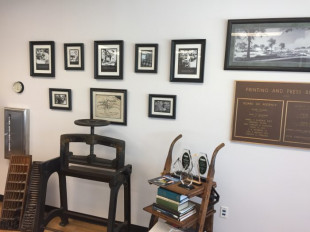 I recently had an opportunity to see the in-plant at the University of Texas in Austin. If there was an award for what an in-plant lobby should look like this shop would win it. The space was open, fresh and inviting. While there were several antiques on display representing the history of printing, everything about the lobby seemed to say “Welcome to the Future” and “This is What We Do Here.”

To my left there was a large television screen showing live video of the in-plant’s five-color Komori press. It was mounted above a display of Longhorn merchandise on a wall painted in UT burnt orange. Around the corner I could see a glass-enclosed client meeting area. To the right was a poster showing a picture of director, Richard Beto, receiving his latest IPMA award. 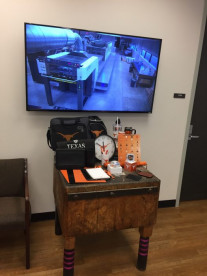 Just beyond that was a wall covered with awards and a door leading into the production area. There were strategically placed tables displaying more awards and publications and, on one wall, framed prints of current and past employees. And, directly in front of me, was a service counter where a warm, smiling, friendly employee greeted me.

I was there for a tour but if I had a printing order I would have felt extremely confident I was entrusting the right people with my work. 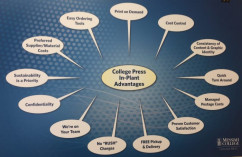 At my in-plant at Messiah College, we have a Customer Promise Statement displayed in our lobby as well as a beautifully designed, easy-to-read graphic that communicates the value of the in-plant business model. We also have a glass display case showing some of our printed samples, some print artifacts and a few awards we have won.

What about you? Tell us about your lobby area. How are you sharing the story of what you do in this very important customer space? Please share your comments in the comments area of this blog.

Dwayne Magee is now in his 17th year as director of Messiah University Press and Postal Services. His department was recipient of the 2018 IPMA Organizational Impact Award, the 2015 IPMA Innovation Award, the 2017 ACUP Green Service Award, and the 2015 ACUP Collaborative Service Award. Prior to joining Messiah, he worked for 17 years at Alphagraphics as an assistant manager and ISO coordinator. He is president of the In-plant Printing and Mailing Association. He is currently an English major (part-time) with a concentration in writing at the college where he works. Outside of work, Dwayne enjoys exploring spiritual, environmental and social concerns through creative writing and the arts. He can often be found speaking on the topic of diversity in bookstores, public libraries and elementary schools, where he makes use of his award-winning children’s book “A Blue-Footed Booby Named Solly McBoo.” His travel writing and fictional essays have made appearances in various publications including the Northern Colorado Writers Anthology and the Goose River Anthology published by Goose River Press. Dwayne is the father of two boys and he resides in Mechanicsburg, Pa., with his wife Sue and their two dogs. Contact him at: DMagee@Messiah.edu

Market Your In-plant … Or Fade Away

Here Are the Winners of In-Print 2022
Comments
Happening Today
Production Inkjet: A Smart Choice for Education