As the third largest school district in Texas, the Cypress Fairbanks Independent School District (CFISD) has more than 117,000 students across 91 campuses consisting of 56 elementary schools, 18 middle schools, 12 high schools and five special program facilities. The Houston-based district has more than 16,000 employees and is the only district in the state to be ranked in the top three most effective and efficient districts in Texas by the Education Resource Group for each of the last six years. 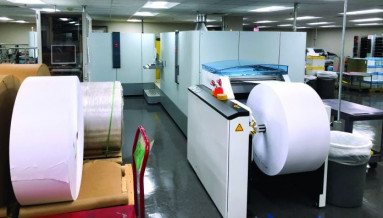 At CFISD, administrative expenditures account for only 1.8% of the operating budget. For a district of this size and caliber, CFISD’s printing resources are a critical asset. An efficient print shop can deliver both significant value to the district as well as contribute to a better bottom line.

That’s the mission that Derrek Thompson, Print Center Manager for the district’s Janie Scott Print & Production Department, has undertaken since he joined the organization 10 years ago. “For a district this size,” he says, “we have quite a small department with only 12 employees. But we deliver a huge amount of printed material to the district with this talented staff.”

The district has six toner-based printers/copiers and four small offset presses. “Our problem was that our finishing department couldn’t keep up with the output from our copiers and presses,” Thompson explains. “We would have pallets of paper sitting around waiting for finishing, and we often had to outsource work to meet deadlines — in fact, as much as $250,000 worth of outsourcing annually. We knew we needed to take action to continue to do our best to serve the needs of the district.” 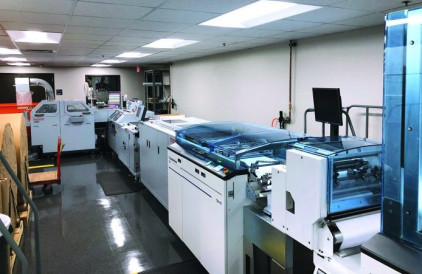 Thompson and his team determined that a roll-fed inkjet press with in-line finishing would be the best solution to their dilemma. “We looked at solutions from three different printer vendors, who all basically recommended the same inline finishing choices. Ultimately, we decided to go with the Canon Océ ColorStream 3900 digital color printing system. And since we had already had a Horizon StitchLiner 5500 Saddlestitcher for some time — and had very good experience with it — we chose to work with Standard Finishing and Canon to configure an in-line solution that would best meet our needs.”

CFISD installed a Standard Hunkeler/Horizon roll-to-booklet line last April along with its Canon 3900. The solution begins with a Hunkeler unwinder into the Canon inkjet press. Printed output is delivered to a Hunkeler CS6-HS cutter equipped with vertical perforation capabilities, and then into a Horizon StitchLiner 6000 digital saddlestitcher for final finishing. Houston-based Standard dealer LSS Digital seamlessly installed the Hunkeler and Horizon components of the system and now provides ongoing maintenance and service for the front and back ends of the line. 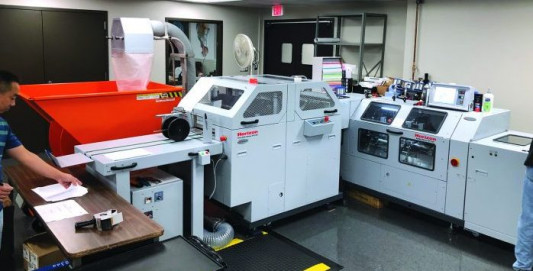 “Although it has only been five months since installation,” Thompson says, “the results have been dramatic. We have virtually eliminated outsourcing, and operation of the line only requires two people instead of the three or four we required before. Now at least half of our work goes through that line, basically paper in and finished booklets out. As an example, one recurring job we do used to take us 54 hours to complete. Now we get it done in nine hours!”

He adds that since the system got up and running, it has basically run itself, with two people taking finished product off the end of the line, boxing and labeling it, and getting it ready for distribution. In this more productive working environment, morale among the staff has skyrocketed.

“We just got through the school year start-up,” Thompson says, “and historically that time period has been extremely stressful for us. This year, with our new Canon/Hunkeler/Horizon line, staff is working at 100% instead of 110%, everything is calm, and it doesn’t seem like a rush. The troops are much happier, and this is a much more pleasant place to work. Not only have we saved the district money by virtually eliminating outsourcing, we are meeting our deadlines. But for me, the improvement in the work environment for my hardworking team is the biggest plus of all.”