Outsourcing print work breaks the flow of business in an in-plant and takes away from the bottom line. With Curtis Ebdon’s decision to install a six-station Xerox Iridesse production press in Fairfield University’s in-plant, he placed his faith in a new device that could do more, and brought more work to the table as a result.

“The more we can do in-house, the more we save the university, the more control we have on the project, and the faster we can turn it around — very simple,” he says of the decision to replace the school’s Xerox Color 1000 with the Iridesse.

The Connecticut in-plant, which has 10 employees and does approximately $2 million in sales per year (excluding externally printed jobs), was one of the very first in-plants in higher education to obtain an Iridesse. It was installed on Halloween of 2018 — a delightful treat indeed.

The high-speed, six-station digital color press combines four-color printing with up to two specialty dry inks in one printing pass. It can print metallic gold or silver dry ink, CMYK and clear dry ink in a single pass. Printing at speeds up to 120 ppm, the press can run stocks from 52-400 gsm. 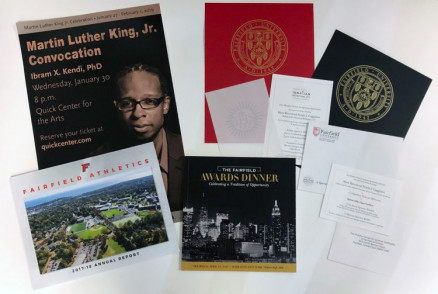 Samples printed on the Xerox Iridesse at Fairfield University.

The Iridesse, which the university leases, allows Fairfield to creatively expand its print pieces with the white, gold and silver toners, but the digital press’s increased speed, quality, larger paper size and sharper image quality were what really drove the decision to obtain the machine. Plus, Ebdon says, the interface is very user-friendly, which has been a refreshing change from using a third-party interface. Xerox FreeFlow Core’s pre-built workflows enable Fairfield to automatically and selectively transform text and graphics for printing gold and silver without editing the source documents.

“We have used the clear with the 1000, so this is not new to us,” notes Ebdon, senior director of the Design and Print department.

The in-plant has used the Iridesse to produce invitations, programs and other materials for awards dinners and university events. With its specialty dry inks, the press can enhance these pieces, creating a copper look, for example, by overprinting silver with CMYK. For an awards dinner invitation and program, both gold and silver specialty inks were used.

Ebdon says the shop has yet to use the dimensional feature to print a textured effect but plans to put this to use with the school’s orientation materials this year.

Besides the Iridesse, the in-plant also added a Xerox Versant, a Morgana DigiBook 200 perfect binder and a Duplo DC-616 Pro creaser/slitter.

“We had an increase in color with a reduction of black and white,” Ebdon explains. “We eliminated the Nuvera from our black-and-white production, but we still have the [Xerox] D110. Having two color production presses gives us insurance to still print in-house if one goes down. With the combination of the Iridesse and the perfect binder, we are bringing in an additional $100,000 annually that was [previously] outsourced.”

It was quite easy to have management sign off on a new lease, explains Ebdon.

“We presented it as a replacement based on age and breakdown of the 1000. We did not have to sell the extra bells and whistles the Iridesse offers. The extras were a bonus ‘wow’ factor to those that appreciate quality.”

The in-plant plans to show off its new capabilities during an open house in April.