At one of the most successful In-plant Printing and Mailing Association (IPMA) conferences in recent history, consultant Howie Fenton reported his preliminary data from the ongoing IPMA 2019 survey. The survey, sponsored by Canon, was presented to more than 200 people on the first day of the conference in Louisville, Ky.

Named “The Next Generation Tactics and Strategies for In-plant Service Providers,” the survey included more than 40 questions that focused on: shrinking traditional and growing value added services, hardware and software purchase intentions, successful marketing and sales tactics, issues of staffing and workflows, and best practices of metrics and reporting. The presentation discussed answers from 77 in-plants but 30 more surveys are needed. To be included, click this link.

Fenton opened the presentation by describing the data as some of the most optimistic data he has even seen from in-plants in decades. Two of the most impressive results were financial. 81% of respondents reported they met their financial objectives last year and 12% said they were within 5% of meeting their goal.

Combined that means that 93% of in-plants met or where close to meeting their financial objectives. Even more impressive was that 60% of in-plants reported that they met their financial objective in the last five years in a row, and 21% reported they met their goals three or four  times in the last five years. 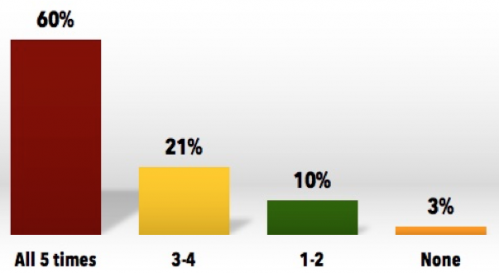 In the last 5 years how many times has the in-plant met its financial goals?

Fenton added that additional encouraging news was reported about sales and budgets:  41% reported they remained the same, 39% said their sales/budgets had increased and only 11% reported a decline.

Three New Challenges of the New Normal
Reopening Of America: What Will This Look Like For Businesses Across The US
END_OF_DOCUMENT_TOKEN_TO_BE_REPLACED
Upcoming Webinars
Planning Ahead to Address Paper Supply Challenges