Surviving And Thriving in Pueblo

Having successfully rebuilt after multiple floods and survived a potential closure after an outsourcing scare, Pueblo City Schools’ (PCS) Document Services Center is sailing strong thanks to a dedicated and seasoned staff and an efficient, automated workflow.

Led by Supervisor Mary Bocchietti, who started at the shop as a student intern in 1998, the Pueblo, Colo., in-plant’s staff of three full-timers and three part-timers produces a broad range of work, including support documents, wide-format printing, yearbooks, marketing materials, banners and student activity materials. The bulk of the work the shop produces is instructional materials, workbooks and daily lessons.

“Our order completion efficiency is our strongest asset, thanks to Print Shop Pro,” Bocchietti says, speaking of the shop’s Web-to-print system from EDU Business Solutions. “Customers often submit regular, simple copy jobs online at 10 p.m. and we have them on the delivery truck at 8 a.m. Our standard turnaround time is 24 hours.”

There are nearly 18,000 students served by 33 schools at PCS: 16 elementary schools, four middle schools, three K-8 schools, four high schools, two magnet schools, three charter schools and one alternative school. The Document Services Center also took over printing responsibilities for rural District 70 in 2008 after the smaller district of 9,500 students did away with its in-plant. 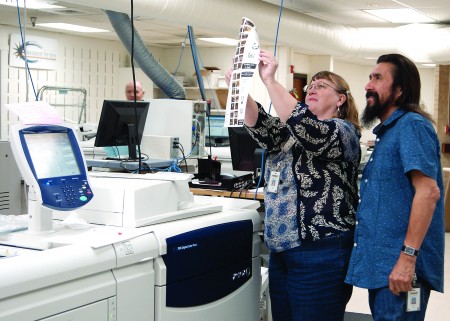 Renee Hahn and Roman Aragon check a proof printed on the Xerox DocuColor 700.

The start of the school year is traditionally a busy time for anyone involved in education. That is no different for Pueblo City Schools’ in-plant. However, Bocchietti points out that the schools in the district have different start dates. Some schools begin in early August; District 70 opens in mid-August; and the rest of the schools start at the end of August.

“This actually helps us out greatly because we were slammed for the week or so before each of the start dates but we got over our back-to-school crunch by mid-September, which was much sooner than years past when we had one traditional start,” Bocchietti notes.

The shop had been the victim of several small floods over the years. Then, in 2009, three feet of water engulfed the shop when a water main broke next to the administrative building that houses the in-plant. Questions regarding the survival of the shop arose, and work had to be outsourced to FedEx Office and local commercial printers while the in-plant was under water.

After experiencing the slower turnaround times and higher costs of outsourcing, the district really came to understand the value the in-plant brought, Bocchietti contends. The memories of this outsourcing experiment also allowed Bocchietti to quickly stop an attempt to outsource student workbooks to Office Depot a few years later. 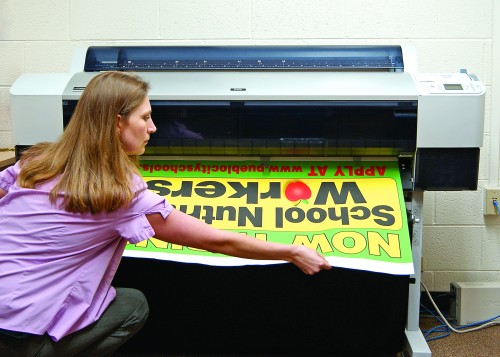 “In 2011, we got hit with another flood, with about a foot of water,” Bocchietti recalls. “At that point there was no question that we would be back, in our same location. We knew what to do to get back up and running and get back to work as soon as possible.”

Bocchietti maintains that the dedication of the in-plant’s staff was a key to the shop’s survival.

“We say that if we can do it, let’s do it, and do it with a good attitude,” Bocchietti says. “If they expect us to turn around a job in two hours—good. Our employees come to work for more than the paycheck. They get excited to get big orders, and to see the work go out on time.”

Ken Barton prints a black-and-white job on the Xerox Nuvera 100.

The in-plant operates using a mix of digital and offset equipment, allowing it to efficiently produce a variety of jobs, including diplomas using classic linen cover pearl white stock.

“We have a yearbook program for elementary and middle schools,” Bocchietti adds. “We provide schools with a template and six choices of yearbook size and color. That allows them to customize their cost as low as $2.50 per book to help all students receive a yearbook. This is especially important because 50 percent of our district is low-income.”

The shop purchased Print Shop Pro in 2009, right before the major flood. The floodwaters delayed the online ordering system’s launch until May 2010.

“That capability alone is what makes us so efficient,” Bocchietti contends. “At one point we had 11 full-time employees, and now that we