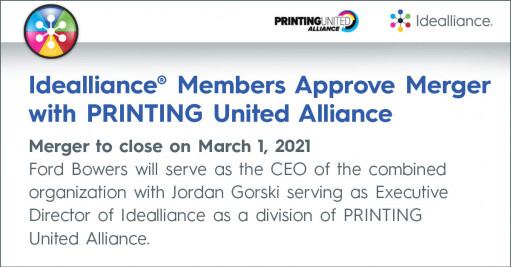 PRINTING United Alliance and Idealliance announced the intent to merge the two organizations earlier in January. The proposed merger was approved unanimously by each Board of Directors to be followed by consideration of Idealliance members at a meeting of active members today, in accordance with Idealliance Bylaws. Idealliance Members overwhelmingly approved the Plan of Merger with 96% voting in favor, which serves as the final step to effectuate the merger.

Dick Ryan, Idealliance CEO said, “The traditional segmentation of print providers has continued to blur and converge, which the shifts in digital printing technologies have accelerated. Over the past few years, PRINTING United Alliance has built an association that addresses all the major segments through expanded membership, an array of events, and industry leading media brands, bringing considerable resources, marketing reach and audiences under one roof. At the same time, Idealliance has developed the expertise to build and rollout not only its traditional color management programs, but new standards training and education on a global platform. This is the right strategic move by Idealliance to better serve the graphic communication industry.”

David Steinhardt, Idealliance Managing Director, and former CEO for nearly twenty years, said, “Idealliance has always looked to the horizon to see the next strategic shift and to take the practical and tactical steps to stay ahead of the curve. Pairing the two considerable and complimentary portfolios of Idealliance and PRINTING United Alliance will benefit each organization and the industry, from brands and print buyers, to print service providers, to suppliers and manufacturers. Together they will truly be greater than the sum of their parts.”

Ford Bowers will serve as the CEO of the combined organization with Jordan Gorski serving as Executive Director of Idealliance as a division of PRINTING United Alliance. Idealliance will become an “association within an association” with its own membership base and defined separate programs and services. All Idealliance staff will continue as part of the combined organization; however, Dick Ryan, CEO, and David Steinhardt, Managing Director, will depart. In addition, two of the current Directors serving on the Idealliance Board of Directors will serve on the PRINTING United Alliance Board of Directors going forward.

The proposed merger of the two organizations will be finalized on March 1, 2021.

Become a member of Idealliance at https://idealliance.org/membership/

Explore the History of Signs in This Infographic