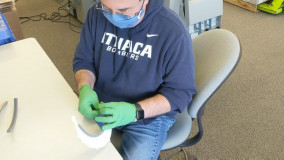 “It [started] when it was first announced by Governor Cuomo that they needed private companies to make PPE because there are such shortages,” Harris explains. “I think we were all inspired at the same time.”

Developing personal protective equipment (PPE) has not only allowed the operation’s employees to keep working but has benefited various companies, including local hospitals, nursing homes, and juvenile detention centers.

And while demand continues to grow, the biggest challenge remains in sourcing supplies for the PPE. 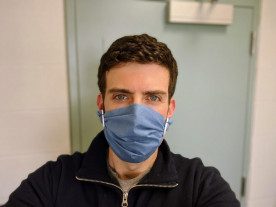 One of the face masks produced by the in-plant.

“We basically had to make PPE from print shop consumables,” Harris says. “The biggest hurdle [was the] fabric for the masks. We found a supplier that had rolls and rolls of this SMS material. Elastic is super hard to find right now, so I had the idea to order braided elastic men’s belts, cut the ends off, and unbraid them. And then you get lots of useable, cheap elastic.”

Beyond sourcing the PPE materials, developing a design proved to be challenging for the in-plant, as well. After producing several prototypes, the operation chose the design that seemed to be the most universal.

“The [correct design] resolved needing two pieces of elastic, and we wanted to use as little elastic as possible,” Harris says. “It’s also adjustable and has the least amount of material. I think it’s the most user-friendly fitting. Fitting a mask to many faces, making it universal, is very difficult.” 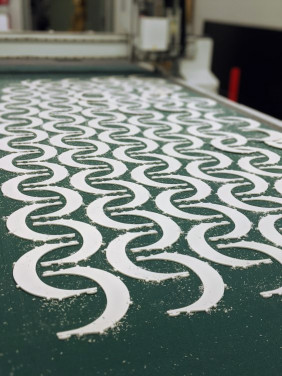 Face shield visors being cut on the Colex cutter.

So far, The Center for Print Production has developed 21,000 masks and just over 7,000 face shields.

“[Production] has actually lasted longer than I thought it would because I [thought] supply would catch up with demand, but it doesn’t appear so yet,” Harris remarks.

The operation will continue developing PPE as long as it’s needed. According to Harris, the in-plant is planning on working with a local company that assists adults who are having a hard time entering the workforce.

“We’re trying to transition [production] over to them,” Harris says. “We’ll cut everything, but then they will assemble everything.”

The Center for Print Production recently received an award for its PPE development from a local company.

“It was from a local credit union,” Harris explains. “They were giving out an award for people that helped out with [PPE production]. They gave us a $500 cash award, which we then put back into making more PPE and donating.” 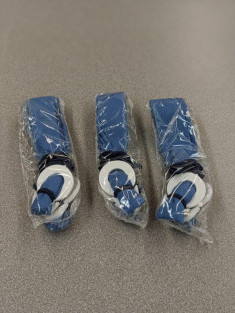 Harris encourages in-plant printers to use their resources and do what his in-plant is doing. Even if they don’t have a cutter, there are other ways in-plants can get involved in PPE efforts. But Harris attributes much of the operation’s success with PPE production to his staff.

“We’re very fortunate to have a great staff that just kind of rolls with the punches,” he lauds. “We actually had two members of [Ithaca College] staff … that were furloughed, and they really wanted to work. So we arranged for them to work here.”

And while the work can be difficult, Harris commends his team for the time they spend on developing the PPE. 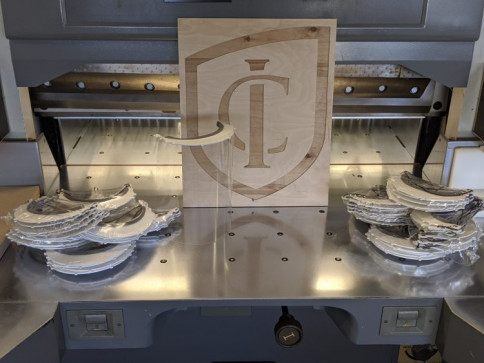 “We [even] have a facility worker who makes about 100 masks an hour. She’s a machine,” he praises. “It’s very time-consuming and tedious work, but they’re champs.”

Related story: Doing It All in Ithaca