Since adding a new flatbed UV printer, Toledo Public Schools' in-plant has been very busy printing signage and other items for the school district’s 53 schools and more than 23,000 students. 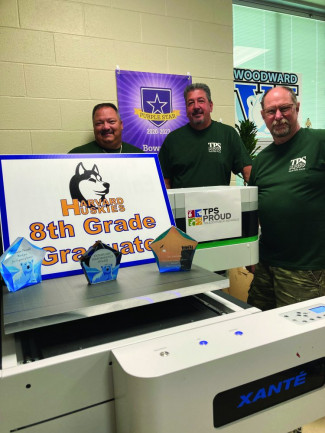 It has been a tough year for schools everywhere, but things are looking up as students prepare to return to school in person this year, including students at Toledo Public Schools in Toledo, Ohio. This school district has another reason to celebrate as well: its in-plant has boosted its print capabilities with the acquisition of a new flatbed UV printer.

The Duplicating and Mailroom Services team of five provides printing for the district’s 53 schools and more than 23,000 students. With the new Xanté X-33, the in-plant will be able to offer a range of added benefits beyond its bread-and-butter print products. Since its installation in February, the machine has already come close to paying for itself.

“It’s been keeping us pretty busy,” affirms Print Production Manager Cathy Prala, who initially viewed a demonstration of the X-33 at the 2019 Association of College and University Printers (ACUP) conference. The UV LED machine can print onto a variety of media, and has an image area of 36x24˝, an ideal size for the in-plant’s requirements.

“We looked at Mimaki models as well, but they were either too small or very large,” says Prala, “There wasn’t a whole lot of options for ‘in-between’ sizes previously, so I nabbed this one as soon as I was able to.”

Another major attraction of this particular model was its ability to print on media up to 6˝ thick. And while the in-plant has been enjoying getting creative with the X-33 — such as printing directly onto golf balls — Prala had her sights set on one particular application when she first encountered the machine.

“My main goal was to be able to do yard signs,” she reveals. “I wanted to capture that for the district. It installed at the end of February of this year, and since then we’ve done over 1,000 yard signs for graduations and other events. There was a large push, especially for the elementaries, to try and keep the students feeling included, and there were initiatives like ‘Student of the Month’ to keep some positive motivation going as we try to get through this.” 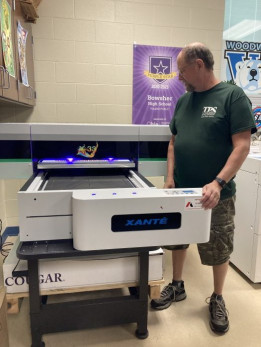 To justify the investment, Prala spent time reaching out to the high schools in the district to determine how much they were spending externally just on yard signs.

“What I found was they were spending a really exorbitant amount of money for 100 yard signs with a lower quality than the ones we are able to produce, because we print on Coroplast, rather than cardboard. I was able to justify not only quality-wise, but cost-wise, saving the district money. And turnaround time was another big factor, as we were able to do 200 yard signs within a day or two.

“We started letting them know that we can put the students’ names on the yard signs,” she continues. “We are bringing in some of the variable data to be able to personalize it a little bit more. I told them we can have this paid for within two years, and now I think it will be one year.”

The in-plant has also been able to use the Xanté X-33 to produce poignant awards to honor those that went above and beyond during COVID: helping students who were having difficulties with the pivot to virtual learning, for example. The 1˝-thick acrylic awards have a 3D-effect for a special, high-quality feel.

“We were able to print onto these awards with the Xanté, with different shapes and effects,” Prala points out. “The machine is pretty limitless in terms of what you can print on, and it doesn’t have to be a specially treated material like we do with sublimation. This doesn’t have to have any of that, so we have a lot more options.”

Though the Xanté X-33 is staying busy, Prala is working on a plan to better inform the school district about its potential.

“Anytime we can get within earshot of somebody, we self-promote,” says Prala. “I’m putting together a digital storefront [WebCRD from Rochester Software Associates] at the moment, and so hopefully, once we get that up and running, I can advertise that way and get some of these products up on the storefront — that’s a work in progress at the moment.”

The popularity of the yard signs combined with the in-plant’s ongoing experimentation with innovative applications, have created quite a buzz at the district, and made the Xanté X-33 an ideal “welcome back” gift for the hard-working teachers, staff, and students of Toledo Public Schools.

Three New Challenges of the New Normal
Reopening Of America: What Will This Look Like For Businesses Across The US
END_OF_DOCUMENT_TOKEN_TO_BE_REPLACED
Upcoming Webinars
Ignite Profits and Customer Satisfaction