Paul Wanningman has brought printing and peace of mind to his customers at the Coborn’s grocery chain for nearly a quarter century.

Paul Wannigman could be in Hawaii right now. Before the recession hit in the 1970s, he had plans to follow his father to the Aloha State and build condominiums for his family’s construction business. Unfortunately, the business went bust. But everything happens for a reason, he says. 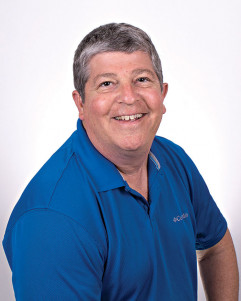 Instead, the 56-year-old works almost 4,000 miles north in the wintry climate of St. Cloud, Minn., at Coborn’s Inc., and he’s on top of the world. As Print Services manager for the grocery chain’s in-plant, he manages a staff of two full-time employees and an all-digital shop that keeps the $2 billion company stocked with printed products.

He also takes regular trips south of the border to Mexico to warm up.

Wannigman began working at Coborn’s as a pressman 24 years ago, but he actually trained the in-plant’s first employees long before then.

After he graduated from St. Cloud State University (SCSU) in 1983, Wannigman worked for five years repairing and maintaining AB Dick 369s for a company called Cyberstar. A natural teacher (it runs in his family), he was also tasked with training people to run the equipment.

“I’ve always said I could train anybody,” Wannigman explains.

Indeed, one of the public school operators he trained on the press was hired by Coborn’s when it opened its in-plant in 1985. Wannigman even installed Coborn’s equipment while he was working at Cyberstar.

It was while he was working his second job at a copy shop that Coborn’s recruited him. He didn’t even have to apply.

While at SCSU, Wannigman had studied industrial education.

“I had never heard of graphic arts, print shops or anything like that,” he recalls. “I had no clue.”

But his mother was a teacher, his father was in construction, and it seemed like a good blending of his background.

“I thought I would be a wood shop instructor,” he says.

When he started taking graphic arts courses, he sucked information up like a sponge.

“For me, college was easy because I didn’t even have to study,” he remembers.

One particular professor was so impressed with his abilities that he named Wannigman his lab aide.

“When the professor was sick or couldn’t come to class, he’d call me, give me his notes, and I would teach the class,” Wannigman explains.

“That’s a bunch of equipment for three guys,” Wannigman admits. “And everything is usually running at the same time, like a good choreographed dance.”

When something breaks down, Wannigman, who says he gets his mechanical aptitude from his father, is not afraid to go under the hood and find the problem.

“We have service contracts on all of our equipment, but I am the one who is sticking my head in, trying to figure it out before anyone else,” he says.

He estimates his team processes about 12 million sheets of paper per year. That includes sell sheets, product promotions and all the forms it takes to run a 9,000-person employee-owned company. “Our bread and butter — get it, we’re a grocery retailer — is coupon sheets and in-store signage,” Wannigman quips.

Coborn’s has about 50 grocery locations throughout Minnesota, but when its convenience stores and liquor stores are also taken into account, it owns about 120 businesses. That’s tremendous growth from its founding in 1921, when Chester Coborn opened a single produce market in Sauk Rapids, Minn.

Since all of the stores need more signs, Coborn’s is adding a sign shop to its in-plant. In October 2016, his team printed more wide-format jobs in one month than it had the previous 10 months combined, Wannigman says. Much of that work was outsourced, and bringing it in-house will save time and money. He’d like to hire another person to help with sign installation.

“Right now, we send them to the stores, and nobody knows what to do. It’s kind of defeating when you go to the store two weeks later and find your stuff sitting near the trash,” he admits.

Doughnuts help lift his staff’s spirits, though. The 3,900-sq.-ft. facility is located in the same building as Coborn’s central bakery, and Wannigman jokes that he plies his team with sweets.

Ice fishing is what lifts his own spirits.

“There is just something about traveling across one of our 10,000 lakes without a boat when the temperature is below zero with a fishing pole and my favorite beverage,” he shares. “Maybe the cold has damaged my thought process, but that is my second passion.”

He also builds wooden furniture in his “man cave” in his spare time. For a while, he was selling miniature oak tables and chairs for children, and with each sale, he put his money into tools and supplies. Now that his shop is built up, he just builds for fun.

Wannigman says his biggest success is his nature as a “Yes Man.” He lends a calming presence to frenzied customers who call with a project due yesterday.

“They know we’ll get it done on time, on deadline, just the way they want it,” he says.

He also said “Yes” to his wife more than 30 years ago and considers his family another great success. He has two sons, a daughter-in-law, and says he couldn’t be happier.

Is there really anything more to the good life than that?

BYU Print and Mail: A Constant State of Reinvention

END_OF_DOCUMENT_TOKEN_TO_BE_REPLACED
Subscribe
COVID-19 on In-plant Impressions
Reopening Of America: What Will This Look Like For Businesses Across The US