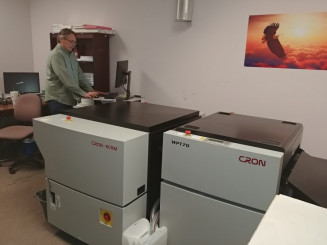 As one of several in-plants impacted when Presstek stopped making Freedom Pro printing plates for the Vector FL52 computer-to-plate system, San Bernardino Community College District (SBCCD) Printing Services was in a jam. Without plates, its  two- and four-color offset presses would have to be shut down. Was this the best option for the six-employee in-plant, known for its high-quality four-color products, such as flyers, brochures and magazines?

In search of an answer, the Redlands, Calif.-based shop began evaluating CTP systems. Last fall, it planted its flag firmly in offset territory by installing a CRON CTP Model 26H fully automatic platesetter from CRON-ECRM so it could continue using its Ryobi 524 and 3302 presses. It came bundled with the Blackwood Emerald UV low-chemistry plate system and the WPT70 low-chemistry wash-out unit. Since the in-plant started using the system in November, Printing Operations Specialist Dennis Winters has been extremely pleased with the results.

“It’s a lot faster and more efficient,” he says. “Like five times faster than the old one — we went from six plates an hour to 22 plates an hour.”

“A big difference is the plate loader,” he notes. “It loads by itself, one at a time, and keeps the press going. It’s continuous, which is a big savings on man hours — as much as a couple of hours a day. So right off the bat it was so much more efficient; just push a button and let it go.”

There are other benefits too.

“The best part is slip sheet removal," he says. "This thing removes the sheet between each plate that comes from the factory, so saves us time.”

“We saved $400 a box right off the top with this equipment,” says Winters.

Service is a benefit SBCCD wasn’t expecting to be as big a positive as it turned out to be.

“[Our service guy] is always there when you need him,” says Sutton. “We can call any time, anywhere and he’ll answer. And he can take control of the machine on the Internet. That’s been great. We used to go round and round with service with the old one, but this one hasn’t needed to be serviced at all; everything has been figured out or done over the phone.”

In one case when the in-plant was having an issue, the service technician was able to log in and see that the cover wasn’t on correctly. He told the operators to adjust it, and they were back up and running in seconds.

“That has saved us not only service time, but has limited down time,” says Sutton.

SBCCD Printing & Graphic Services Supervisor Anna Mendez notes that the in-plant has not had any jobs returned or rejected since installing the CRON-ECROM 26H system. In fact, it has been so successful, that another in-plant came in to see it, and is now planning on upgrading its own equipment.

“We’re on a roll, which makes our job easier and better,” she says.

The new platesetter follows the installation of a new Mutoh ValueJet 1324 wide-format printer and cutter last year, which the shop is using to print and cut stickers, wall and floor decals, window clings, banners and posters.

ISO 32000 PDF Specification has Been Updated to Version 2.0

END_OF_DOCUMENT_TOKEN_TO_BE_REPLACED
Subscribe
COVID-19 on In-plant Impressions
Reopening Of America: What Will This Look Like For Businesses Across The US