Should You Invest in G7?

In today’s world of razor thin margins, every production advantage that gains you profitability, even if it’s incremental, is a win. The ability to achieve consistent color more quickly, especially across devices, is one of them. This is why increasingly more in-plants are choosing to implement the G7 standard.

Why G7? There are many ways to measure and standardize color (e.g., ICC profiles, SWOP, GRACol*, FIRST), but the variation inherent in digital production, along with the variation in substrates and inks, makes precise, consistent color matching difficult to achieve. It is even more difficult across processes.

This is where G7 comes in. Developed by Idealliance, G7 defines gray balance in terms of tonality (lightness and contrast) and balance (neutrality). This creates parity among printing processes regardless of ink or substrate, and allows printers whether in-plant or commercial to adjust any press or printing system to a common neutral appearance.

This common neutral appearance is the basis on which consistent color is achieved. Consequently, G7 in-plants report being able to match color dead on, even when jobs are being printed using different processes, on different substrates, and at different locations.

“G7 gives us color consistency and process control that is difficult to get any other way,” says California State Printer Jerry Hill, who oversees California’s Office of State Publishing, in Sacramento. The operation prints to G7 standards on four of its main presses: its six-color, 40˝ Heidelberg sheetfed press, its eight-color, 38˝ Heidelberg M1000 web offset press, an HP 10000, and a new Ricoh Pro VC60000 continuous-feed inkjet press.

“We use SWOP and GRACOL, too, but G7 is the underlying ‘how’ for achieving those consistently,” explains Hill.

What Is G7 Really?

While many associate G7 with commercial printing, Jordan Gorski, VP of global certification programs for Idealliance, says it has tremendous value to in-plants, as well.

“This value depends on how important consistent, accurate color is to your customers,” Gorski explains. “How color critical are they? Who is making the decision that a job is good enough? Without a way to achieve consistent, objective, verifiable color, you cannot promise customers anything they can count on.’”

At California’s Office of State Publishing, for example, Hill knows this all too well. Back when he was working in the commercial world, Hill won a food catalog project from a restaurant chain based on the importance of this consistency. Initially, although the chain knew the quality of the work produced by Hill’s company, his competitor won the bid based on price, but then his competitor couldn’t hit the colors.

“At that point, they came back to me and said, ‘We should have given you the job to begin with,’” says Hill. This is why G7 is a must for him now. “Not having consistency is not a risk I want to take.”

Color: Not Just An Opinion

Color consistency was also a driving factor in the University of Nebraska’s decision to go G7. The Lincoln, Neb., operation is G7 qualified on all of its color printing equipment, which it uses to churn out pieces for University of Nebraska campuses as well as outside entities like the State of Nebraska and the Department of Tourism. The in-plant is G7 qualified on its six-color 40˝ and 29˝ manroland presses, all of its digital color equipment (Canon imagePRESS 700/800s, a C8000VP, and a 10000), and its HP wide-format printers. 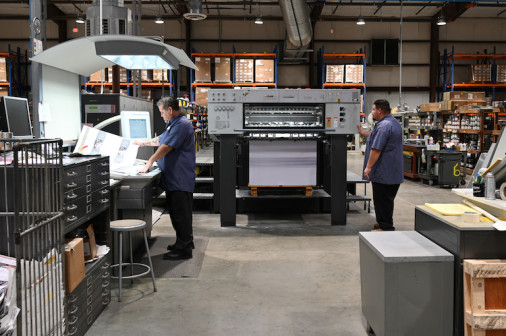 “Color should not be one person’s opinion. It should be objective and factual,” insists John Yerger, director of Printing Services. This is important for Yerger’s shop because it runs color-critical jobs for 450 departments, including Admissions and Athletics.

The in-plant relies on its X-Rite i1iSis 2 XL spectrophotometer to speed the process of calibration over using a manual scanner.

If you qualify as a G7 facility, does this mean you must qualify all of your presses? No, you can choose to qualify every press or just certain devices.

“But the risk is that if you take the job and run it on another press and it doesn’t match, customers will ask questions,” notes Gorski of Idealliance. “That’s when fingers start pointing.”

At the California Office of State Publishing, G7 is used on all jobs, but it is particularly important when jobs are spread across processes. Whether it’s a reprint or a multi-component job split across offset and digital (such as covers on the sheetfed press, and text on the web press), the colors must match dead on.

“We’ve used G7 for years to give us quality control that goes across platforms from short run, to medium run, to long run,” says Hill. “To meet that high level of consistency, our gray tones must always be in line.”

G7 is also helpful when in-plants are outsourcing jobs (or components of jobs). The University of Nebraska, for example, outsources its web work for longer-run magazines. By using only G7-qualified web press partners, Yerger has the peace of mind knowing that all of the colors will match, whether they are printed in-house or not.

“If we send it out to one of our partners, it must look the same as if we printed it here,” says Yerger.

While some shops use the full G7 qualification, others run to G7 standards for process control even without qualification. Allen Hancock College, in Santa Maria, Calif., is among them. In addition to its black-and-white Canon varioPRINT 140, it runs two full-color Canon devices, the imagePRESS C800 and C850, both of which are G7 qualified.

“Before G7, we were frustrated that we couldn’t control color,” says Gordon Rivera, supervisor of Campus Graphics. “We’d run a proof, the customer would approve it, and when we’d run the job, the color would be different. Now we can hit the approved colors each time.” 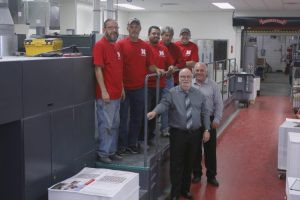 In addition to the benefits for process control, G7 has another benefit, as well — it eliminates those uncomfortable conversations with customers who don’t understand color.

“Our customers only understand color as what they see with their eyes,” says Rivera. “They just look at it and say, ‘This isn’t my red,’ even if their red is not achievable in the gamut of CMYK.”

For some of the in-plant’s more color-savvy customers, Rivera has brought them to laptops showing the color gamuts on his presses and said, “‘This is the color universe of what you can print. Your color is outside of here.’ Sometimes it’s an ‘ah ha’ moment for them,” he explains.

Eventually, Rivera plans to start doing more commercial work, and at that point, he wants the in-plant to be fully G7 qualified. Most likely, this will be within the next three years. “If we can’t provide a contract proof that says this is the color we will produce, we can’t move to the next step of higher-end commercial work,” he explains.

Despite its benefits, running to G7 can be an adjustment, especially if the change causes colors to shift from what customers were previously experiencing, so get ready for some growing pains.

“The first year was toughest,” reveals Yerger. “Once we started running to G7, some of the colors radically changed. Our customers asked, ‘What happened?’ We had to say, ‘This is what the color should have been before.’ We had to have this conversation for about six months, but once they saw that the colors matched from then on, they said, ‘I get it. I understand.’”

As with all growing pains, the results are worth the effort over time. In addition to the consistency, G7 also saves money, including helping in-plants reduce waste, get up to color more quickly, and increase their revenues by allowing them to take on additional work.

But it is perhaps the benefit of eliminating risk that in-plants notice first.

“Even though it involves more time and expense, the risk isn’t moving to G7,” Hill concludes. “It’s the risk of not doing it. If you have to reprint a $100,000 job because it doesn’t match the previous run, that’s a high price to pay. We don’t want to be penny-wise and pound foolish.”

How to Become G7 Qualified

If you want to qualify for G7, what does that entail? Here’s a quick checklist:

Ensure your workflow can support G7. The architecture is different from traditional workflows. Think of it like the difference between standard and metric.

Pick your G7 expert. In-plants can qualify their own experts or hire consultants to handle the qualification and calibrations for them.

Allocate time for training. Certifying a G7 expert takes two to three days depending on whether it is a group program or a private one. Qualifying a plant depends on the number of devices being qualified and the workflow, but it usually takes no more than a week.

Allocate the resources. The cost for a G7 expert is $2,500 for a two-year certification. For plant qualification as a G7 master, cost starts at $800 for the first device, with the price going up for additional devices.

Get tested. Once qualified, the G7 expert calibrates the presses, runs test sheets, and submits them to Idealliance, which uses RIT’s Printing Applications Lab (PAL) to approve the files. For in-plants wanting even more independent verification, Idealliance offers G7 Process Control, which requalifies the location quarterly.

Decide on a maintenance schedule. Once the in-plant achieves G7 qualification, make the most of it and keep the presses printing to G7.  For some shops, this means calibrating presses once a week. For others, it becomes part of scheduled maintenance. For yet others, it’s done on an as-needed basis.

Give Your Business a Boost with Wide-Format Tech and Services