Working With the Next Generation: Be Clear, Be Concise

The next generation has entered the workforce. Whether Millennials or Generation Z, these “digital natives” think differently than most in-plant managers, which at times has earned them a bad reputation. They have been called lazy, self-centered, even rebellious, but if you know how to interact, train and work with these younger employees, they can be a very productive part of your in-plant’s team.

Whether you have student workers in your in-plant or are hiring recent grads to work in your shop, there are some things you need to know to successfully utilize this “work smarter, not harder” generation.

Put It in Writing

Millennials and Gen Z workers have been categorized unfairly as lazy, but really they just need clear direction. The best way to do that is to put rules in writing so there is absolutely no grey area. 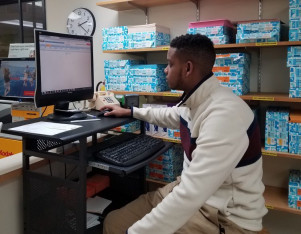 “I feel like we have forgotten what it’s like when we’re new. At that age, we don’t know things, and we do need rules and established timeframes,” says Cathy Skoglund, senior director of the Print and Imaging Lab at Arizona Sate University in Tempe, Ariz., where she has 28 student workers. Managers tend to give younger workers too much flexibility and not enough instruction, she notes.

“We don’t give them exact directions on what we need from them and talk to them constantly and provide constructive criticism and feedback,” she says. This is what they need, she adds.

At Gustavus Adolphus College Print and Mail Services in St. Peter, Minn., Director Naomi Quiram oversees 35 student workers. She’s noticed that they often focus not on the needs of the department, but more on what is convenient for them. If they don’t have class from 10:00 - 11:30 a.m., that might be a time when they want to eat.

“They focus on those kinds of things,” she notes. “So, I’m always having conversations about time management, responsibility and commitment to work. This is a job. This isn’t paid study time. This is student employment.”

A few years ago, Quiram had to establish a dress code and print it out, because the student workers would push the envelope, testing to see whether she would actually enforce what she was saying.

For instance, every year she has a discussion about which clothing is appropriate. Anything promoting alcohol or that would make someone else uncomfortable is not allowed. But even common-sense things like wearing shoes needs to be explained.

“One time, I got a call from campus safety saying a student was doing a mail run barefoot and they were concerned,” Quiram recalls. “They’re on the clock, and it becomes a work compensation issue.”

A few years back, ASU’s Skoglund had a student worker who was going through some financial difficulties and the 25 hours she was allowed to dole out was not enough to catch him up on tuition payments. So, over the summer she reached out to a local printing company and set him up with a paid internship for 20 hours a week. By then he had been working at the in-plant for a couple of years and was a great employee, so she had complete faith in vouching for him. 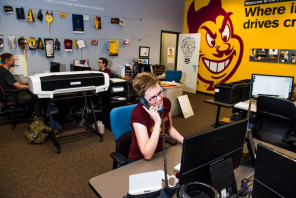 Some of the 28 student workers employed at Arizona State University’s Print and Imaging Lab (from left): Dane Reynolds, Casey Harvill and Bailey Vidler.

“After two weeks they called me and said, ‘We’re not having success with him, and we’re thinking about laying him off,’” she says. “I was like, ‘What? That doesn’t sound like him.’”

The company said, “Well, you know, he comes in whenever he wants, he leaves whenever he wants. And, the other day, he said ‘traffic is going to be really bad and I’m driving a motorcycle so I need to leave at 3:00 p.m. so I can miss rush hour.’”

Thinking back on her experience with student workers, Skoglund replied, “Well, did you ever tell him what his schedule is? Did you ever have a conversation with him that he starts at 8:00 a.m., he can’t be late and that he leaves at 5:00 p.m? Did you specifically tell him he gets one hour for lunch and he can either leave the premises or stay?”

Skoglund also went back to the student and asked, “What’s going on? How’s it going over there?” He said, “You know, I don’t have much direction. I’m not sure if I’m doing a good job. There’s one person who is my boss that I’m supposed to report to but she’s not really giving me any direction and some of the things that she does … she’s working hard, not smart, and I would like to give her some input, but you know, that’s not my place.”

After a second conference call with the company, they were stunned to hear this, Skoglund relates, and said, “Oh my gosh. We didn’t even think about it. You know, it’s been 20 years since we’ve had somebody in here who’s 20 years old.”

The company ended up establishing some guidelines, talking with the student and working it out.

“They absolutely love him now,” Skoglund reports. “They hired him two years in a row, and now he’s working there after graduation. That was an interesting learning experience for myself and that company. I’m sure they’re going to be more successful hiring younger people because of it.” 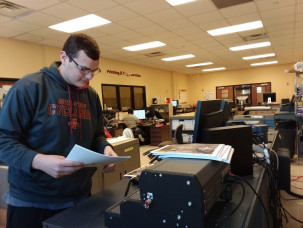 When it comes to this new generation, employers need to tell them to do tasks, not ask them, to get positive results.

“I’ve been doing this for 27 years, and with a full-time employee, you would ask them to do something, but with the student employees, you pretty much have to tell them to do something,” declares Jesse Turpen, Copy Center supervisor at Iowa State University in Ames, Iowa, where there are 31 students under his command. “Because if you ask them, they’re going to say ‘no.’ It’s like telling your child to clean their room. ‘Would you like to clean your room?’ you ask. ‘No!’ You tell them in a nice way, but don’t give them a choice.”

Some of this may stem from the way they were raised, notes Quiram, with parents stepping in to handle things for them rather than letting them take responsibility.

Many of them didn’t even fill out their college applications, she contends. They’re very comfortable letting someone else do things for them. That doesn’t mean you put them out in a lifeboat by themselves, she stresses, but you have to mentor and work with them so they aren’t lost.

Sharp as a Tack

“They love to go out into the community and say, ‘Oh, I saw you had a package today.’ It’s a service that draws positive attention to them,” explains Quiram.

They are tech-savvy for sure, notes Skoglund. “We are heavy on software and are always getting new stuff to learn. The students are very quick to pick up on that,” she says. “If I were to hire somebody that was 50 years old, they would really have a hard time conversing with Slack, an online communication tool for business, but the students pick it up fast.”

Speaking of fast, they are also quick at typing — on their phones and on the keyboard. They never had to take typing classes; they grew up with it.

“They were typing when they were three years old,” Skoglund says.

Software like Excel comes easy to these digital natives, adds Turpen, while the in-plant’s older employees, including himself, struggle with it from time to time. 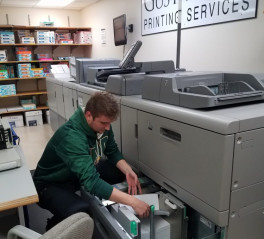 “Students come right in, and it’s like they’ve got the formulas memorized and they know all the little shortcuts and stuff,” he says. “They pick it up really fast, so it’s easy to train them. I can train a student employee in probably a third of the time it takes somebody my age. They are pretty sharp.”

The key to a successful working relationship with a younger worker is to mentor him or her closely. But do not give them a mentor in the shop who has been there 30-plus years and is set in his ways. Such a person is not going to listen to suggestions on how to do business better, or smarter. If a manager steps up to mentor, however, the benefits could be great. The higher-ups are more likely to listen to feedback and could gain some useful insight on how to change things for the better. Millennials and Gen Z employees are all about working smarter, not harder; take advantage of this.

“A lot of companies that hire our students, I let them know ‘make sure ... you’re at least providing feedback once a month or they’re getting to spend a few hours with you,’” says Skoglund. “If you want this to succeed, you’re going to have to put into it as well. It’s not like hiring somebody who’s been doing this for 15 years.”

Younger workers have to feel part of a team.

Personal Devices on the Job?

Whether it’s Twitter, Instagram, SnapChat or Facebook (though Facebook is now considered “old” by Gen Z standards) young people live through their phones. Because of this, employers find it hard to get the younger generation to look up from their devices and be present. This has led to in-plants creating clear-cut guidelines for technology use on the job.

“If you are out of the public’s eye and you are waiting for a process to be done, we don’t mind,” notes Jesse Turpen, Copy Center supervisor at Iowa State University. He allows employees to go on their phones or open a book and study; even laptops are O.K. But the moment that door opens, they are to immediately stop what they are doing and give their undivided attention to the customer.

As for music and earbud use, it depends. When students are out on a walking delivery route, it’s permissible to jam out to some tunes. But the moment they walk inside to deliver the package, those earbuds must be put away so the customer receives their undivided attention. However, if they are driving for a delivery, that is absolutely prohibited.

“You can listen to the radio in the van, but that’s it — no earbuds,” Turpen insists.

“We’re a place of service, and if you are using electronics, you’re not available to give 100% attention to the customer. You have to be able to do that to provide the best customer service you can,” she says. “So, what I do is make sure I have a machine available in each room that can play music, because I don’t think music in the background is a bad thing. It can be the music of their choice, as long as it’s appropriate for the public.”

At Arizona Sate University’s Print and Imaging Lab, students are not allowed to wear earbuds, but full-time employees can. Seem unfair? Senior Director Cathy Skoglund explains that students are always being talked to and receiving directions, which is difficult to do when their ears are plugged up.

Measure What Matters: 10 Guidelines to Help

Join us to find out how the latest color standard advancements and controls are being used to differentiate from the competition.