Technology Trends from the InfoBlog
June 28, 2016

Four Things That Really Surprised Me at drupa 2016

I’d already been briefed on a lot of drupa 2016 news before I left home so I wasn’t really expecting much to surprise me when I arrived in Germany. I was wrong. I’ll name four announcements or technology demonstrations that truly surprised me. I’d argue that each of these was strategically designed to make a simple statement to the effect of: "Hey everybody, we can do this." These types of developments are what make a mega-show like drupa so special. 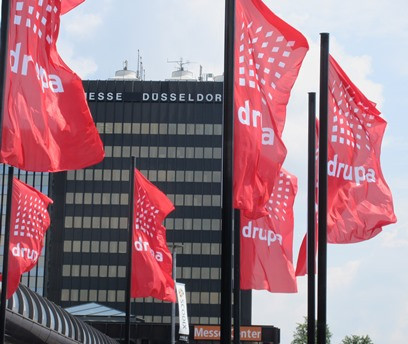 These are the items that caught me off guard:

Xerox/Impika KBA collaboration — Xerox devoted a section of its display to an inkjet collaboration with KBA’s sheetfed division for a 40" sheetfed digital printer for folding carton applications. This collaboration was announced shortly before the show opened, but it wasn’t until I arrived at drupa that the full impact dawned on me. The device, which is still under development, is called the KBA VariJET 106. It will be able to print 4,500 B1-format sheets per hour and has a modular design that will integrate inkjet printing with in-line options for coating, cold foil application, rotary diecutting, creasing, and perforating. The device was not shown at drupa but the statement was a significant one for a few reasons (and not just that I didn’t see it coming).

It is clear that Xerox has been leveraging Impika for document applications, but this news shows the expanded impact of the Impika acquisition (beyond even the new High Fusion inks for the Trivor 2400, which are an important step for Xerox because they open up the opportunity to print on coated offset stocks). The Xerox/KBA collaboration also underscores another theme that was evident across the Messe: the impact of wide inkjet arrays on many markets including folding carton and corrugated packaging. Other non-document applications that Xerox is using its inkjet technologies for include thermoformable plastic and printed electronics. 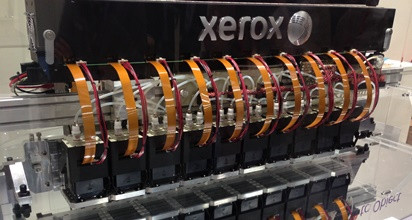 Canon Voyager — Canon showed a technology demonstration of a B2+ format, 3,000 sheet per hour, cut-sheet inkjet printer called ‘Voyager.’ The device is huge, which presumably is part of the intended statement. Canon’s point, I believe, is that if the company wants to make a high-quality and productive B2+ format device using its own inkjet heads, it can do it. Voyager is targeted at commercial and photo print environments. It is one of four high-speed devices driven by EFI’s recently announced Fiery XB front end. In addition to Voyager, the Fiery XB was shown with EFI’s Nozomi, Landa’s S10, and Xerox’s Trivor. Keep in mind that Voyager was a technology demonstration and no product is expected until 2018.

MGI AlphaJet — Those of you who saw AlphaJet at drupa in 2012, know that it bears little resemblance to what was shown at drupa 2016. In particular, the race track concept for the paper path is unlike anything I’ve seen in printing where straight paper paths are typically valued because of their implied reliability. In this case, having a circuit allows the sheet to go around multiple times if, for example, it requires multiple hits of clear UV ink for a dimensional effect. This means that it’s more of a station-based modular process that brings a manufacturing perspective to industrial printing. Including a station for printed electronics is another indication of this. The news also shows the impact of MGI’s Ceradrop acquisition.

HP Indigo Digital Combination Printing — This technology demonstration combined an Indigo WS68000 and a UV inkjet unit developed by JetFX for a label printing application. It’s a good example of the types of special effects/embellishments that were all over the drupa show floor. What differentiated this tech demonstration for me was that it represented a hybrid printing example using liquid electrophotography and UV inkjet. Most of the hybrid combinations I have seen so far have involved inkjet (usually aqueous) and offset. This combines the manufacturing capability of offset with the variable capability of digital print.

Why then would you make a hybrid combination of two digital printing methods? The answer is that the JetFX unit was adding effects that UV inkjet can do more effectively than electrophotography. In this case those effects are spot gloss, dimensional, foil, and white. Combining electrophotography with UV inkjet has been done previously, but here it was inline, and that’s the piece I found particularly interesting. This example shows how HP Indigo is pursuing multiple methods of achieving special effects. Also on the HP stand were Indigo partners Kurz and Scodix that have shown similar effects offline. 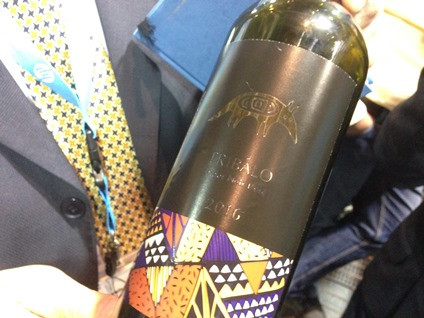 In closing, why did these surprise me? They were unexpected. They showed new directions and capabilities. Some underscore the fruits of acquisition. All were specifically intended to open eyes. Of course there were many other impressive developments at drupa, some innovative or intriguing or even surprising, but these four stood out for me because they symbolized the spirit of what many exhibitors try to achieve at drupa.