Technology Trends from the InfoBlog
February 6, 2018 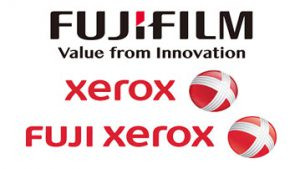 The grapevine has been ripe the past weeks, but now the news is finally out. Fujifilm has entered into a definitive agreement to purchase the majority holding of Xerox Corporation and will merge Fuji Xerox with Xerox.

The two companies said that Fuji Xerox, a joint venture between Fujifilm and Xerox formed in 1962, will use bank debt to buy back Fujifilm’s 75% stake for around $6.1 billion. Fujifilm will use those proceeds to purchase 50.1% of new Xerox shares. Plans are to complete the deal around July-August of this year.

The new entity, to be called Fuji Xerox, will become a subsidiary of Fujifilm, with dual headquarters in the U.S. and Japan. It will keep Xerox’s listing on the New York Stock Exchange and will be led by Xerox CEO Jeff Jacobson and Fujifilm Chairman Shigetaka Komori.

Xerox has struggled to grow its document technology and related business over the last four years with 2017 revenue ($10.3B) down 19% compared with 2014 ($12.7B). Spurred by activist shareholder Carl Icahn, who owns approximately 9.7% of Xerox shares, Xerox spun off its business process outsourcing business in 2016 to focus on its core. Mr. Icahn has been vocal recently about seeking significant changes to Xerox’ board of directors, senior management, and the Fuji Xerox joint venture with an eye on a potential sale of Xerox in the future.

There are also significant opportunities for cost savings and leveraging of core technology and go-to-market assets. Xerox noted in its quarterly earnings announcement that it anticipates $1.7B in cost savings (in addition to the current planned Xerox transformation savings) over the next four years from the combined company. Initial reports suggest that 10,000 jobs at Fuji Xerox will be eliminated, a fifth of its global workforce, through consolidation of manufacturing, field, and administrative functions.

Fuji Xerox and Xerox have closely aligned their R&D spending and product development efforts for many years, but the combined entity will have even deeper integration and access to many of Fujifilm’s core technologies in inkjet, materials,  imaging, and artificial intelligence.  In  making the announcement, Xerox notes, “the new Fuji Xerox will be well-positioned to lead in growing areas such as high-speed inkjet, packaging, industrial print and workplace automation, as well as future development opportunities in artificial intelligence, machine learning, internet of things and augmented reality.”

The re-alignment of the office and production printing industry continues. While some may view the timing of this decision to sell as defensive in nature, InfoTrends believes Xerox is making a smart move to combine assets with long-time partner Fuji Xerox under a strong parent company with deep financial and technology resources.

2018 will be another transition year for Xerox but should allay any concerns customers or business partners may have about the long-term vitality of the company. We anticipate the organizational changes will move along quickly and that the combined company will soon begin to rationalize and expand its product portfolio.

Fujifilm has proven to be very astute over the last 15 years as it navigated through the rapid demise of its traditional photographic film business by making investments in core technologies and selective acquisitions in graphics (Sericol, Dimatix) and medical/bio technologies (Sonosite, TeraMedica, Cellular Dynamics). The company now has control over a vast portfolio of patents and R&D labs, global distribution and field service, and strong brands and marketing operations, along with the financial resources to take a long view on markets as well as be opportunistic on acquisitions.

Deborah Hawkins and Barbara Richardson contributed to this blog.

Pantone Introduces Its 2023 Color of the Year
END_OF_DOCUMENT_TOKEN_TO_BE_REPLACED